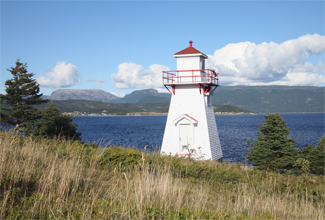 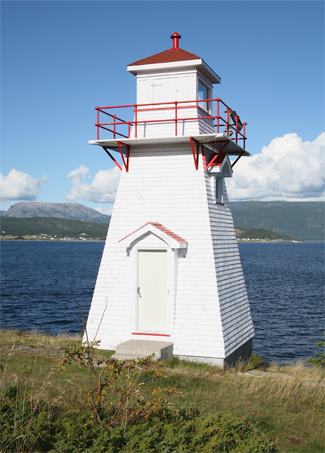 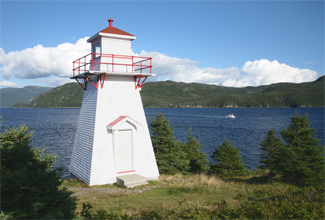 Woody Point, situated on the western shore of the South Arm of Bonne Bay, was considered the early capital of the West Coast of Newfoundland. The settlement was the centre of law and government, and had a government Bond Store where all vessels had to clear customs.

In 1919, a square, pyramidal, wooden tower was built at Woody Point on land purchased from George Parsons for $150. The white tower was topped by a red lantern, and its acetylene gas light flashed red twenty times per minute. The site where the tower was erected was known as Curzon Head.

A fire swept through Woody Point in 1922, destroying fifty-eight structures. Though the lighthouse was spared, the town never recovered its former status, and with the opening in 1925 of a pulp and paper mill at Corner Brook, it became the dominant west coast community.

Woody Points light operated on acetylene gas until 1923, when it was damaged by fire and replaced by a fixed red kerosene light, shown at a height of 13.7 metres (45 feet) above high water. By 1952, a new wooden tower with an integrated lantern room had been built at Woody Point. The tower that marks the point today was erected in 1959. At this time, the light was changed to a battery-operated light, and Fred Parsons, the last official keeper, retired. William M. Parsons served as caretaker of the light until 1966.

For a larger map of Woody Point Lighthouse, click the lighthouse in the above map.