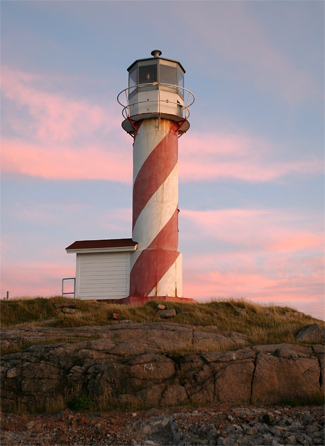 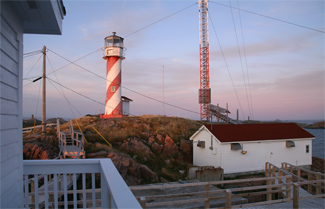 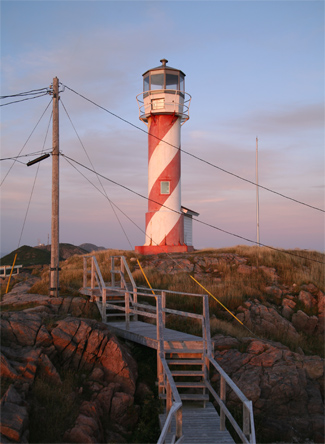 The Ramea Islands are located off the southwest coast of Newfoundland, roughly twenty kilometres from Burgeo. This cluster of islands consists of two large islands, Northwest Island and Great Island, to the north and numerous islets, rocks, and shoals to the south. While several of the Ramea Islands have been inhabited in the past, the only settlement today is on Northwest Island.

There is some controversy over the origin of the name of the islands, which has been spelled over the years as Ramie, Ramée, and Ramea. Rames is an old Norman world for wild vetches (vetch being a twining leguminous plant), and as these plants are found throughout the islands, it is believed they might be the origin of the name. Another theory is that Ramea is an anglicized version of Rameau (branches) and refers to the many inlets and waterways found amongst the islands.

The first recorded settlers in the Ramea Islands arrived in 1822, and in 1836 there were twenty-nine people in Ramea, most engaged in the fishery. In 1871, George Penny and his brother, John, established a fishing business at Ramea known as John Penny & Sons. George Penny was an astute businessman and built a small shipyard where vessels were constructed for his fishing fleet. These ships included the Shamrock, the first vessel on the south coast equipped with a gasoline engine.

A lighthouse was constructed on the southern end of Northwest Island, known as Northwest Head, in 1902 to serve the local fishermen. The station consisted of a cylindrical iron tower, painted spirally with red and white bands, that was attached by a covered way to a white, flat-roofed dwelling. A small white store with a black roof was situated fifteen metres south of the dwelling. The tower exhibited an occulting white light, with alternating 1½-second periods of light and darkness, at a height of thirty-eight metres. A landing at the base of the rocky headland equipped with a derrick for offloading supplies was linked to the station by a tramway.

John Chaffey, originally from England, had been living in Great Jervois, Newfoundland before following the Pennys to Ramea after they established their business there. Chaffey was hired as the first keeper of Ramea Lighthouse. George Rossiter of Ramea was sent a letter on August 20, 1902, informing him of his appointment as assistant keeper at an annual salary of $150.

When George Penny died in 1929, his nephew, George Penny, Jr., took over the business and successfully guided the company through the depression before converting it from a salt fish to a fresh fish operation in 1942. George Penny, who had campaigned for Newfoundland to join Canada, was appointed one of Newfoundlands first three members of the Canadian Senate on August 17, 1949, shortly after the province became part of Canada. The new Senator passed away unexpectedly on December 4, 1949 in Ottawa at the age of fifty.

Georges widow, Marie, assumed control of the business, which had a fleet of ten draggers and a supermarket. Marie was known as Queen of the Fishing Fleet and was the first woman to be elected President of the Fisheries Council of Canada. After Maries passing in 1970, Margaret, the daughter of George and Marie, ran the company with her husband Spencer Lake, who also came from a prosperous fishing family.

The fish plant in Ramea closed in 1993, a victim of the fishery moratorium. Visitors to Ramea today can stay at Four Winds, the home built by George and Marie Penny that operates as a bed and breakfast.

In the 1950s, Air Marine Services installed a radio beacon near Ramea Lighthouse to aid vessels and aircraft. A diaphone foghorn was installed in 1952, and a keeper and an assistant were employed to tend the fog alarm and monitor the radio equipment and light.

The lighthouse was converted to commercial electricity in 1970.

For a larger map of Northwest Head (Ramea) Lighthouse, click the lighthouse in the above map.

Northwest Island can be reached by car/passenger ferry from Burgeo with a crossing time of roughly one hour and twenty minutes. A distant view of the lighthouse is possible from the ferry, but you really need to walk Lighthouse Trail that takes you around the perimeter of the southern part of the island. To reach the trailhead that is the closest to the lighthouse, follow the road around the harbour from the ferry landing and continue southwest until the road ends.


The sun was getting low in the horizon as we approached the Ramea Islands by ferry, and knowing that rain was predicted for the next day, I thought we better try to hoof it out to the lighthouse before sunset. The Google map above shows the ferry coming around the southern end of the island, but that is not what it does! I was thinking we would get some good shots from the ferry, but it actually goes around the northern end of the island. We didn't bring our car, so we briskly walked 0.9 miles to reach the trailhead and then continued another 0.6 miles on the boardwalk to reach the lighthouse. We arrived just in time for sunset and were glad that we had broken a sweat to reach the lighthouse that night as it was overcast and sprinkling the next morning. It is fun to hike the entire length of the boardwalk trail - the other trailhead is near the wind turbines.