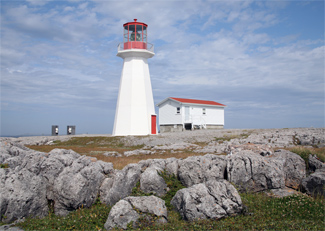 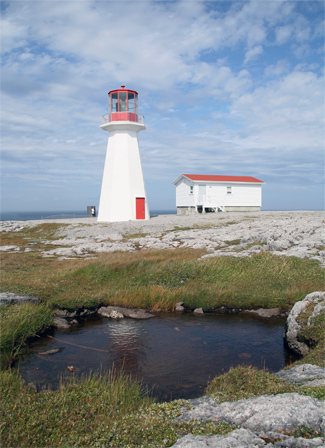 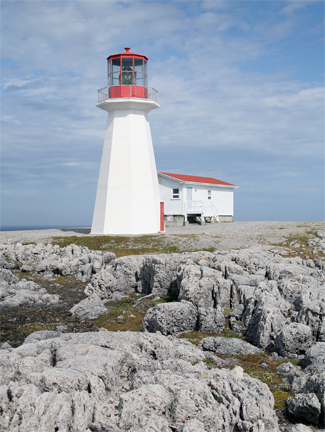 Situated at the tip of the Great Northern Peninsula, Cape Norman is the northernmost point of insular Newfoundland. Nearby Cape Bauld does lie further north, but it is on Quirpon Island and not part of Newfoundlands main landmass. Cape Norman was named Cape Normand by French explorers from Normandy, as the capes distinctive high cliffs reminded them of their homeland, but the name was later anglicized to its current form.

In 1870, the Department of Marine noted that the following year lighthouses at Cape Norman and Point Rich would be activated to mark, respectively, the eastern entrance and western entrance to the Straits of Belle Isle. With these new lights and the two first-order lights established in 1858 at Belle Island and Point Amour, the department felt the straits would be tolerably well lighted. The following reasoning was given as justification for these additional aids: As the Straits of Belleisle are now very much used by the Ocean Mail Steamers of Canada, and other vessels anxious to shorten their passages between the St. Lawrence and Europe by one or two days, it has been considered by this Department, and many persons interested in the commerce and navigation of Canada, to be of the greatest importance that this route should be made as safe and efficient as first-class lights and correct soundings can make it, with the view of carrying out the Canadian policy of making the St. Lawrence the great highway to the west, and of enabling our ocean steamers to compete successfully, both as regards speed and safety, with their powerful rivals running between European ports and ports on the Atlantic seaboard.

The need for a light at Cape Norman had been felt for some time. John Page, Chief Engineer of Public Works for Canada, wrote the following in 1860, after a visit to the cape:

To promote the safe and facile navigation of the Strait, no point, in my opinion, could be more advantageously selected for the erection of a Light House than Cape Norman, and it is admitted, by all the seafaring gentlemen, with whom I have had an opportunity of conversing on the subject, that it would in point of importance be second only to those already established. A fact which will be evident to any one, on bearing in mind, that, in moderately clear water, a vessel, from the time she entered the Strait, at either end, would be constantly in range of one or other of the Lights, consequently at all times, her relative position could be correctly ascertained.

Upon being contacted by the Government of Canada, the Governor of Newfoundland wrote that his government would give a free grant of land for the lighthouse and accompanying dwelling and afford every facility towards the accomplishment of such desirable undertakings.

Work on Cape Norman Lighthouse, a wooden, hexagonal tower that measured forty feet from base to vane, began in 1870, and the light was exhibited for the first time on October 1, 1871. To distinguish the light from the fixed lights at Belle Isle and Point Amour, a revolving catoptric lighting apparatus, having two faces each with three lamps and twenty-inch reflectors, was used to produce a white flash every two minutes. With the added height of the cape, the light had a focal plane of 138 feet. The total cost for the tower, lantern, lighting apparatus, and dwelling came to $10,141.96. Henry Locke, a resident of the locality, who had been highly recommended, was appointed first keeper of the light at an annual salary of $500.

At 10:20 p.m. on August 4, 1889, the steamship Montreal of the Dominion Line ran aground on Belle Isle during a thick fog. Before striking the island, the vessel had been proceeding at a slow speed with soundings taken at regular intervals. One can only imagine the anxiety felt by the crew, as they kept watch for icebergs, of which there were many in the area, while trying to blindly make their way through the straits.

With the fore and main holds starting to fill with water, all the passengers and crew were safely put aboard lifeboats within twenty-five minutes of the grounding. Nearly three hours later, the flash of a gun was seen, and the crew then knew they were on Belle Isle. Fishermen altered Keeper Colton of Belle Isle South End Lighthouse that a vessel had run aground on the island, and the men at the station hastened to assist the victims. By daylight, all the lifeboats had arrived at the station, and the lighthouse, storehouses, and sheds were used to accommodate the unexpected visitors.

Keeper Colton left his wife in charge of the station with instructions to fire the fog gun, and William H. Smith, who investigated the wreck, had the following praise for her: For a woman to leave the lighthouse on such a dark and foggy night to load and fire a gun some distance from the dwelling required an amount of courage seldom found in the sex, and she should be commended for it.

On the 9th of August, wreckers boarded the Montreal, defying its crew, and started plundering the vessel. They swarmed over the ship, stripping it of its sails and gear, and then with hatchets tore up large portions of the deck to get at the cattle, sheep, butter, cheese, and coal stored below. While this was transpiring on the Montreal, others hunted down the cattle and sheep that had been safely offloaded onto the island, and after slaughtering them dragged their carcasses down the islands cliffs and loaded them aboard their boats.

The loss of the Montreal prompted the erection of a steam foghorn at Cape Norman that went into operation a year to the day after the shipwreck, sounding a five second blast in every forty seconds when needed. The timber and material for the fog alarm building were unloaded at Cape Norman on July 19, 1890, and the following day, a Sunday, the workmen attended divine service in a small church in Cooks Harbour, three miles from the lighthouse. The little church was crowded with attentive listeners, wrote one visitor from the lighthouse. We found the fishermen in all the coves about here were most particular in their observance of the day, and none of them would fish or hire any of their boats out upon that day.

John Campbell from Pictou, Nova Scotia, who had worked with steam engines on boats on the Saint John River and in Quebec, oversaw the installation of the steam fog alarm at Cape Norman, and then remained at the station to care for the alarm. Campbell took charge of the light as well when Keeper Locke retired, and since then five generations of Campbells have served as keepers.

In 1908, a new wooden fog alarm building, housing machinery to operate a three-inch diaphone, was completed, along with a new double dwelling for the keepers. The following year, $3,373.89 was spent on reinforcing the new lighthouse. Wire stays were used to stabilize the original wooden lighthouse in 1874, shortly after it was built, and now the iron tower was encased in concrete with six flying buttresses providing additional support. The fog alarm was converted from steam to oil in 1923.

Two new dwellings were built at the station in 1956: a two-storey, four-bedroom residence for the head keeper, and a one-storey, three-bedroom dwelling for the assistant keeper. Twillingate Engineering and Construction was awarded a contract in 1963 to construct a new tower, fog alarm building, and landing storage shed, and demolish their predecessors. This concrete tower, which remains standing today, was completed in 1964.

The station was automated in 1992, and Alvin Campbell, a few years shy of his sixty-fifth birthday, was out of a job. Campbell purchased the remaining keepers residence and relocated it to a site on a ridge on Route 435 between Cooks Harbour and Wild Bight, where he could keep an eye on the station that had been home to his ancestors for over 100 years. The lighthouse remained automated for ten years, but there were apparently some glitches, and Alvins son Warren was hired as keeper in 2002. A small building adjacent to the lighthouse serves as the keepers office.

For a larger map of Cape Norman Lighthouse, click the lighthouse in the above map.