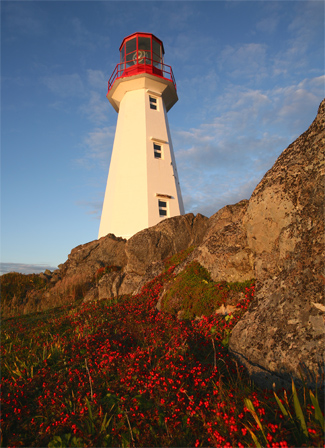 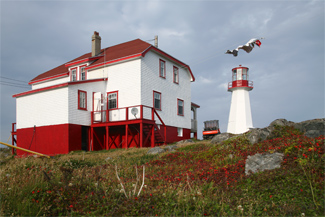 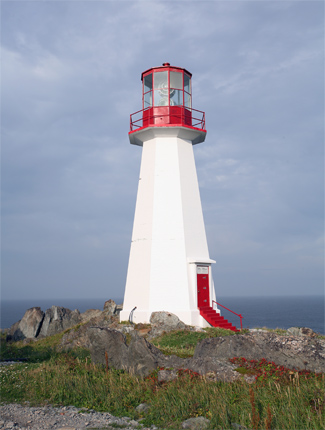 Situated at the northern tip of Newfoundland overlooking Iceberg Alley, Quirpon Lighthouse Inn is a prime viewing spot for icebergs and over twenty species of whales. To reach the inn, guests board a boat in Quirpon and travel to deserted Quirpon Island, where a short trail leads from the dock up to the lighthouse and its two keepers dwellings. If you stay at the inn, you are likely to be served a Jigs dinner, a traditional Newfoundland meal consisting of salt beef, boiled potatoes, turnips, carrots, and dumplings. Meals are enjoyed family-style, and after a few days spent with the locals who run the place, you feel just like family. The history of the lighthouse on Cape Bauld, as the northern end of Quirpon (pronounced like harpoon) Island is known, begins in 1860, when John Page, Chief Engineer of Public Works for the Province of Canada, published a report listing the advantages of various proposed lighthouse sites. Included in this report were the following four locations along the Strait of Belle Isle: Northeast end of Belle Isle, Cape Bauld, Cape Norman, and Point Ferolle. Regarding Cape Bauld, Page wrote:

The Cape is a well known prominent headland on the North point of Quirpon Island, and the N. E. extreme of the Coast of Newfoundland. It is 14 miles south of Belle-Isle and 18 miles east of Cape Norman.

The place considered the most suitable site for the necessary erections, in the event of its being decided to establish a Light there, is on the highest and most Northerly point of the Cape, 50 feet back from the edge of the cliff, N. E. 750, and S. 500 feet, from the water line, and about 240 feet over the level of the sea.

Page felt that lights were most needed at Point Ferolle and Cape Norman, as the light on the southwest tip of Belle Isle, established in 1858, provided many of the same advantages offered by a light at Cape Bauld. Cape Norman received its lighthouse in 1871, but mariners felt that a light and fog alarm at Cape Bauld were still needed to make the southern approach to the eastern entrance of the Strait of Belle Isle safer.

An appropriation of $5,000 was made in 1880 for a lighthouse on Quirpon Island, and the following year a contract was entered into with John A Askwith to perform the work for $4,775. Considerable progress was made during 1882, but owing to unexpected difficulties in the carrying out of the contract, the completion of the project was delayed until 1883. Even more difficulties must have been encountered as the light and fog signal were not placed in operation until August 15, 1884.

Built of wood, the lighthouse consisted of a square, sixty-foot tower attached to a keepers dwelling. A revolving catoptric lighting apparatus was used in the lantern room to produce alternating red and white flashes, spaced by forty-five seconds. The light had a focal plane of 141 feet above high water and could be seen for up to eighteen miles. The foghorn, operated by compressed air, was located in a building about 150 feet from the lighthouse. This signal produced a ten-second blast in each minute when needed. The total amount expended for the work was $8,675.71, and Alexander St. Laurent was appointed keeper at an annual salary of $800, out of which he was required to hire a duly qualified assistant.

In 1889, Captain Williams of the SS Oregon filed a complaint with the Department of Marine claiming that on either August 7th or 8th of that year, he was two miles off Cape Bauld and the fog was so dense that he could not see the lighthouse, yet the fog signal was not sounding. During the fall supply trip of the SS Napoleon III, William H. Smith visited Cape Bauld to conduct an investigation into the claim. Smith consulted the stations logbook and found that on the 7th and 8th there had been no fog at the station. There was fog on the morning of the 9th, and the foghorn was sounded for five hours until a rainstorm dispersed the fog.

Local fishermen interviewed by Smith stated that whenever there was fog in the vicinity, the alarm was promptly put in operation. Smith was a bit puzzled how Captain Williams could have been so sure he was two miles off Cape Bauld if he were enveloped in a dense fog. With no evidence found to support the claim, Smith exonerated Keeper St. Laurent and concluded that Williams must have an encountered a dense fog bank and decided he was near land when in actuality he was not.

In 1906, a diaphone foghorn was installed at Cape Bauld in a new rectangular building built sixty feet east of the lighthouse. The horn projected from the north side of the structure and sounded a seven-second blast in every forty-five seconds. The following year, work began on a new lighthouse to replace the old wooden one. A cast-iron tower, prepared in the Department of Marines Prescott, Ontario workshops, was shipped to the island and erected on a substantial concrete foundation. To protect and strengthen this tower, it was encased in cement and encircled with eight buttresses. Cape Bauld Lighthouse thus became one of the nine flying buttress lighthouses that were built between 1907 and 1912 while William P. Anderson was serving as Chief Engineer of the Department of Marine.

The new lighthouse measured fifty-six feet from its base to the apex of its lantern. A second-order Fresnel lens installed in the lantern room revolved once every fifteen seconds to produce a double flash in this manner: 0.56-second flash, 1.94-second eclipse, 0.56-second flash, 11.94-second eclipse. The illuminant for the light was petroleum vapour burned under an incandescent mantle.

The lantern room and top portion of the tower were removed from the old wooden lighthouse, but the dwelling portion continued to be used Bauld until a one-and-a-half-storey duplex was built in 1922. This rectangular dwelling is fronted by a long porch, and its hipped roof is interrupted with dormer windows. Each side of the duplex originally had a kitchen, living room, and four bedrooms, though one of the bedrooms was later converted into a bathroom.

The harsh environment at Cape Bauld takes its toll on structures, and after fifty years, the buttressed tower was starting to deteriorate. Rather than repair the old tower, a new octagonal concrete tower, which lacks the architectural flair of its predecessor, was erected in 1961 along with a new dwelling for the head keeper. Commercial electricity reached the station in 1966, and the fog signal, which had been converted from a steam plant to an oil plant in 1916, was replaced by an electronic signal in 1971.

When the government put the keepers dwellings on Quirpon Island up for sale in 1998, Ed English, a former employee of the Newfoundland and Labrador Department of Tourism, jumped at the opportunity to own such a unique piece of history. Linkum Tours was formed to operate the property as Quirpon Lighthouse Inn, which opened to the public in July of 1999. Encouraged by the success of the inn, the company added Cape Anguille Lighthouse Inn to its offerings in 2004.

The keepers duplex was declared a provincial Registered Heritage Structure in 2004, and three years later the lighthouse was made a Recognized Federal Heritage Building. With the historic importance of the station now officially recognized, the buildings will now be preserved for future generations to enjoy. If you are looking for a place to get away from it all, Quirpon Lighthouse Inn is an ideal destination.

For a larger map of Cape Bauld Lighthouse, click the lighthouse in the above map.

The keeper's dwellings on Quirpon Island are operated by Linkum Tours as Quirpon Lighthouse Inn. Visitors are transported to the island by boat from Quirpon for overnight stays. Call (877) 254-6586 to make a reservation.

The lighthouse is owned by the Canadian Coast Guard, and the keeper's dwellings by Linkum Tours. Grounds open, tower closed.


A stay at the Quirpon Lighthouse Inn starts with a 45-minute boat ride from the dock in Quirpon. This journey provides time for bird and whale watching - and we did see samples of both. As our stay was in early September, we were past the prime iceberg viewing season (June is peak for icebergs, while July and August are best for whales and seabirds), so we weren't too disappointed when we didn't see any.

Here is a picture of a typical bedroom in the larger keeper's dwelling, and this was the view from the shared bathroom - not bad. Dinner and breakfast are served downstairs in the dining room. We were glad to have the chance to experience a Jigs Dinner, a Newfoundland tradition. Prepared by Madonna and Doris, the meal consisted of salt beef, boiled potatoes, turnips, carrots, and dumplings. Though our stay was brief, the hospitality we experienced at the inn made us feel like we were leaving family when it was time to board the boat for the return trip.