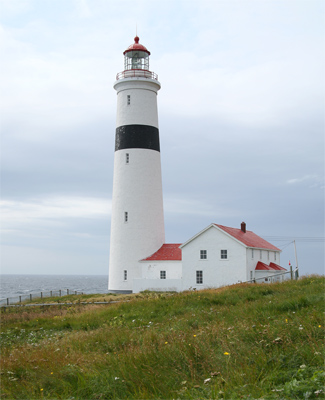 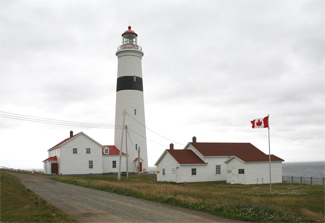 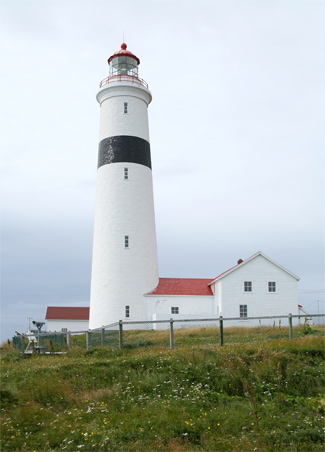 The Strait of Belle Isle, which runs between Newfoundland and Labrador for a distance of roughly 150 kilometres (94 miles), links the Atlantic to the Gulf of St. Lawrence and lies along the shortest route between cities on the St. Lawrence River and England. Sailing vessels, however, often took the longer route between Cape Breton and the southern shore of Newfoundland, which added roughly 320 kilometres (200 miles) to their voyage, as it was wider and free of icebergs and strong currents. With the advent of the steamship, more captains were willing to pass through the Strait of Belle Isle, and the Province of Canada decided to erect two lighthouses to mark the strait: one on the southwest tip of Bell Isle, near the eastern side of the strait, one at Point Amour on the Labrador Coast, near the opposite end of the strait. While the entrances to the strait were over 33 kilometres (21 miles) wide, at Point Amour the strait constricts to just 14.8 kilometres (9.25 miles). In addition to marking the narrowest point in the strait, Point Amour Lighthouse would also guide vessels to nearby Forteau Bay, considered the best roadstead in the straits.

In June of 1854, John Page, Chief Engineer of Public Works for the Province of Canada, selected a site for a lighthouse on Point Amour that was about 160 feet back from the waters edge and 55 feet above the sea. The previous year, François Baby, the proprietor of a tug line below Quebec, had been contracted to build substantial lighthouses at Point Amour, Belle Isle, Cape Rosier, and Anticosti Islands West Point.

In 1854, two quarries were opened in LAnse-au-Loup, three miles from Point Amour, and seventy toises of limestone were taken out for the lighthouse. Materials were landed at LAnse-au-Loup and transported by teams to the point, where a large wooden building was constructed for the workmen. During this first season, foundations were dug down to the solid rock in preparation for construction of the lighthouse and attached dwelling the following year.

Work on the tower was carried up to a height of twenty-five feet above the basement in 1855, and the stone keepers dwelling was all but completed. In order to expedite the project, arrangements were made to winter twenty-two men at the site so work could be continued four to six weeks later in the fall and commenced much earlier in the spring of 1856. During the winter, the men were kept busy dressing stone for the tower.

During 1856, the keepers dwelling was completed as was the tower, save the upper section and watchroom. The entire work at Point Amour, and the other three sites, was completed in 1857, and John Page made the following pronouncement regarding the lighthouses built at locations that were wholly uninhabited, and extremely difficult of access.

Indeed greater attention and care have been bestowed on the respective structures to render their stability certain than I ever expected, when there were so many difficulties to contend against; and in my opinion, the contractor is not only entitled to credit for the manner in which the work has been performed, but should be allowed a fair and reasonable profit on the expenditure, as the prosecution of the work has been far more onerous and perplexing than any human foresight could possibly have anticipated.

The lantern room, along with a second-order Fresnel lens, for Point Amour were procured from a Parisian manufacturer, which dispatched mechanics to oversee their installation. John B. Blampied was hired to serve as the lights first keeper, and the following notice was published to alert mariners to the establishment of a new light.

Point Amour, Labrador Coast, Strait of Belle-Isle. Southeast point of Forteau Bay. Fixed white light. Circular stone tower faced externally with fire brick of a light colour. 109.5 feet from base to vane. Centre of light 155 feet above high water. Second Order Catadioptric Light, 2/3 of the horizon illuminated. The Light will be exhibited for the first time on the 1st of April, 1858, and the lighting will be continued from sunset to sunrise from the 15th of April to the last day of each succeeding year.

The five mammoth, flat-wick-burner lamps used for the light consumed roughly 200 gallons of oil each season, while the fog gun, which was fired every hour during fog and snow storms, went through 1,500 pounds of gunpowder. In 1861, the lighthouse was covered with clapboards as severe frosts and easterly winds were having an injurious effect on the tower.

In 1878, a steam whistle from Cape Ray, Newfoundland, which had been replaced by a new fog alarm in a more advantageous location, was relocated to Point Amour and went into operation there on August 8, giving a ten-second blast each minute as needed. The old fog gun from Point Amour was taken to Greenly Island, where a lighthouse had just been completed.

A foghorn sounded by compressed air replaced the steam whistle in 1885. The new fog alarm was situated near the shore, 250 yards west of the lighthouse and 700 yards southeast of the old whistle building. The old fog whistle was kept in reserve in case problems arose with the new foghorn. In 1892, the foghorn was relocated to a point below and in front of the lighthouse, so it could be more distinctly heard up and down the strait.

Keeper John Blampied served for just over a decade at Point Amour, and then Pierre Godier took charge of the station in 1869. After ten years of service, Keeper Godier was set to be superannuated but before the replacement keeper, Matthew T. Wyatt, arrived at the station, Keeper Godier passed away.

A telegraph line was extended from Quebecs North Shore to Point Amour and on to Red Bay in 1901. Three years later, a Marconi wireless station was erected at the station, allowing ships to radio messages to shore for transmission to upstream communities like Quebec City and Montreal.

In 1903, the light source was changed to petroleum vapour burned with an incandescent mantle, and the lights characteristic was altered from fixed white to sixteen-seconds of light followed by four seconds of darkness. To produce this signature, which the light has kept to this day, an eclipser powered by a clockwork mechanism was placed around the light source.

Point Amour literally means Love Point, but its original name was likely Pointe-aux-Morts, or dead mans point, due to the numerous shipwrecks in the area. The establishment of a powerful light and foghorn on Point Amour reduced the frequency of shipwrecks, but some still occurred. On August 8, 1902, the 12,000-ton, 605-foot-long HMS Raleigh ran aground just west of the station. While visiting Newfoundland ports, the commander of the British warship decided to make a stop in Forteau Bay so the officers could try their luck in the Forteau River, which was known for its salmon and trout fishing. While approaching the bay in a heavy fog, the Raleigh had to sharply alter its course to avoid an iceberg and snagged its hull on a reef. A motorboat was launched to take a lifeline to shore, but it capsized in the surf, resulting in the drowning of ten sailors. One sailor did manage to get the lifeline to shore, and with the help of men at Point Amour, it was secured allowing the nearly 700 men aboard the Raleigh to come ashore.

Every square foot of living space at the station had to be used to house the unexpected guests that first night, but the surrounding communities pitched in to bunk the men until a vessel from Montreal arrived five days later to take the men back to England. In 1926, the Royal Navy returned and destroyed the remains of the stranded warship. Visitors to the station can follow the Raleigh Trail west to view pieces of the vessel that still litter the shoreline. A re-enactment of the wreck takes place each year on the anniversary of the grounding.

The stations original dwelling, which is linked to the tower by a covered passageway, was converted into a duplex in 1921. Additional keepers dwellings were constructed in 1954 and 1967, and the light was electrified in 1964. When Milton Elliott was serving as principal keeper in the 1960s, there were also two assistant keepers at the station and a marine radio operator, who, with their families, made a community of over thirty people. Point Amour Lighthouse was automated in the 1970s, and Max Sheppard, its final keeper, retired in 1996.

Point Amour Lighthouse, the second-tallest lighthouse in Canada, was designated a Classified Federal Heritage Building in 1987, along with the attached dwelling. The entire station is now a Provincial Historic Site, and visitors can tour the original dwelling, which serves as an interpretation centre, and climb the 128 steps to the top of the tower. Brass pieces salvaged from the HMS Raleigh are on display in the interpretation centre. One of the two modern keepers dwelling serves as a Heritage Research Centre, while the other houses a visitor centre and gift shop.

For a larger map of Point Amour Lighthouse, click the lighthouse in the above map.