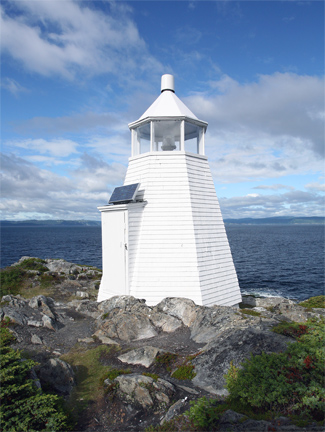 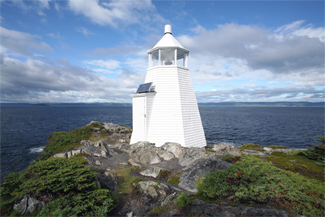 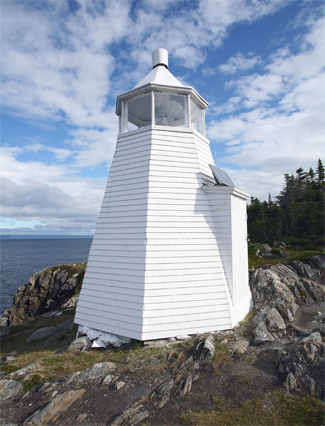 Westport Cove is also known as Western Cove, and a light, in the form of a lens lantern hoisted to an open framework, painted white, was established here in 1906. In 1911, the current wooden, octagonal tower was built and equipped with a sixth-order dioptric lens. Though the tower is only nine feet tall, its focal plane is thirty-three feet above sea level thanks to the lofty cliff on which it is perched.

In this 1922 photograph of the lighthouse, note that only the seaward facing side of the lantern room was equipped with glass panes.

The lighthouse has been used as an aid for inshore fishery and coastal navigation, when the coastal boats visited Westport. The tower's fixed white light operated on kerosene oil until 1969, when it was converted to solar power. The light's signature today is a white flash every four seconds. Four keepers minded the lighthouse from 1906 to 1989, and the Coast Guard is responsible for its maintenance today.

For a larger map of Westport Cove Lighthouse, click the lighthouse in the above map.

From Highway 1 at Sheppardville, turn north on Route 410. After 44 km (27.5 miles) turn left onto Route 411 and continue for 27.8 km (17.4 miles) to Westport. A 4-km-long trail leads from the community wharf up a steep set of stairs to a picnic area near the lighthouse and then continues along the rugged coastline exiting near the local church. The distance from the parking area at the wharf to the lighthouse is roughly 0.8 km.