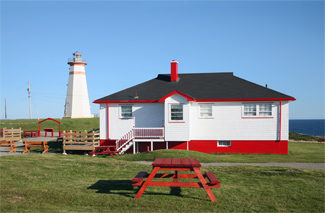 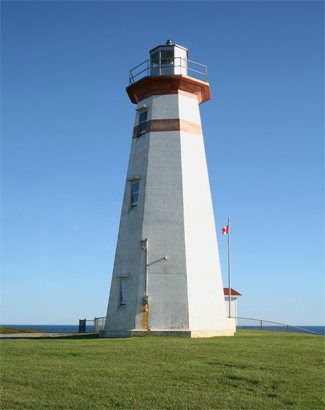 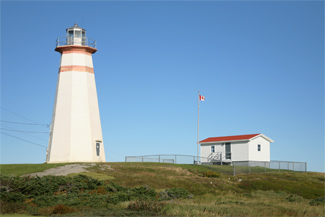 As the west coast of Newfoundland, from Cape Ray to Cape St. John, was reserved for French fishermen until 1904, it isnt surprising that Newfoundland had little interest in establishing lights there until after that time. The Province of Canada, however, did. Vessels sailing between ports on the St. Lawrence River and Europe typically passed through Cabot Strait, which runs between Newfoundland and Cape Breton. Only after the advent of steamships did the Strait of Belle Isle, the shorter, but narrower, route north of Newfoundland become popular. In 1856, John Page, the Chief Engineer for the Department of Public Works for the Province of Canada, examined the southwest coast of Newfoundland between Cape Anguille and Port aux Basques to determine desirable lighthouse sites. He later recommended that in the event of two Light houses being built, one of them should either be on Duck Island, or Point Enragée, and the other on Cape Anguille. But if one is deemed sufficient to meet the wants of the navigation, in that case Cape Ray may be considered the preferable position.

In 1865, G. F. Baillairge, an engineer representing Canada, met in St. Johns with Robert Oke, the Inspector of Lighthouses for Newfoundland, to determine if the two parties could work together to erect a lighthouse on the southwest coast. Newfoundland preferred the light be placed at Channel Head at Port aux Basques, where a short tower would do and where it could be easily kept due to its proximity to the settlement. Canada preferred Duck Island, as it would be more useful to vessels approaching from the west. In a letter dated October 31, 1865, Newfoundland agreed that it would pay for half of the light if it were placed at Channel Head, but if it were placed on Duck Island, each province would pay an amount apportioned to the relative tonnage of vessels passing to and from Canadian ports and those frequenting Newfoundland ports.

This agreement may have fallen apart or perhaps the pending Confederation changed the equation. In the end, both of these locations received lighthouses, but the cost of construction was not shared. Cape Ray Lighthouse was completed by Canada in 1871, and Channel Head Lighthouse, built by Newfoundland, went into operation in 1875.

John Page provided the following description of Cape Ray in an 1860 report:

The extreme point of this cape, is about two-thirds of a mile wide in an east and west direction. It is flat and bare, with the exception of the S. W. side, and part of the middle, which are covered with dwarf spruce trees, closely matted together, seen from any point of view, the Cape in connection with the land lying to the northward, is very remarkable, near the shore, it is comparatively low, but about two miles inland, is a conical hill (called the sugar loaf) not less than 600 feet high, a little further to the north, is a mountain that rises still higher, which, on the N. E. side, appears to be almost perpendicular, and quite flat on top; between this mountain and the large Sugar loaf, are two other separate conical hills, of less height, which in clear weather, can be seen at a great distance.

The place selected and marked out as the most advantageous position for the erection of a Light Tower, is about the centre and highest part of the Cape, 85 feet over the level of the sea, and 1,000 feet north of water mark, and at the place referred to above, as covered with dwarf spruce.

Canada received a free grant of land from Newfoundland to erect a lighthouse on Cape Ray, but as the site was still part of the French Shore, Her Majestys Imperial Government also had to sanction the project. Work began in 1870, and by the end of that year, the tower was finished, ready to receive its lantern and lighting apparatus. The original lighthouse at Cape Ray was a hexagonal wooden tower, forty-one feet high, and its signature of a white flash every ten seconds was produced by a revolving catoptric apparatus made up of twelve lamps and reflectors. The total cost of the lighthouse, which went into operation on July 13, 1871, was $11,347.76, and Rober Rennie was hired as its first keeper at an annual salary of $600. A wooden keepers dwelling, also painted white, was located a short distance from the tower.

During 1873, a steam fog whistle was built at Cape Ray. This signal commenced operation on October 20th of that year, sounding a ten-second blast in each minute. Keeper Rennies salary was raised to $1,000, but he had to use the additional $400 to hire an engineer to operate the fog whistle. During a visit by Inspector Barbour in 1874, Keeper Rennie reported that two recent improvements to the lighthouse had proven successful. Wire stays attached to the tower now prevented it from being shaken by high winds, and ventilators added to the lantern room helped the lamps burn brighter.

When visiting the station in October 1876, Inspector Barbour inquired why the fog alarm was not sounding at 6 p.m. on June 13th of that year when the steamer Lake Megantic passed the point. The keeper responded that the fog alarm was in operation between 3 p.m. and 11 p.m. on that date, and he had heard the whistle of a steamer at that time but could not determine its whereabouts due to the fog. Upon further investigation, Inspector Barbour concluded that if a steamer were west of the cape with a west or southwest wind blowing, it would be nearly impossible for it to hear the fog whistle. To improve this situation, Barbour recommended that a new fog alarm be built at the tip of the cape, 550 yards from the current fog whistle.

Three men were landed at the cape on July 6, 1877, along with construction materials and a new, cheap and simple steam fog-horn invented by N. S. Woodward, of Sherbrooke, Quebec. Ten days later, the building was completed, and the new fog alarm was in operation. The inspector steamed out four-and-a-half miles from the station and had the new horn blow for thirty minutes followed by the old horn for an additional thirty minutes. Given its superior location, the new horn, though less powerful, was more audible than the old one. The original fog horn at Cape Ray was shipped to Point Amour, where it went into operation on August 8, 1878.

During 1877, John Nevill, Inspector of Lights for Newfoundland, visited Cape Ray and made the following report on its new Woodward fog alarm.

These new Alarms are comparatively of so small prime cost and are operated so economically that I hope (rather than expect) that they will prove effective. I cannot help thinking that the powers developed is inadequate for prominent stations, but I believe, supposing them to fail of attaining a first rank among Phonic Signals that there are many stations where they can be placed with good effect, as for instance, Cape Spear, the neighborhood of Powels Head, Trepassy, &c.

Nevills observations proved insightful. The alarm, which had been placed there conditionally, was at first deemed adequate, but in 1878, the following was noted by the inspector from Quebec: The fog-horn has not worked well for some time; at first when it was put up it sounded well, but at present it cannot be heard except at a short distance. The principle is not good, and I would recommend that a new one of a larger size be put there as soon as possible, of an approved description. Mariners were alerted that the Cape Ray fog alarm was unreliable, and later in 1878, the Woodward foghorn was removed and replaced by a Champion horn, which was reportedly heard at a distance of nine miles even with a strong crosswind.

In April of 1885, Cape Ray Lighthouse was destroyed by fire following the explosion of a lamp. The fire was fortunately confined to the lighthouse, and immediate steps were taken to erect a new tower. Materials were sent down from Quebec aboard the steamship Napoleon, and a new tower and light were placed in operation on August 6th of that same year. The tower was built by T. Routier at a cost of $1,990.50 and E. Chanteloup provided the lantern and apparatus for $2,837.51. The new tower was built of wood, but its shape was octagonal rather than hexagonal. The lights characteristic was changed from a flash every ten seconds to a flash every twenty seconds.

Newfoundlands Inspector Nevill used the destruction of the wooden tower at Cape Ray to promote his support of cast-iron towers. The wisdom of the course adopted here of using cast iron for Light towers has been illustrated by the destruction, by fire, of the wooden structure erected by the Dominion Government at Cape Ray. Wood is usually adopted because it is somewhat cheaper than iron; but one or two losses by fire would soon more than cover the difference of first cost for several stations. Further, iron is permanent, it may be said everlasting, and even requires less attention to painting than is required by perishable structures of wood.

In 1906, a new lantern room and a first-order, triple-flashing Fresnel lens, illuminated by an incandescent petroleum vapour lamp, were installed at Cape Ray, changing its signature to a group of three flashes every fifteen seconds. That same year, a new dwelling was built for the fog alarm engineer, and the steam fog horn was replaced by a diaphone fog alarm, housed in a new large structure located roughly 500 yards northwest of the previous fog alarm building.

The fog alarm's steam plant was replaced by an oil plant in 1921, and the following year the station received an electric lighting plant.

Given its strategic location overlooking Cabot Straight and its proximity to Cape Breton, Cape Ray was also home to a telegraph station and a Marconi wireless station. A telegraph cable connecting Cape Ray to Cape North was laid in 1856, and the Marconi station was established by 1906.

The elegant wooden lighthouse at Cape Ray was damaged by fire in 1958, and a temporary light on a pole was established until the current uninspiring concrete tower was completed in 1960. In 1998, a red stripe was painted on the tower as a daymark. A new assistant keepers dwelling was built at the station in 1955, and another dwelling was completed in 1961. The lighthouse was automated in 1991.

In 1966, one of the keepers discovered arrowheads near the station, and this location, formerly the home of Dorset Eskimos, is now a recognized archeological site.

The last remaining keepers dwelling at Cape Ray now serves as a gift shop and museum, run by the South West Coast Development Association. The small building next to the tower, which was declared a Recognized Federal Heritage Building in 2007, is an office for the lighthouse keepers.

For a larger map of Cape Ray Lighthouse, click the lighthouse in the above map.

From Highway 1, 9.3 km (5.8 miles) north of Port aux Basques, turn west and continue 5.2 km (3.2 miles) to the village of Cape Ray. From there, a road leads south a short distance to the lighthouse. A museum is housed in the remaining keeper's dwelling, and a gift shop is located in another structure nearby.