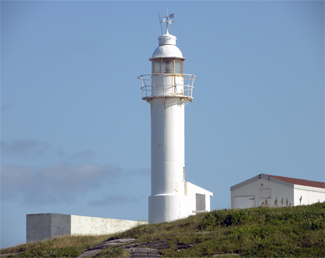 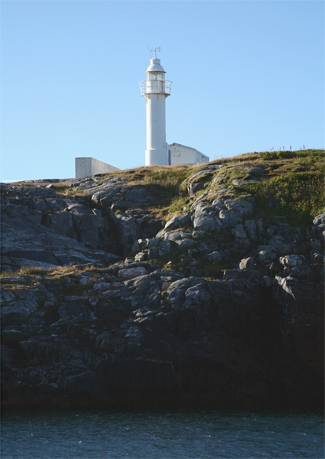 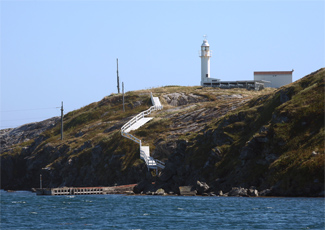 Port aux Basques is so named because Basque whalers used the port in the 1500s for shelter and fresh water. Located at the southwest tip of Newfoundland, Port aux Basques has naturally played a role in different attempts to link the island with the nearest landmass, Nova Scotias Cape Breton, located across Cabot Strait. In 1856, a telegraph cable was successfully laid between Cape Ray, near Port aux Basques, and Cape Breton. Ships could then toss messages overboard in watertight containers at Cape Race, Newfoundland, where they were retrieved and telegraphed to Cape Ray and then on to New York City, cutting the time for receiving messages from Europe by four days. In 1857, it was noted that Channel Head, the eastern tip of an island just off Port aux Basques, would be a good place for a Light-house, it would prevent many shipwrecks and Port au Basque, now the Telegraph is so near, is likely to be more visited by vessels. It would be several more years before a lighthouse was finally built at Channel Head, but vessels did indeed start visiting the port more frequently.

In a letter dated October 12, 1864, Captain Orlebar, who had been in charge of the Newfoundland Survey for the Royal Navy, reported on the need for a lighthouse on the southwest coast of Newfoundland.

I beg to say that a Lighthouse on the coast, somewhere between the Island of St. Pierre and Cape Ray, would be of great service to the trade of the British Provinces as well as to Newfoundland.

And I am of opinion that as a Light on Channel Head would be of eminent service to the thriving settlement of Channel, and point out to strangers the locality of the excellent little harbor of Port au Basque, I recommend, on these accounts, that the Light be located on Channel Head.

I further consider that the Light House should have but small elevation, as the land is 95 feet above high water, and the Light should be a fixed white light, and of second rate power.

The following year, Robert Oke, Inspector of Lighthouses for Newfoundland, and G. F. Baillairge, an engineer in the employ of the Canadian Government, visited the southwest coast to select a site for a lighthouse that would benefit both colonies. Oke preferred Channel Head as the site for a lighthouse, while Baillairge felt that Cape Ray would be the best site for Canadian interests if a single lighthouse was used or Cape Anguille and Pointe Enragee if two lighthouses were built.

The Government of Newfoundland offered to pay half of the construction and maintenance for a lighthouse on Channel Head if Canada would agree; otherwise, if the light was built at Point Enrage, Newfoundland wanted the cost to be apportioned according to the tonnage of vessels from each colony that would benefit from the light. Unable to reach an agreement, the Canadian Government, with help from the Imperial Government, built a lighthouse on Cape Ray in 1871, and Newfoundland was left to cover the cost of its light on Channel Head.

In 1873, a Mr. Winter presented a petition to the Newfoundland House of Assembly from M.H. Genge of Channel and Rev. T.A. Goode of Port aux Basques, with the backing of others from each place, praying for a lighthouse on Channel Head. The following year, work on a lighthouse was carried out and Austin Oke arrived on November 5 to fit up the lantern. The season, however, was too far advanced, and the light was not put into operation until the spring of 1875. The nine-metre-tall lighthouse was unique, consisting of a square wooden tower that rose from a slightly larger wooden base. A fixed red light was shown from the towers lantern room at a focal plane of 27.5 metres.

Timothy Pike was hired as the first keeper, but John Nevill, the lighthouse inspector, noted that the tower was in a place very difficult of access, rendering it undesirable that the light should be operated by a resident on the other side of the gut, which separated the island from the mainland. To obviate this issue, the construction of a small dwelling house adjoining the tower was recommended.

Inspector Nevill noted in 1876 that Keeper Pike was unable to access the lighthouse on at least one occasion, and as a result the light was not put in operation that night. This incident likely prompted the necessary funding, as the much-needed dwelling was erected the following year.

In 1879, Inspector Nevill recommended a brick cistern be built to collect rainwater on Channel Head, as the only water the keeper had was that which gathers on the surface and in the clefts of the rocks. It took some time, but the cistern was finally built in 1890.

Inspector Nevill noted in 1890 that the framework of the lighthouse was in bad condition and that it never was a satisfactory building, having been as it were extemporized locally. Nevill recommended that a small iron tower be erected on one side of the present tower, and then the old lighthouse could be demolished. This proposal also took a few years to happen, but in 1895, a circular iron tower, with a height of seventeen metres, was erected adjacent to the wooden tower and equipped with a fourth-order lens.

The Newfoundland Railway, which linked St. Johns and Port aux Basques, was completed in 1898, and at that time ferry service was initiated between Port aux Baques and North Sydney, Nova Scotia. To aid this service, a fog signal building was erected twenty metres south of the lighthouse. During thick or foggy weather, a four-ounce cartridge of gun cotton was exploded every eight minutes. A red brick magazine was erected nine metres northeast of the tower to house the explosives, and the dwelling, tower, and fog signal were all linked by covered passageways for the convenience of the keeper.

In addition to the new fog signal at Channel Head, range lights were established at Port aux Basques in 1898 to help guide the ferry into port. The front light was shown from a square pyramidal wooden tower on the southwest point of Road Island, and the rear light was shone from a similar structure, located 448 metres away on the mainland.

In 1906, a diaphone fog alarm, operated by compressed air, was established at Channel Head to replace the explosives, and a concrete breastwork was built seaward of the newly constructed engine house to protect it from being damaged by the sea. The diaphone trumpet, which projected from the south end of the engine house, would sound one 3 ½  second blast followed by 114 seconds of silence when needed.

Commercial electricity reached the station in 1963, and the light was converted from kerosene to electric in 1966. A two-storey duplex was built at Channel Head in 1965 along with various utility buildings, and later that decade a radio beacon was installed in the fog alarm building.

While the keepers duplex was removed in 1990, the station still has an active light and fog signal, and is seen by thousands of people each year from the decks of the Marine Atlantic Ferries. The tower was classified a Recognized Federal Heritage Building in 1988.

For a larger map of Channel Head Lighthouse, click the lighthouse in the above map.

Channel Head Lighthouse can be seen from the Marine Atlantic Ferry just offshore from Port aux Basques, or from Highway 1 just north of the ferry landing, you can exit and drive south to the waterfront in Port aux Basques, where it is also possible to view the lighthouse.