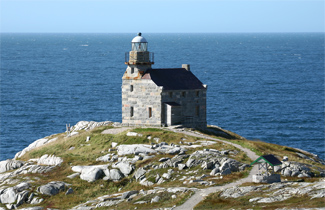 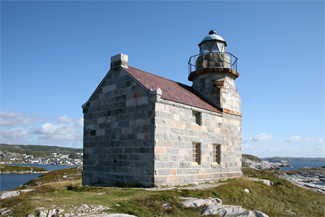 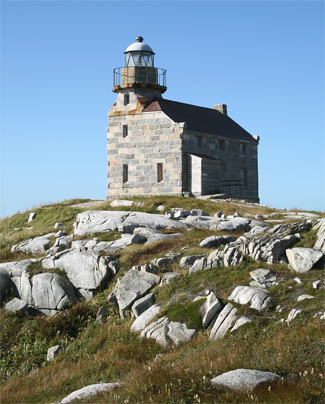 Rose Blanche in French means white rose, but the community's name is actually a corruption of roche blanche, white rock, for the beautiful white quartz outcroppings seen in the area. Fishing and mercantile interests were important industries at Rose Blanche in 1871, when P.H. Sorsoliel and other residents petitioned the Newfoundland House of Assembly for a lighthouse. The following year, Rose Blanche was one of six sites selected to receive a lighthouse. During the summer of 1873, Rose Blanche Lighthouse was constructed on the eastern head at the harbour entrance using granite quarried on the spot. Smith and Haw(e) were paid $7,066 as contractors for the lighthouse, and the total construction cost came to $8,304.62. The lighthouse consisted of a twelve-metre-tall tower that rose from one corner of a one-and-a-half-storey, rectangular keepers dwelling. The illuminating apparatus and lantern room were provided by noted lighthouse engineers David and Thomas Stevenson of Edinburgh, Scotland. (Thomas Stevensons son was Robert Louis Stephenson, author of Treasure Island.)

John A. Roberts, and Englishman, was appointed keeper of Rose Blanche Lighthouse, and he lit the light for the first time on January 1, 1874. A fourth-order dioptric lens was used to produce a fixed white light at a focal plane of twenty-nine metres. In 1875, the lighthouse inspector found that Keeper Roberts had made unauthorized alterations in the rooms of the house, by which the good order of the station had been injured. The keeper was ordered to replace the partitions as they had been previously or be dismissed. Roberts reversed his alterations and served as keeper for two decades.

In 1879, the inspector noted that the cooking stove in the kitchen made the whole granite house intolerably warm during the summer. A small outside kitchen, which could double as a porch in winter, was recommended, and it was added to the keepers dwelling the following year.

An accident occurred at Rose Blanche Lighthouse in the fall of 1889 that resulted in the lens being considerably damaged and Keeper Roberts' hands being badly burned. Roberts blamed the incident on bad oil, but a sample of oil was tested and found to be particularly good. The following year, a brick tank with an arched roof was constructed under the storehouse, and shoots were provided to conduct the rainfall from the roofs of the various buildings into it. In this manner, the station was provided with an adequate supply of water.

In 1890, complaints were received that the lighthouse blended with the surrounding granite from which it had been constructed. A Captain Maxwell suggested the structure be painted, and in 1891 the southern and eastern sides of the lighthouse were painted with red and white vertical stripes. A new lens was installed in 1906 to replace the old apparatus.

John Cook was appointed the second keeper of Rose Blanche Lighthouse in 1893, and he served until 1909, when his son, Bruce Cook, assumed responsibility for the light. Bruce married Minnie Barter-Pennell, a widow with three daughters, and the couple then had six more children. To accommodate his family of eleven, Keeper Cook built a wooden extension on the east side of the lighthouse. In 1924, Minnie's sister was left a widow and moved into the lighthouse with six of her eleven children, and eighteen people called the lighthouse home for the next six years. Bruce Cook was necessarily a man of many talents, serving at home and in the community as a mechanic, blacksmith, dentist, barber, and surgeon.

Rose Blanche Lighthouse was severely damaged by a particularly fierce storm in August 1939. By 1946 the dwelling was unstable, and it finally collapsed in a puff of dust in October of 1957. An open-frame tower was built adjacent to the old lighthouse in the 1940s and displayed an unwatched light. This wooden tower was replaced by a metal skeletal tower in the early 1960s, which served the point until the light was deactivated in the 1980s.

The community of Rose Blanche was an isolated outport until 1961, when a road from Port aux Basques was extended to it. Electricity arrived in 1965, and the population of Rose Blanche peaked in the 1970s after people from small outports relocated to Rose Blanche during the government's resettlement plan of the 1950s and 1960s. Since the collapse of the fishery in the 1990s, the population has been in sharp decline.

In 1988 Southwest Coast Development Association, while working on a regional tourism plan, identified Rose Blanche Lighthouse, then in near ruins, as a potential tourism attraction. A twelve-member steering committee was formed in 1991 made of six residents from Rose Blanche and six individuals from other nearby communities, and after taking a fact-finding trip to Prince Edward Island and educating themselves on community restoration efforts, they prepared a draft proposal for developing the area around the lighthouse, known locally as The Neck. The proposal, which called for an engineering feasibility study, was presented to the Southwest Coast Development Association (SWCDA), and in July 1992, the federal/provincial Cooperation agreement awarded $36,000 for a study.

Atlantic Engineering Consultants of Corner Brook was awarded a contract for the study in September 1992 and by the following spring had produced a two-inch-thick report to guide the development. Actual restoration work commenced in 1996, after Human Resources Development Canada contributed $634,000 and Strategic Regional Diversification Agreement chipped in $203,000.

Under the direction of a quarry master, twelve locals were given a sixteen-week training course in rock quarrying in the winter of 1997 and then during the following summer produced the needed granite blocks, weighing between 200 and 1,100 pounds. The first step in restoring the lighthouse was to dismantle the tower, which was the only part of the structure standing thanks to its stone staircase that was built into the walls. Blocks recycled from the ruins were used for 70% of the reconstruction, and the rest were taken from the original quarry site on the shoreline, roughly 200 metres east of the lighthouse. Reconstruction of the exterior of the lighthouse was completed during 1997, and the following year pink Trinity slate tiles recovered from the ruins and supplement by new ones were placed on the roof, and the interior work was undertaken. A wishing well and benches were built using some of the leftover granite.

After a decade-long, $1.5 million project, the lighthouse reopened in 1999. The interior of the lighthouse is furnished to represent life in the 1800s, and a sixth-order Fresnel lens, given to those who worked tirelessly to restore the lighthouse, is on display.

As the sun set on August 3rd, 2002, Rita Anderson of SWCDA flipped a switch to activate a flashing red light in Rose Blanches lantern room. It has been not only my job but a work of love to restore that lighthouse, Anderson said. Its active, its there now, its whole. You can look out now and see a light where there wasnt one for over 50 years. People of Rose Blanche see it standing there now instead of just in ruins. So its like new life has been brought back into her. On September 7th, 2002, the lighthouse became the first in Newfoundland to be recognized as a Registered Heritage Structure.

Just offshore from Rose Blanche Lighthouse is Cain's Island Light Station that is equipped with a fog signal and light. This station was established in 1904 as a fog alarm, and then a fixed red light was mounted atop the fog alarm building in 1907. This photograph shows the station in 1922, while this photograph was taken in 1990, just before the lighthouse shown therein was torn down and replaced by this skeletal tower.

For a larger map of Rose Blanche Lighthouse, click the lighthouse in the above map.

From Highway 1 in Port aux Basques, just north of the ferry landing, go east on Route 470 for 44 km (27.5 miles) to Rose Blanche, and then continue around the eastern side of the harbour where you will find a parking lot for the lighthouse. A short hike is required to reach the lighthouse. The lighthouse is open from 9 a.m. to 9 p.m. daily during the tourist season (typically mid-May through October). Call (709) 956-2052 for more information.