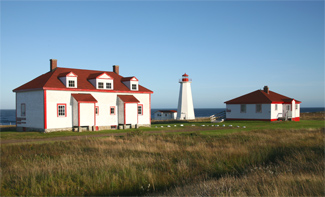 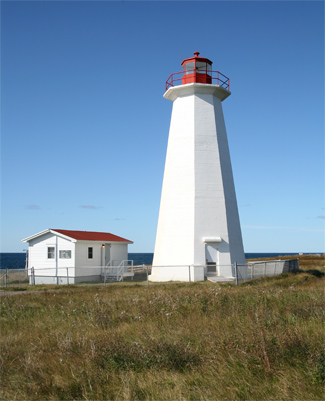 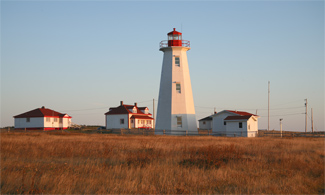 In 1860, John Page, Chief Engineer for the Department of Public Works of the Province of Canada, visited some twenty sites along the St. Lawrence River and in the Gulf of St. Lawrence and reported about their comparative advantages as locations for lighthouses. Some of these sites were in Newfoundland, outside the jurisdiction of the Province of Canada, but Page noted, It should also be kept in view that it is the interest of the Province, to aid and facilitate the navigation of both outlets from the St. Lawrence to the Ocean. For although Steamships generally pass through the Straits of Belle-Isle, and between Labrador and the Island of Anticosti, the greater number of sailing vessels use the channel lying South West of both Anticosti and Newfoundland. At that time, there was no lighthouse marking the southwest extremity of Newfoundland, and Page noted that a light there had always been regarded by mariners and others, more or less conversant with the navigation by that route, as one of the most important that could be established. Page inspected four points in southwest Newfoundland: Cape Anguille, Cape Ray, Point Enragée, and Duck Island, before concluding that if two lighthouses were to be built, they should be at Duck Island or Point Enragée and Cape Anguille, but if only one was deemed sufficient, it should be located at Cape Ray. Cape Ray was eventually selected, but a light was not established there until 1871, four years after confederation.

Cape Anguille, the most westerly point in Newfoundland, forms the southwest point of St. Georges Bay and is situated eighteen miles northeast of Cape Ray. Page had proposed that the light at Cape Anguille be constructed either at the extremity of the cape, on ground 250 feet above the sea, or atop a plateau, a few miles to the southeast, that was 25 feet above the water. Strictly, Page wrote, there would be little or no difference in the actual outlay required at either place, as the greater height of tower necessary on the less elevated ground, would, as regards expense, be fully counterbalanced by the cutting and formation of a road, as a means of access to, and around such buildings as might be erected on the higher ground.

After several decades, Cape Anguille was once again considered as a location for a lighthouse, and it was determined that a tall tower would be built at the lower of the two sites proposed by Page. By this time, major towers were being built of reinforced concrete, and it was decided that a flying buttress lighthouse, a design used in nine Canadian lighthouses completed between 1908 and 1912, would be erected at Cape Anguille.

Construction started on the fog alarm building and tower in 1906, and the following description of the work appeared in the 1907 Annual Report of the Department of Marine and Fisheries:

The fog alarm building and reinforced steel concrete tower, mentioned in last year's annual report as under construction, were practically completed during the present year. The tower is octagonal in plan, 10 feet in diameter, sup- ported with eight flying buttresses, and will be surmounted by a circular iron lantern. The height of the tower, from its base to the apex of the lantern is 105 feet. The fog alarm building is a wooden structure 54 x 32 feet, 15 feet high to the wall plate, and is built on solid concrete foundations. A 5-inch diaphone plant was furnished by the Canadian Fog Signal Company, of Toronto, for $5,600, and the machinery is now being installed. In addition to the above works a dwelling for the fog alarm engineer, a flag house, and an oil store were also erected the whole being done by day labour, under the supervision of the Quebec agency.

The tower and fog alarm building were completed and placed in operation in 1908, after the boiler for the fog alarm had been landed at the station the previous year. A revolving third-order Fresnel, manufactured in Paris, France by Barbier, Benard & Turenne, produced the following light characteristic every ten seconds: 0.525-second flash, 1.35-second eclipse, 0.525-second flash, 7.6-second eclipse. The illuminant for the l00,000 candlepower light was petroleum vapour burned under an incandescent mantle.

A double dwelling was built to house the families of the keeper and the fog alarm engineer. Each side of this duplex had a kitchen, pantry, dining room, and living room on the main floor, with three bedrooms located in the upper, half-storey. Alfred Patry, a bilingual resident of Quebec City, was appointed the first keeper in October of 1908. According to his son Laurier, who would later become keeper himself, the relationship between the two families occupying the double dwelling rapidly deteriorated after the station opened, and the engineer soon moved to nearby Codroy. Patry opened up doors between the two halves of the dwelling, and his family enjoyed the additional space for many years. By 1923, Alfred and his wife Catherine had fifteen children, so the extra space was much needed and appreciated.

Catherine Patry passed away in April 1943, and that year Alfred fell ill, leaving the care of the lighthouse to his son Laurier. Laurier was officially made head keeper of Cape Anguille Lighthouse in 1945, and his father passed away two years later.

Between 1958 and 1960, a new octagonal, reinforced concrete tower and a fog alarm building were built by R. G. McDougall Ltd. Of Sydney, and the 1908 lighthouse, which had started to deteriorate, was demolished. The new tower, which was designated a Recognized Federal Heritage Building in 2007, stands fifty-nine feet tall and displays a white flash every five seconds. In 1965 and 1968 new bungalows were built for the keepers. Laurier Patry vacated the old double dwelling in 1968 and moved his family into one of the new residences.

After keeping the light for forty years, Laurier retired on December 31, 1983, and Henry Reid, who had been serving as an assistant since 1959, was promoted to replace Laurier. Keeper Reid retired in 1991, and in early 1992 Leonard Patry, son of Laurier and head keeper of the Channel Head Lighthouse at Port aux Basques, was transferred to Cape Anguille to carry on the tradition of lightkeeping at Cape Anguille that his grandfather had started over eight years earlier. Though the station was de-staffed in June of 1992, it was later re-staffed, and Leonard was back at the station.

In 2009, the Coast Guard announced it would gradually remove personnel from the remaining fifty-one staffed lighthouses in Canada, twenty-three of which were in Newfoundland and Labrador. Due to pushback from maritime interests and concerned individuals, a Senate committee looked into the planned de-staffing and in 2010 visited several of the staffed lighthouses. The committee published their findings in December 2010, and the following March, Gail Shea, Minister of Fisheries and Oceans, announced the de-staffing had been cancelled.

A reporter contacted Leonard Patry when the announcement was made. I read the email this morning, Leonard told the reporter, And it looks so definite. But still, Ive worked with them for quite a few years and still in the back of my mind I wonder what time this is going to be back on again, eh? Because it did happen before  it was on, it was off, then it was on and off again Anyway, I dont know what its got to do with, maybe its got something to do with elections or something? Still, Leonard was pleased his job was secure for the present.

In 2002, the station, minus the tower and a small office adjacent to it, were turned over to the Southwest Coast Development Association. Two years later, Linkum Tours opened Cape Anguille Lighthouse Inn, a sister property to the lighthouse inn it operates on Quirpon Island. The duplex, which was declared a provincial Registered Heritage Structure in 2003 and is the only surviving original building at the station, is used to host guests along with a more modern dwelling.

For a larger map of Cape Anguille Lighthouse, click the lighthouse in the above map.

From Port aux Basques, drive north on Highway 1 for 23.6 km (37.8 miles) and then turn west onto Route 406 just south of Doyles. Follow Route 406 for 22.4 km (14 miles), and you will find Cape Anguille Lighthouse at the end of the road. The head keeper's dwelling and a second, smaller dwelling are operated as Cape Anguille Inn by Linkum Tours.