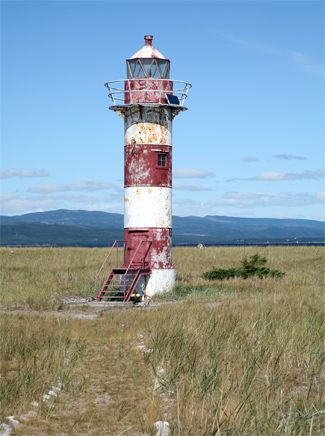 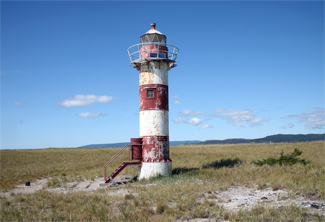 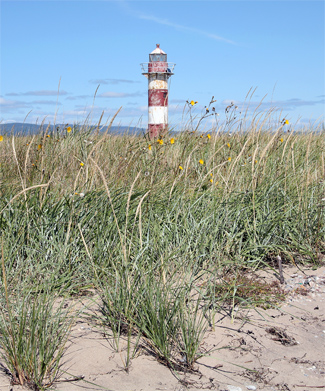 Sandy Point, also known as Harbour Point, was formerly the outer limits of a nearly thirteen-kilometre-long peninsula that extended out into St. Georges Bay from Flat Bay. In 1951, a vicious storm tore through the peninsula, creating The Gap, and Sandy Point is now part of Flat Island.

Mikmaq settlers arrived at Sandy Point from Nova Scotia in 1760, and roughly two decades later they were joined by Europeans. With the signing of the Treaty of Versailles in 1783, the French Shore was shifted to include the entire West Coast of Newfoundland, and Sandy Point became even more culturally diverse.

The population of Sandy Point peaked at around 750 in the 1850s. At that time, the settlement was the largest on the West Coast, and the shore along St. Georges Harbour at Sandy Point was home to numerous wharves and fish sheds.

In 1882, four small cast-iron towers were fabricated to serve as lighthouses, and one of these was designated for use at Sandy Point, where it would be serve as the first lighthouse on the West Coast. The tower was erected that year along with a dwelling, and the lighthouse was put into operation the following spring, after the first steamer of the year arrived from St. Johns with the illuminating apparatus. J. T. Nevill, Inspector of Lighthouses for Newfoundland, included the following statement regarding Sandy Point Lighthouse in his annual report for 1883: The establishment of this light is a source of great satisfaction to all concerned, and the light itself is well spoken of.

The circular iron tower was painted with three red and three white horizontal bands. The attached keepers dwelling was originally white, but a red band, inline with one on the tower, was later added to it. An Argand lamp was burned inside a sixth-order lens to produce a fixed white light with a focal plane of thirty-five feet.

The roof of the keepers dwelling was recovered with felt and gravel in 1886, and a picket fence was put up to hold the sand surrounding the tower in place, as the movement of the sand was endangering the towers foundation. In 1889, the inspector noted, If grass seeds were sown on the Point, it would preserve the sand from blowing away. Years ago it was all grass; but this was ploughed up, and the surface has been a shifting one ever since. For this seeding to be serviceable, it would be necessary to fence across the Point to keep out cattle and pigs - at any rate until after the seed had become thoroughly established.

C. Messervey was the first keeper of Sandy Point Lighthouse and served until 1893, when the inspector noted that since the sudden, accidental death of the keeper, the work of the station has been done by his son. This son was Mellidge (Millage) C. Messervey, and he served until at least 1912.

In 1931, the light was converted to acetylene gas, and its characteristic became white flashing. The light became battery operated in 1956, and at that time the keepers dwelling was no longer standing. Fred Messervey was caretaker for the light from 1939 to 1967, and after that he was hired on a contract basis to keep an eye on it.

Sandy Point was divided roughly in half between Catholics and Anglicans. Catholics lived on the west side, known as up along, and Anglicans on the east side, known as down along. After the railway arrived at St. Georges on the nearby mainland in 1898, the seat of the Catholic Church moved to St. Georges, and the Catholic school at Sandy Point closed. Residents were slowly relocating to the mainland, and after the storm in 1951 created The Gap in the peninsula and detached the community from the mainland, the migration increased.

The Anglican school closed down in the 1960s and Sandy Point lost its two last permanent residents in 1973. Besides the lighthouse, the only evidence remaining today that indicates people once lived on Sandy Point are concrete foundations, scattered pieces of iron, lumber and bricks, and three graveyards.

The iron lighthouse was restored in 1989, but in 2009, its paint was faded as can be seen in the photographs here, and the lantern room was a bit unstable. The Canadian Coast Guard restored the tower again in 2010, after which it looked to be in good condition. Although the tower is now locally and historically as Sandy Point Lighthouse, the Coast Guard now lists it as Harbour Point on its charts.

For a larger map of Harbour Point (Sandy Point) Lighthouse, click the lighthouse in the above map.

A distant view of the lighthouse is possible from the waterfront in St. George's, but you really should take a boat ride to the island for a closer view. Trips can be arranged through Appalachian Adventures.