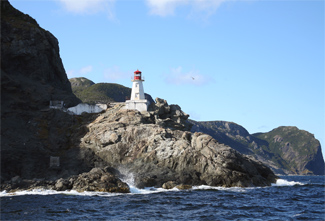 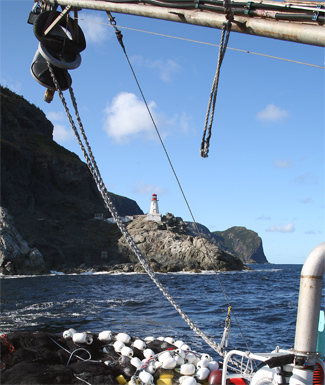 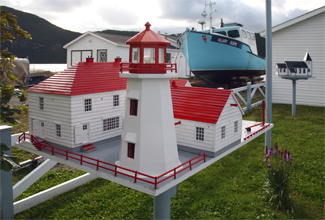 Bay of Islands is an extensive inlet on the west coast of Newfoundland and is so named for the numerous islands located near its entrance. Situated at the head of the inlet and at the mouth of the Humber River is Corner Brook, now the second largest city in Newfoundland and home to Corner Brook Pult & Paper Mill, a major employer for the region that was commenced operation in 1925. To help shipping reach the paper mill, a square wooden structure topped by an open wooden framework that supported an acetylene gas lantern was established on a stone cliff at South Head in 1925 at the southern entrance to the Bay of Islands. This tower was 6.1 metres (20 feet) tall while the light had a focal plane of 35.4 metres (116 feet). The tower was painted white, the lantern was painted red, and the characteristic of the light was fifteen white flashes per minute.

A fog alarm, housed in a one-storey structure, was also established in 1925 and sounded one 2.5-second blast in each minute. A one-storey dwelling was provided for the keeper. In July of 1928, the wife of the keeper at South Head drowned when the dory the couple was traveling in was upset.

Newfoundland became the tenth province in Canada in 1949, and over the next few years a comprehensive scheme for modernization in conformity with the higher standard in the rest of Canada was carried out in Newfoundland. As part of this modernization effort, a 10.7-metre concrete lighthouse, a double dwelling, and a storage building were constructed at South Head, and a new diaphone fog alarm was installed in the fog alarm building, which had been built in 1950.

Howard Sheppard began serving as a keeper at South Head Lighthouse in 1963. He and his wife Lorna lived at the station full-time until 1967, when the keepers began to serve one month at the station followed by one month off. At that time, Mrs. Sheppard moved with their three children to their present home in Lark Harbour. Keeper Sheppard worked at South Head Lighthouse until 1980, when the station was de-staffed and he was transferred to Devils Head, just south of the Bay of Islands. After thirteen years at Devils Head, and a total of thirty years of service, Keeper Sheppard retired in 1993.

The dwelling at South Head was intentionally burned in 1989, leaving just the octagonal concrete tower standing. Since retiring, Keeper Sheppard has occupied some of his time creating intricate models, two of which, the South Head Light Station and a church, are displayed alongside his driveway.

The follow report was written by a grandchild of Keeper Sheppard:

My grandfather, Howard Sheppard, was a lighthouse keeper at South Head for thirty years. South Head is located approximately 3 miles from Lark Harbour and the only way to it was by boat. The lighthouse station stood 120 feet above sea level. Windy days were considered normal on most lighthouse stations since they were exposed to headlands. Gale force winds were a fact of life for people who lived and worked in lighthouses.

My grandfather told me about one such night in 1973 that they had in which strong northwest winds, which happened to be the worst type of wind at the station. The winds continuously got worse throughout the day and into the night. The fishermans forecast at 5:30 p.m. that day said it was calling for 60-70 mile per hour winds with gusts up to 90 miles per hour, with temperatures dropping rapidly. He knew that with the wind picking up and the freezing temperatures that they were in for a very long night. By then, the other assistant lighthouse keeper had gone to bed since they worked shift work at the station. The assistant keeper was scheduled to start his shift at midnight but because of the poor weather conditions, my Pop had to awaken him at 11:00 p.m. since he could smell fumes from the coal furnace, which was used to heat the dwelling, since there was no electricity.

They soon discovered that the chimney was covered with ice, so they put ashes on the fire to put it out. It ended up being a very long and cool night with no heat to keep them warm. They had to keep opening and closing the outside door all night to keep it from freezing shut. It was too dangerous to go outside because of the strong winds and the force of the water being sprayed upon the light station. They were happy when daylight came and the winds started to slow down.

When they got outside they could not believe their eyes. There was 4-5 feet of ice covering the entire light station. Due to the strong winds that night, they were unable to communicate to Corner Brook on the VHF radio since the antenna had gotten torn off the building. They would normally make contact with Comer Brook 3 times per day. It took all day to repair the antenna so they could contact Corner Brook and inform them of the icing of the building. After several days when the weather improved, several men from Lark Harbour came to help them chop away all of the ice covering the entire station. It took a full week to remove all of the ice from the buildings. This was one of many such ice storms that occurred at South Head. The light station is now automated and the only thing left at South Head is the actual light.

The concrete octagonal tower was demolished in 2010 and replaced by a cylindrical, red and white striped, metal tower that supports a solar-powered light. In 1969, the keepers at the station began to report that the structures would vibrate during rough weather when waves would pound the caverns at the base of the cliff, and now there is some concern that the cliff is unstable.

The South Head Lighthouse Trail, which leads to a spot from where the lighthouse can be viewed, was completed in 2011. The lantern room from the octagonal tower is on display at the trailhead.

For a larger map of South Head Lighthouse, click the lighthouse in the above map.

From the Trans-Canada Highway in Corner Brook, take Route 450 west for 49.6 km (31 miles) to Lark Harbour and then turn left onto Little Port Road to reach Bottle Cove. In Bottle Cove, turn left and continue on a dirt road to reach the trail head for South Head Lighthouse Trail. The lantern room from the tower that was removed from South Head in 2010 can be seen at a parking lot on Beacon Road.

The lighthouse is owned by the Coast Guards. Grounds/tower closed.


If you are staying in the area, we highly recommend Captain Cook Bed & Breakfast and Cottages. The proprietors are knowledgeable about the region and can probably arrange a boat trip for you. We had the opportunity to go out with Captain Allan Sheppard, who had worked for a season at South Head Lighthouse and who called up Howard Sheppard, a former keeper at South Head Lighthouse, to join us. It was great to hear about life at this isolated station, and we also got the chance to jig for mackerel and see White Point Light. The scenery around the mouth of the Bay of Islands is spectacular, rivaling that in Gros Morn National Park just up the coast, and is certainly worth the drive out from Corner Brook.