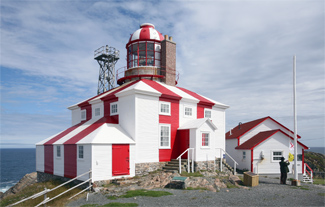 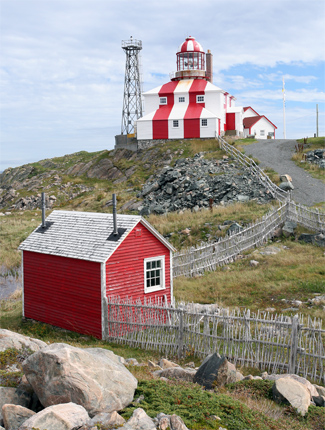 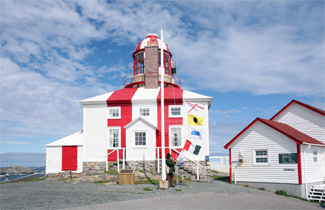 Upon sighting land after his 1497 transatlantic voyage aboard the Matthew, John Cabot, an Italian navigator and explorer, declared O Buona Vista!, and that is how North America was rediscovered and how Cape Bonavista received its name. Though the location of Cabots first sighting has been widely debated, a statue of the explorer was erected on Cape Bonavista in 1970 by Premier Smallwood.

First settled in the late sixteenth century, Bonavista, situated near the tip of the Bonavista Peninsula, was the most northern English settlement until the early eighteenth century and served as a centre for the northern fishery. By the 1840s, Bonavista had a population of 2,000, and the Commissioners of Lighthouses realized a lighthouse was needed near Cape Bonavista to guide vessels passing between Bonavista and Trinity Bays.

In April 1841, the Newfoundland government passed An Act to make provision for the establishment of a Light House on or near to Cape Bonavista, which authorized the treasurer to raise £1755 for defraying the cost of constructing the lighthouse. Ambrose Shea, the secretary to the Commissioners of Lighthouses, was dispatched to Cape Bonavista along with three other men to determine the best site for the lighthouse.

After tenders were called for, a £717 contract was awarded to John Saunders for constructing the lighthouse, based on a design from Trinity House in England. Cape Bonavista Lighthouse resembles those built earlier at Cape Spear and Harbour Grace Island and was nearly completed by the end of 1841. Upon the recommendation of Robert Stevenson and Son of Edinburgh, Scotland, a revolving red and white light, formerly use in the famous Bell Rock Lighthouse, was procured from Kerr and MacBride of Greenock for £800, less than one-third of its original cost.

The lighthouse, a nine-metre-square, two-storey frame dwelling, built around a central circular tower, was supposed to have commenced operation in June 1842, but at that time it was decided that a stone parapet was needed to support the lantern room instead of a wooden one, and cut stone was ordered from Halifax for this improvement. The stone arrived in St. Johns in early September, but foul weather prevented it from reaching Bonavista for several weeks. Patrick Kough, the surveyor for the lighthouse commissioners, left for Bonavista on November 1, accompanied by Jeremiah White, the recently appointed keeper for the lighthouse.

Upon arrival at the construction site, Kough found that the masonry work in the tower had not been well executed and would have to be taken down. Due to the lateness of the season and lack of supplies, completion of the lighthouse had to be postponed until spring. A brick flue was run up from the fireplace through the roof to allow the keeper to remain at the lighthouse as a deterrent to vandals, who has been breaking into and vandalizing the building. Keeper White was directed to keep the window shutters on the seaward side of the lighthouse closed and be careful to show no lights, lest his doing so should deceive any Craft that might be sailing in that direction.

In May of 1842, Kough along with Keeper Robert Oke of Harbour Grace Island Lighthouse who had been requested to superintend the erection of the lantern and apparatus sailed to Bonavista and oversaw the completion of the lighthouse. The Commissioners of Lighthouses visited the site in August, and the light was put in operation on September 11, 1842, after this date had been widely published.

Sixteen Argand lamps and reflectors were mounted on the lighting apparatus, which to alternately every two minutes a red and white light. The lighthouse itself echoed this red and white theme, being painted in vertical red and white stripes. Construction expenses for Cape Bonavista Lighthouse came to £3028, nearly double the estimated £1755, but the Commissioners of Lighthouse provided the following rationalization for the cost overrun:

The whole expense has certainly gone beyond what the Board contemplated; but when they consider the high character of the Light, and the superior construction and enduring nature of the Building, which will not need repairs within any reasonable period, they feel no hesitation in expressing the opinion, that the Colony has better value for its outlay on this, than on any of the other establishments in the Island.

Keeper Jeremiah White emigrated to Newfoundland from Ireland in his twenties, and was fifty-one when he was appointed first keeper of Cape Bonavista Lighthouse. Jeremiah and Mary, his wife, had four children, Nicholas, Matthew, Johanna and Thomas. Each of the three sons would later be in charge of the lighthouse for roughly a decade.

After the length of the interval between each flash of light was complained of for many years, the interval was reduced from two minutes to ninety seconds on October 1, 1860.

In 1883, kerosene-burning lamps were substituted for seal-oil lamps. Two years later, a two-storey, mansard-roofed dwelling was built adjacent to the lighthouse and connected to it by a covered passageway. This additional space was much appreciated by Keeper Matthew White and his younger brother, Thomas White, who was serving as assistant keeper.

Lighthouse inspector John Nevill, noted that in early 1888 Matthew on the ground of ill-health, applied for and obtained permission to abstain from duty for a time, hoping that rest would be restorative. It did not have the desired effect, and it became necessary, later in the season, to make new arrangements for the discharge of the duties of the station. This has been done by appointing the assistant keeper (Thomas) to the sole keepership, with a sufficient salary to pay him for providing all the help required. The invalided keeper, a faithful keeper for many years, has been provided with a retiring allowance. Thomas White passed away in 1895 and was replaced by his son Fred, whose term as keeper would extend the White familys length of service to seventy-five years.

In his annual report for 1889, Inspector Nevill recorded, The machine operating the light is getting very much worn, and cannot be relied on for any length of time. It has been in use since 1810, it having in that year been installed at Bell Rock. To solve this problem, the old lighting apparatus that had been removed from Harbour Grace Island and subsequently overhauled was installed at Cape Bonavista in 1895. This apparatus, which was originally used in Scotlands Isle of May Lighthouse, consisted of six Argand burners and reflectors and revolved to produce two white flashes followed by one red flash, with each flash attaining its greatest brilliancy every thirty seconds.

In 1913, a diaphone fog alarm was installed on Cape Island, located just off Cape Bonavista and connected to it by a rickety wooden footbridge. The fog signal gave three blasts every ninety seconds in this manner: 1.25-second-blast, 3 seconds silence, 1.25-second-blast, 3 seconds silence, 1.25-second-blast, 80.25 seconds silence. At the age of just eighteen, Hubert Abbott, a native of Bonavista, was hired to tend the foghorn. A powerful storm in 1919 generated towering waves that swept over the forty-five-metre-tall island, destroyed the dwelling, and damaged the fog alarm. Abbott and his family escaped with little more than their lives, and after this near disaster, the fog alarm was relocated to a position just south of the lighthouse.

Abott was placed in charge of both the light and fog alarm in 1923 and served for thirty-seven more years until retiring in 1960. The 1885 keepers dwelling was demolished in 1923 and replaced by a small bungalow. A second bungalow was constructed in the early 1960s, and by 1968 there were three dwellings at the station, besides the lighthouse.

In 1962, the historic revolving apparatus was replaced by an electric light, and four years later a skeletal tower was erected adjacent to the lighthouse to support an automated light. Ownership of the inactive Cape Bonavista Lighthouse was then transferred to the provincial government, and in 1970 it was declared a Provincial Historic Site. Starting in 1975, Willis Hicks and a crew of workers began a four-year restoration of the lighthouse. One of the trickiest parts of the project was determining the original layout of the rooms and what type of wall covering was first used. About ninety percent of the work was done by local labour, and most of the period furnishings, ranging from beds to top hats, were acquired in the Bonavista area. The lighting apparatus that had been installed in the lantern room in 1895 was returned to the lighthouse, and its gleaming reflectors are evidence of the care and work put into maintaining the lighthouse.

On August 3, 2001 a severe electrical storm struck Cape Bonavista. It was like a battlefield, recalled Don Johnson, who worked at the historic site. Lighting struck the cape repeatedly, including three hits to the lantern room, which ignited a fire. Staff quickly called the fire department, and the flames were extinguished before causing too much damage. Fortunately, the lighting apparatus was absent from the lantern room, which was being restored at the time.

A visit to Cape Bonavista Lighthouse is not to be missed. Guides in period costume lead visitors through the kitchen, living room, and various bedrooms and then up the steps of the tower where they can witness a rare site: a working set of lamps and reflectors that is slowly revolved by a clockwork mechanism.

For a larger map of Cape Bonavista Lighthouse, click the lighthouse in the above map.

The lighthouse is owned by the Newfoundland and Labrador Department of Tourism, Culture and Recreation. Ground open, tower open in season.