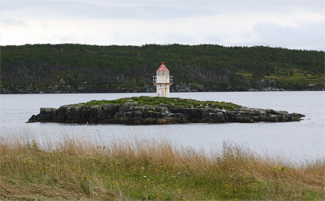 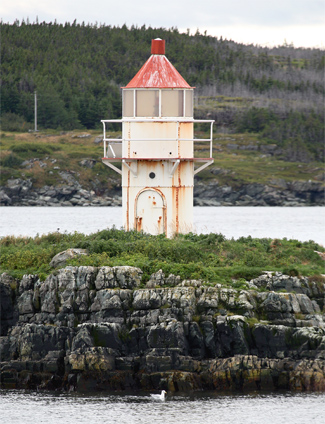 Jacques Cartiers record of his ten days spent in Catalina Harbour in 1534 makes it clear that the harbour had already received its current name by that time. Fishermen from England, France, and Spain frequented Catalina Harbour in the sixteenth century, and fishing remains the driver of the local economy.

Located on the eastern shore of the Bonavista Peninsula, just south of Bonavista, Catalina Harbour received some notoriety in 1877 when a gigantic squid washed ashore during a storm. Two of the specimens tentacles measured nine metres long, and its body was 2.7 by 1.8 metres. The squid was sent to St. Johns for display and was later purchased by the New York Aquarium, which used it to create a model squid for display at the American Museum of Natural History in New York.

Situated just inside Catalina Harbour is Manuel Island, whereon a cylindrical iron lighthouse was established in 1918. The towers lantern room was fitted with eight glazed panes and housed a sixth-order lens that beamed forth a red light at a focal plane of 6.2 metres.

In 1938, John Stickley was serving as keeper, and it was his duty to light the kerosene lamp each evening and extinguish it the following morning. The light was solarized and automated in 1960, and John Manuel, the keeper at the time, became the lights caretaker. Alexander Manuel succeeded him in this capacity in 1963.

For a larger map of Manuel Island Lighthouse, click the lighthouse in the above map.

Take Rout 230 to Catalina on Bonavista Peninsula, and then go east one block and follow Main Street, the road that parallels the shore, to the southeast side of the community. Manuel Island Lighthouse can be seen from the end of Main Street or from Sandy Point Road that branches off from Main Street near its eastern end.