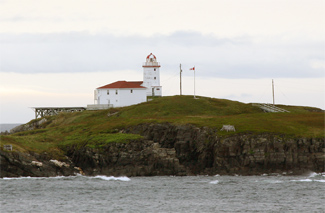 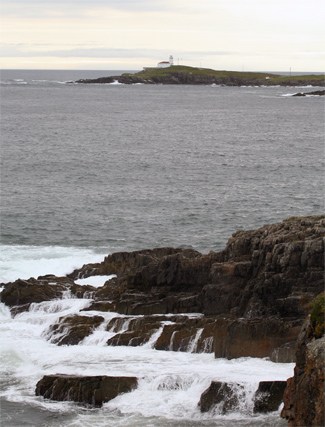 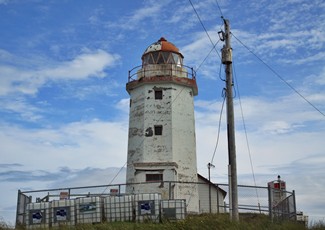 After traveling the coast of Newfoundland inspecting schools in 1844, John V. Nugent noted, The entrance of the harbor of Catalina, by day, is not difficult; but there are dangers here, nevertheless, which forbid the attempt to enter by night, particularly if it be dark. On this account, many vessels and boats are compelled to bear away to sea in the worst weather, that otherwise might enjoy the comfort of a safe asylum; and lives are endangered, and property risked, that I think a very moderate outlay would in future prevent. In 1855, roughly a decade later, a Mr. Winter presented a bill for the erection of a lighthouse on Green Island, at the entrance to Catalina Harbour, to the Newfoundland House of Assembly. When the Assembly met the following year, Robert Oke, Inspector of Lighthouses, presented a plan for the lighthouse and an estimate of its construction cost and projected annual maintenance expense. The Assembly then approved a sum not exceeding £1200 to be drawn from the Light Dues to fund the project. Alexander Smith was contracted to construct the lighthouse, and Blaine Johnston & Co. provided the lantern.

Construction materials were landed on Green Island on July 30, 1856, and complying with his contract, Smith finished and delivered up the lighthouse on November 5th. Due to inclement weather, Patrick Houlahan, the stations first keeper, was prevented from landing on Green Island until December 9th. These same conditions convinced Inspector Oke to postpone installing the lantern, which had arrived late, until the following spring. After the lantern was installed, the stations permanent light, a fixed white light exhibited at an elevation of twenty-eight metres above high water, was put in operation in June of 1857.

The original Green Island Lighthouse consisted of a central tower, built of stone, around which was constructed a one-and-a-half-storey frame dwelling for the keepers. The towers domed lantern room was painted in red and white vertical stripes and glazed with triangular glass panes, and a chimney protruded from each end of the dwellings pitched roof.

During the summer of 1858, Inspector Oke delivered two laborers to Green Island to sink a well and build a road from the lighthouse to the landing place. The following year, after complaints from the keeper about the quality of the well water, Inspector Oke recommended a 300-gallon, frost-proof tank be provided to store water supplied from the mainland. In 1875, gutters and downpipes were installed to catch the rainwater from the lighthouses roof and conduct it to the cistern, thus eliminating the annual expense of boating water to the island. The following year, decayed spots in the freestone drum beneath the lantern room were replaced with brickwork, and in 1880 the entire freestone drum was replaced with an iron one that provided access to a new gallery encircling the lantern room.

In 1882, a building was constructed on Green Island to house a Champion fog horn. After advertisements alerting mariners to this new aid were published, the fog alarm, which gave a five-second blast every forty seconds, commenced operation on March 1, 1883, and the former assistant keeper was promoted to engineer to look after the alarm. It was soon apparent that an additional water tank had to be constructed to supply the steam engine that powered the fog alarm. A shaft was also sunk so seawater could be used if the fresh water supply was exhausted.

The seal oil lamp used in the lantern room was removed in 1893 and replaced with a kerosene lamp. At that time, the inspector noted, The keepers dwelling internally is in a very dirty condition. The keeper (Peter Woods), now an old man, as he gets older is less and less attentive to cleanliness.

In 1905, there were eleven fog alarms maintained by the Newfoundland Government. Three, including the one at Green Island, were operated by steam, one was a fog bell, four were explosive signals, and three were modern diaphone alarms powered by oil engines. Inspector Richard White strongly advocated replacing the three steam fog signals with diaphones, as a total annual savings of at least $1,500 could be realized.

The longliner Bright Eye 2 ran aground on Green Island on May 22nd, 1954. The keepers managed to rescue three men from the vessel, but Leonard Little drowned.

In 1956, two, one-storey keepers dwellings were built on Green Island, and the old wooden dwelling surrounding the light tower was removed. Reinforced concrete was placed around the old stone tower to create the present octagonal tower, which is still topped by the original domed lantern room. Generators were installed on the island in 1967 to electrify the light. Two years later, the station was connected to commercial power, and the stations keepers were put on a four-person rotational shift.

In late December 1984, a reporter from the Ottawa Citizen telephoned the keepers on Green Island to see what their plans were for New Year's Eve. "We'll be doing what we're doing now, sitting at the table, looking at each other and drinking a bottle of beer because there's no work to be done," said Ambrose Price, head keeper at the station. Price had been at the station for the past eighteen years, and Murdock Stewart had been with him for the last nine. The temperature at the time of the call was minus fifteen, and a ninety kilometer-per-hour blizzard was blowing from the northwest.

After thirty years of service, Clayton Dyke retired as a keeper of Green Island Lighthouse at the age of seventy-nine in 2011, the same year that the Gail Sheas, Minister of Fisheries and Oceans, announced that plans to de-staff all lighthouses in Newfoundland had been cancelled. Dyke believes that having keepers at the lighthouses likely saves a life or two. He recalls one example from his own service.

Me and another light keeper was out there  and we looked outside just about dark one night when a dragger was heading for the island. So when we saw her close to the island we knew she wasnt in the run, so we runned out on the front of the island there and the other light keeper started waving a flashlight and I runned in and started blowing the horn, so she made the turn.  I dont know if they had her on automatic pilot or no but, if we never done that she would have come up right the front of the island, and gone ashore.

Green Island Lighthouse is one of twenty-three stations in Newfoundland and Labrador that is still staffed. The tower was classified a Recognized Federal Heritage Building in 1990.

For a larger map of Green Island (Catalina) Lighthouse, click the lighthouse in the above map.

Follow Route 230 to Catalina on the Bonavista Peninsula. Once in Catalina, take Main Street, the road that wraps around the harbour, to the eastern side of the town, and then turn left at a convenience store onto Seaview Drive and continue to its end, where you will get a distant view of Green Island Lighthouse. You can also get a distant view from Murphy's Cove Trail in Port Union.