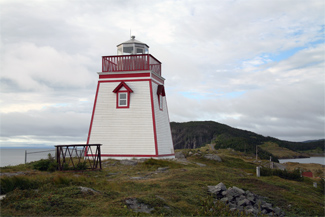 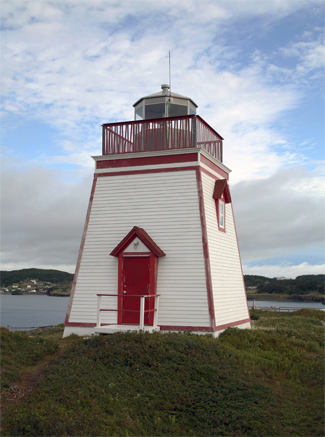 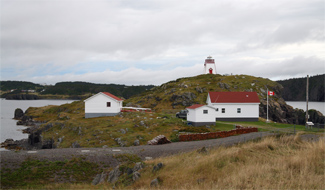 Trinity was extolled by Sir Richard Whitbourne in 1620 as having the best and largest Harbour in all the land. Whitbourne had visited the place in 1579 and may be responsible for the name Trinity, as he described the harbour as having three arms or Rivers, long and large enough for several hundred sail of ships. This commodious and defensible harbour made Trinity a significant fishing centre during the eighteenth and nineteenth centuries. Though the town suffered from the decline of the fishery, its cultural and architectural heritage has been painstakingly preserved, making it arguably the most notable heritage community in Newfoundland. As part of the New Founde Lande Trinity Pageant held each summer in Trinity, actors from the Rising Tide Theatre wander from one historic site to another, telling a story as they go. The theatre isnt alone in capitalizing on the towns historic character and spectacular setting  the movie The Shipping News, starring Kevin Spacey and Dame Judy Dench, was filmed in Trinity in 2001.

As Trinity grew in importance, a battery was built in 1744 at Fort Point, the tip of a peninsula that protects Trinitys harbour. By 1800, Trinity harbour had 826 residents, many of whom were tradesmen employed by the large fishery supply companies based there.

Work on constructing a lighthouse on Fort Point to mark the entrance to Trinity Harbour began in 1872, when the Scottish Firm of D. & T. Stevenson received $653 for a lighting apparatus and G. H. Cole was paid $158 for a wharf and road to provide access to the site. During 1873, $2,345 was expended on the project, and the following notice was published for mariners announcing the completion of the lighthouse.

On and after 1st January, 1874, a fixed white Light will be exhibited nightly from sunset to sunrise at this place upon a wooden tower painted white, and at a height of 75 feet above the level of the sea, and it should be visible in clear weather for eleven miles. The erection is situated in 48° 21 55 North Latitude, and 53° 26 54 West Longitude. The apparatus is dioptric of the 8th order, with a single argand burner, and illuminating an arc of the horizon of 320°. In entering the harbour the Light must be kept on the port hand.

William Harve was paid $16 on January 3, 1874 for having instructed William Rowe, Fort Point Lights first keeper, in his duties. William Rowe was the first of a lengthy string of Rowe family members that cared for Fort Point Lighthouse during most of the time it was staffed.

Lighthouse Inspector John T. Nevill noted in 1877 that the lens at Fort Point had been damaged when the lamps glass chimney exploded. Every one knows that a lamp glass, on a carefully trimmed and regulated lamp may break at any time from unascertained causes, Nevill wrote. This occurring in an unwatched light room, may readily cause injury to closely adjoining lenses, particularly when so small as the eighth order. No blame was placed on Keeper Rowe for according to the inspector his pay was not sufficient for nor did his instructions require a continuous nightly watch. The following year, Inspector Nevill approached the station at night and observed that the light from the new lens, supplied to take the place of the one broken in the lamp accident, could be seen from a distance of fifteen miles.

In 1882, Keeper Rowe complained that the square wooden tower shook considerably during storms. Many bolts in the tower had come loose due to shrinkage of the timbers, and the keeper was told to have all the bolts in the frame screwed up. Inspector Nevill noted that Keeper Rowe was willing to remain at the station all night for an addition of $20 a year to his small salary.

When Inspector Nevill visited Fort Point in 1884, he found the station in its usual scrupulously clean condition. Several months later, while making his annual report, Nevill noted that Keeper Rowe, hale and hearty, though past the allotted span, at the time of the inspection had since died. James Rowe took over as keeper in place of his father and received a small increase in salary for more constant attendance than has heretofore been expected of the keeper. Inspector Nevill noted in 1889 that James Rowe could certainly claim the distinction of having the best-kept station in the whole service.

In 1908, the characteristic of the light was changed from fixed white to an occulting white light, showing alternate periods of 6.25 seconds of light and 1.25 seconds of darkness, but a bigger change came to the station when a fog alarm building was added in 1910. This flat-roofed structure was located south of the lighthouse, at a lower elevation, and had a small store on its northern side. The diaphone fog alarm, sounded by air compressed by oil engines, gave blasts during thick or foggy weather in the following manner: three-second blast, ten seconds of silence, three-second blast, ninety-four seconds silence.

In 1921, the wooden Fort Point Lighthouse was replaced by a circular iron tower that was about half as tall. The gambrel-roofed structure atop which the wooden tower was mounted was retained and connected to the iron tower by a covered passageway.

Early on the morning of November 27, 1938, the schooner Marion Rogers left St. Johns bound for her homeport of Trinity with a crew of six, one passenger, and a load of goods. After passing Baccalieu Island around 6 p.m., Captain William Hogarth entered Trinity Bay, the final leg of the journey. As the Marion Rogers approached Trinity, a blinding snow squall struck. It was only the next morning when a suitcase was discovered on shore that the inhabitants of Trinity learned the Marion Rogers had run aground just a few metres from the fog alarm building on Fort Point. The seven men aboard all perished, and due to the stormy weather, it took several days to recover the bodies (one body was never found).

A magisterial enquiry investigated the cause of the shipwreck, but as there were no survivors, much uncertainty about the incident remains. Arthur Squarey, the District Magistrate conducting the enquiry, provided the following summary of his findings.

After having heard the evidence of Henry James Rowe, Keeper of the Light & Fog Alarm at Fort Point, and William Arthur Rowe, Assistant Keeper, I have come to the conclusion they were hostile witnesses, that their evidence was contradictory and confusing, and in most cases avoided the issue, by forgetting and not remembering what happened at certain times

According to their evidence and in my opinion the duties of both the Keeper and the Assistant Keeper have been performed in a slip shod manner and in a good many cases the alarm has been taking care of itself, they seem to have no sense of responsibility, or what their watchfulness means to those who down to the sea in ships. I think its about time these people and all those who have similar position, are given to understand what their duties really are, and that it amounts to far more than receiving a cheque at the end of the month. In this case on the night of Nov 27th a gale of wind and snow storm was raging, the Keeper must have spent over one third of his watch away from the fog alarm and during his absence anything is likely to go wrong with the machinery

In conclusion I must admit that I cannot understand how a man (Captain Hogarth) with seafaring knowledge, even if he knew his position a short time previous to the accident, should continue to run on the land in such a gale when he could not hear the alarm, and knew that he was getting in close touch with the land. In my opinion I would call it bad seamanship.

T. S. Devine, Superintendent of Lighthouses, concluded that Keeper Henry James Rowe had placed the fog alarm in operation when necessary, however, he recommended that the keeper and assistant be disciplined for leaving the fog alarm unattended while it was in operation.

Keeper Henry James Rowe retired at the age of sixty-five in 1962, ending eighty-eight unbroken years of lightkeeping at Fort Point by the Rowe family.

After being condemned, the short, iron tower atop Fort Point was demolished on June 25, 1971. In its place, a red skeleton tower with a height of 4.3 metres was erected. The signature of this light, and the current tower that was built around 2003, is a white flash every five seconds. Visitors to Fort Point today will find several cannons on the grounds as a reminder of the points early history.

In 2011, the Trinity Historical Society announced plans to convert one of the two keepers homes on Fort Point into a interpretation centre. The completion of this project is timed to coincide with the 250th anniversary of the invasion of Trinity by the French in 1762. As Fort Point Lighthouse is still a staffed station, the second keeper's building is still occupied by the Canadian Coast Guard.

For a larger map of Fort Point (Admirals Point) Lighthouse, click the lighthouse in the above map.

Take Route 230 to the town of Lockston on the Bonavista Peninsula, and then turn south onto Route 239. After 6.0 km (3.8 miles) turn left in the town of Dunfield and follow the road, which will become dirt, 4.4 km (2.8 miles) to its end at Fort Point Lighthouse.