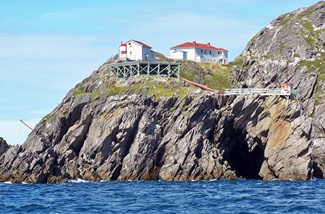 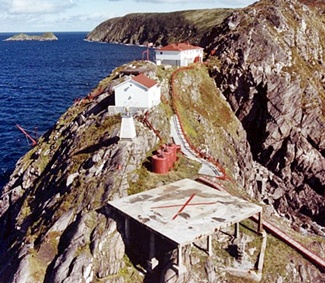 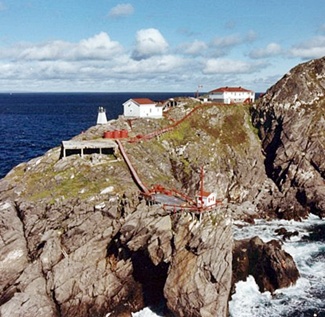 Situated roughly two miles off the tip of the Bay de Verde Peninsula, Baccalieu Island is the largest protected seabird island in Newfoundland. The island is home to more types of breeding seabirds than any other seabird colony in the province, with an amazing 3,360,000 pairs of Leachs storm petrels and 75,000 pairs of puffins. In 1964, it was noted that although the island had a light and fog alarm, during foggy weather the cries of the birds themselves served as an aid to navigation.

The name Baccalieu is derived from either the Spanish word bacalao or the Basque term baccalos, both meaning codfish. The whole of Newfoundland was reportedly once known as Baccalieu. This was an appropriate name as it was the cod fishery that attracted throngs of fishermen to the islands shores and supported Newfoundlands economy for several generations.

The need for a light on Baccalieu Island was noted by Newfoundlands Commissioners of Lighthouses in 1840.

The attention of the Commissioners was  attracted to the Island of Baccaloo, which appears to them to be a position where the establishment of a Light would be attended with the most material benefit to a large portion of the Trade of the Country.

This island, from its Geographical situation, commands the extensive Bays of Trinity and Conception; the former of which, though having an extensive trade and contributing to the general Light fund, does not at present enjoy any of the advantages arising from the operation of the [Lighthouse] Act; the erection of a Light on Baccaloo would do, in full, to meet this desideratum and its beneficial effects in reference to the Sealing Trade of the Island generally, must be manifest from the fact that this is the point whence the St. John's and Conception Bay Vessels, (the great majority) usually take a departure, and is also the land they desire to make on their return voyages; and in this latter view particularly would the more Northern Vessels be more or less participators in the convenience and security the Light would unquestionably afford.

As funds were limited and other lighthouse sites were deemed more important, an act that permitted a portion of the collected light dues to be used for the erection of a lighthouse on Baccalieu Island was not passed until 1857. In June of that year, Inspector Robert Oke visited the island to indicate the selected site for the lighthouse to Messrs. Haw and Saunders, whose tender for the project had recently been accepted. Shortly after this trip, Mr. Saunders died, and after notices for tenders were reissued, the contract was eventually awarded to John T. Nevill.

Due to the change in contractors, work on the tower and dwelling did not start until the last week of July 1858. The lantern room and lighting apparatus were provided by noted lighthouse engineers David and Thomas Stevenson of Edinburgh, Scotland. This equipment arrived in St. Johns on October 16, and three days later was shipped to Baccalieu Island aboard the steam tug Blue Jacket. The revolving lighting apparatus consisted of nine lamps, reflectors, and lenses, arranged in such a manner that every point of the horizon would be illuminated by a trio of lamps every twenty seconds. This was the first use of a catadioptric holophote apparatus, where the light that projected from the back of the lamp was returned to the front by a spherical mirror, and the light from the front of the lamp was parallelized by a glass holophote or lens. The striking lantern room provided by the Stevensons contained two rows of triangular glass panes.

The light on the northern end of the island was exhibited for a few hours on November 10, 1858, but was not officially placed in operation until December 20, 1858. The circular red brick tower stood just twenty-five-feet tall, but its lofty perch resulted in the light having a focal plane of 443 feet. In clear weather, the stations flashing light could be seen by the keepers at Cape Spear, over forty miles away. A square, two-storey keepers dwelling was attached to the tower by a covered way and painted white with a red roof. James Ryan was appointed first keeper of Baccalieu Island Lighthouse, and four generations of the Ryan family would watch over the light for the next ninety-plus years. When the Ryans left in 1950 for Toronto, the following was written about them in the St. John's Telegram.

They were well and favourably known by all mariners and fishermen in the sea lanes, they were the friends of all who needed them and were ready at all times to risk their lives to save others. Because of their isolation they loved not man less, but nature more, they always felt close to God and they were God fearing people.

During an inspection in September 1863, Robert Oke found the lantern room and lighting apparatus in a state that was not creditable to its keepers. Oke reprimanded the keepers and informed them that such inattention in the future would not be tolerated. In 1867, Captain Kerr of the surveying steamer Gulnare complained that during a night in September the light on Baccalieu Island had appeared as a fixed light for some time. This complaint prompted Inspector Oke to visit the station, where he was unable to find mention of any such occurrence in the stations logbook. An explanation offered by the keeper was deemed unsatisfactory by Inspector Oke.

The harsh marine environment quickly took its toll on the towers exposed freestone and brickwork. As a result, the tower was coated in cement in 1859, but this protective coating itself required frequent repair. In 1884, Inspector John T. Nevill noted:

The brick and free stone work of the tower continue to perish, with the result of causing the outside coating of cement to fall off the brickwork in large patches. The free stone is so very rotten that cement will not adhere to it to enable proper repairs to be made. As a palliative measure, orders were given to soak it with warm linseed oil. The brickwork has been repaired as far as defects showed themselves, but there cannot be the slightest doubt that the present winter will cause further damage. The time will soon be at hand when some thorough measure of restoration will have to be undertaken.

A more permanent covering for the lighthouse, in the form of iron boiler plates, was applied to the brick tower in 1893, to provide complete relief from the trouble and anxiety caused by the brickwork. Rotting wooden beams, used to support the lantern room, were replaced with iron ones in 1880.

In 1881, the assistant keeper left the station after finding a substitute to perform his duties. Inspector Nevill judged this act as so gross a want of discipline that it required immediate action. A new assistant was thus quickly appointed and sent to the station. This assistant apparently had a substantial family as the following year he complained that the single dwelling was too small for two large families. The overcrowding was solved in 1882, when a spacious, two-storey structure was added to one side of the dwelling.

As the top of Baccalieu Island was occasionally shrouded in fog, work began on a fog alarm station on the islands southwest tip in 1905. This stations building consisted of a fog alarm building, a keepers dwelling, and a storehouse, all flat-roofed structures painted in black and white vertical stripes. The diaphone fog alarm commenced operation in August 1906, sounding a five-second blast in each minute during periods of thick or foggy weather. In 1953, a light mounted atop a wooden, pyramidal tower was added to the southwest station.

There were plans to demolish the 1858 lighthouse but residents of Bay de Verde wrote a protest letter. Demolishing the stone lighthouse would be destroying a part of our culture, that could never be replace, they reasoned. It would be tantamount to blowing up a medieval castle in Europe, an act so outrageous that it would immediately have word wide attention.

Today, a white flash every six seconds is shown from a square skeletal tower located near the original lighthouse. The southwest station was de-staffed in 2002, but it still displays a white flash every ten seconds and, when necessary, sounds a four-second blast each minute.

For a larger map of Baccalieu Island Southwest Point Lighthouse, click the lighthouse in the above map.

Landing on the island, which is part of Baccalieu Island Ecological Reserve is possible at Ned Walsh's Cove and London Cove, but access to the seabird nesting areas of the island is not allowed from April 1 to October 30.