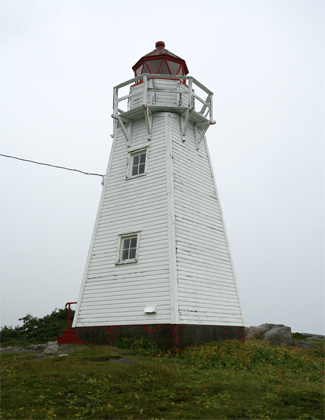 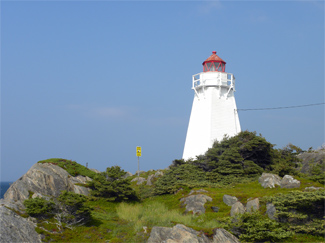 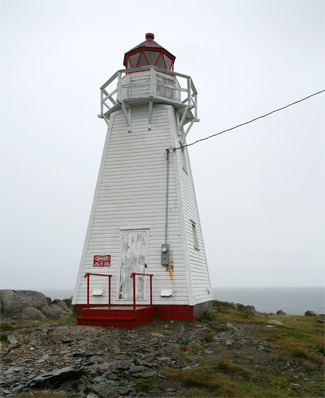 Hants Harbour is situated on the western side of the Bay de Verde Peninsula that divides Trinity Bay and Conception Bay. Its horseshoe-shaped harbour is bounded by Grassy Island on the west and Custards Head on the east.

The Newfoundland House of Assembly received a petition from inhabitants of Trinity Bay in 1880 calling for a lighthouse at Hants Harbour, and the following year a wooden octagonal tower attached to a one-storey store with a pitched roof was built on Custards Head. An Argand lamp was used in an eighth-order lens to produce a fixed white light at a focal plane of 19.8 metres. The lantern room was glazed with triangular panes, and the tower and store were painted white.

The first keeper of the lighthouse was W. Soper, and he was still in charge in 1885, when complaints were made that the light makes but a very indifferent appearance during the earlier hours of the night, but improving as time passed. Keeper Soper was contacted regarding the matter, and though his reply was defensive, it was judged an admission of the correctness of the charges. The inspector warned Soper to be more careful in the future, and he apparently was, as the report for 1889 listed the station as being in good order and well cared for.

In 1893 a sixth-order lens was installed in the lantern room in place of the original eighth-order lens, and the improvement was much appreciated in the locality. Starting in 1914, the tower was listed in the annual Light List as being square instead of octagonal, but the focal plane remained 19.8 metres.

The fuel for the light was changed from kerosene to acetylene gas in 1931, and its characteristic was altered from fixed white to flashing white. The present square, pyramidal lighthouse was built in 1957 according to the Canadian Coast Guard. The tower stands nine metres tall, and the focal plane remains 19.8 metres, as it always has been. The lantern room with its triangular panes appears to be the original from 1881.

Commercial electricity was strung to the lighthouse in 1968, and B. Ash was awarded a contract to service the light. Realizing the tourism potential of the site, Lower Trinity South Development Association has created a picnic site near the lighthouse.

For a larger map of Hants Harbour Lighthouse, click the lighthouse in the above map.

Follow Route 80 north up the western side of the Bay de Verde Peninsula to the town of Hant's Harbour. From Route 80, take one of the few roads that lead to the town. When you reach the harbour, follow the road that goes around the east side of the harbour until it ends near two houses. There doesn't appear to be any formal parking for this trail, so we just parked alongside the road. The short trail to the lighthouse goes up and over the headland at the end of the road, and there seems to be a grassy right-of-way between the two houses that leads to the trail.