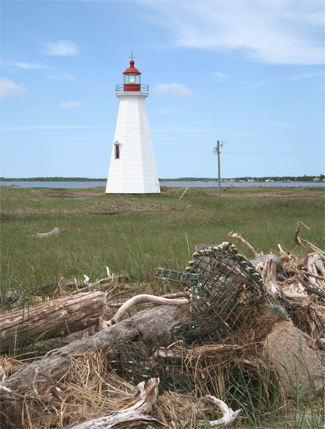 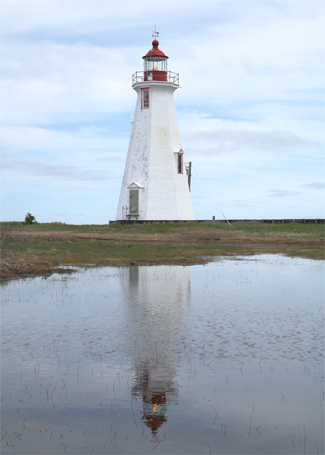 In the parlance of the 1800s and early 1900s, gullies were narrow openings between barrier islands or between points of land, and were thus often places needing navigational aids so mariners could pass through them to reach safe harbour. Speaking of locations in New Brunswick that needed lighthouses, John Harding, agent of the Department of Marine at Saint John, wrote the following in his 1871 report.

There are other positions which it is to be hoped will not be long without such a requisite protection to life and property, and the trade of which sections of our Province is of such magnitude as to require all the guides and safeguards that can be furnished. Among these I may be permitted to name that of the Gully at the Southern entrance to Shippegan Harbor, respecting which you directed me to make enquiries. The importance of this channel to the large class of hardy fishermen who follow this branch of industry and use that channel so largely in going to and from the fishing grounds, can scarcely be overrated. As the water is not deep, great care must be employed in making the harbor, especially in a storm, even during daylight.

Some years ago I was called upon as the Coroner of that district to hold an inquest on the bodies of three brothers, who in attempting to enter this Gully in a Southern storm, from the want of a proper land mark to guide them safely into the harbor, touched on one side of the channel, and their boat was upset. The three found a watery grave. A Lighthouse erected on the inside island would be a guide by day as well as by night, and would without doubt, stimulate the trade of that important district, while furnishing at the same time a means of protecting life.

The following year a square wooden tower, twenty-feet tall and topped by a wooden lantern, was constructed and equipped with four flat-wick lamps and sixteen-inch reflectors to guide fishermen through Big Shippegan Gully. Keeper Francis Dumaresque, who was paid an annual salary of $240, exhibited the light for the first time on October 21, 1872.

During an inspection visit in 1875, Keeper Dumaresque, who had previously been described as a very obliging and efficient officer, was absent from the station, having left the light in charge of another man so he could look after his crops. The lighthouse was not in as good of condition as in previous years, and a letter was sent to the keeper chiding him for his neglect and advising him to personally supervise the light. Keeper Dumaresque was again absent from the station during the inspection visit of 1876, having left to visit his wife who was very sick. The lighthouse was found in very bad order, the plaster in the building broken very much, and the building generally very untidy. During the inspection visit in July of 1877, Keeper Dumaresque was at the station. Everything was found to be neat and in good order, a condition at least partly attributed to the recovery of the keepers wife.

A breakwater was built around the station in 1875 to prevent the sea from undermining the lighthouse. This measure proved effective until a heavy storm in October of 1879 damaged the towers foundation. The tower was relocated the following year from its original home on an island called LIslet to Alexander Point, on the northeast side of the entrance to the gully. Michael Hayden moved the tower for $288. A lantern hoisted on a pole was used 484 feet east of the tower in its new location to provide range lights to indicate the proper course through the gully.

A keepers dwelling was built in 1883, and in 1897, using material provided by the Department of Marine, Keeper Dumaresque enlarged the dwelling with an addition measuring seventeen by twelve feet. Keeper Dumaresque served at Big Shippegan until 1902. His career at the light thus spanned an amazing thirty-one years.

The front range light that operated in conjunction with Big Shippegan Lighthouse was discontinued in 1888, and the following year range lights were established at Indian Point on the south side of Big Shippegan Gully. These two lights in one indicated the deepest water over the bar and helped guide vessels to Big Shippegan by the gully.

In 1905, a new, much taller lighthouse was constructed 300 feet south of the old tower by Honore Duguay of Caraquet under a $1,500 contract. The new Big Shippegan Lighthouse was an octagonal tower, with sloping sides, surmounted by an octagonal lantern. The tower measured fifty-one feet from its base to the top of the ventilator on its red lantern and was situated on a square wooden cribwork that had a height of six feet.

The new lighthouse commenced operation at the opening of navigation in 1906, displaying a fixed white light that was visible for twelve miles. In 1907, the fourth-order lens originally installed in the tower was replaced with a single-flashing third-order lens. The tower was altered at a cost of $315 to receive the revolving light.

A new keepers dwelling was built at the station in 1924 by P.G. Robichaud, and the foundation crib was repaired. This picture, taken in 1944, shows Big Shippegan with the gully range lights that had been moved from the southern side of the gully to the northern side by this time.

Big Shippegan Lighthouse is one of nine octagonal wooden towers remaining in New Brunswick. Although the tower's third-order Fresnel lens is long gone, it still supports a beautiful Barbier, Benard et Turenne lantern, the only one of its kind remaining in the province.

For a larger map of Big Shippegan Lighthouse, click the lighthouse in the above map.

From Shippagan continue north on Route 113 across the causeway to Lameque Island then take your first right on Chemin Chiasson. After 4.6 km (2.9 miles), turn right just past the Village of Chiasson onto Allee Domitein. This dirt road becomes quite rough after 0.8 km (0.5 miles), so parking at this point and walking the last 0.9 km (0.6 miles) to the lighthouse is recommended.