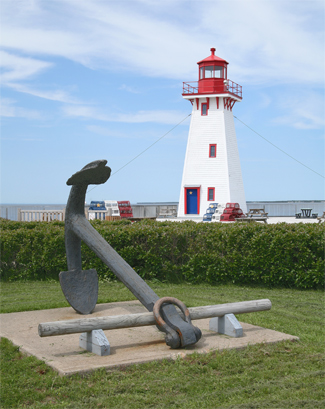 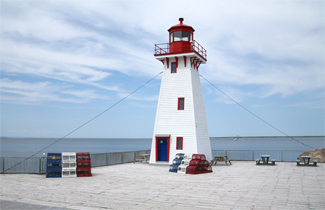 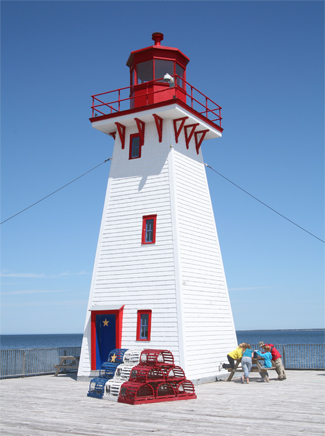 For mariners, two barrier islands border the main entrance to Inner Miramichi Bay: Portage Island to the north and Fox Island to the south. Work on a square lighthouse commenced on the southern end of Portage Island in September of 1869 to mark this important passage, and the towers light was first exhibited on October 6th of that year.

George Davidson was appointed the first keeper of Portage Island Lighthouse, but no dwelling was provided for him on the island. Rather, his only shelter was a small shed, which the Department of Marine conceded was not sufficient in cold weather. The original buildings on Portage Island cost $604.40, and an additional $300 was requested to build a small house for the keeper. As no title for the land had been procured prior to construction, John Harley, Inspector of Lights, Buoys and Beacons in New Brunswick, suggested that two acres of land and a right of landing be procured from the lessees of the island.

A dwelling for Keeper Davidson was completed in May of 1872, but in February of 1875, it was destroyed by fire. Keeper Davidson was dismissed in August of 1875 and replaced by Hugh Murray. While visiting the station later that year, the inspector noted, the light here is not so well kept as formerly, as the present keeper does not understand keeping his lamps in proper order, but will likely improve in time. The lighthouse was also not as clean as usual, but this was attributed to the fact that Joseph Carter, who was building the new keepers dwelling at a contract price of $1,000, had some of his workmen occupying part of the lighthouse as a sleeping apartment. The inspector requested a new lighter boat for the station along with a marine telescope and a stove for the keepers dwelling to replace the one destroyed during the fire.

During a visit in 1876, the inspector noted that the lighthouse and keepers dwelling were not receiving the necessary attention from the keeper. The tidiness of the station differed very much from similar stations, owing no doubt, the inspector concluded, to the want of female assistance. This issue was soon addressed as in the following years report it was noted that the keeper had two female assistants, and everything looks neat and clean.

In April of 1881, Duncan Robertson was appointed keeper of Portage Island Lighthouse in place of the retiring Keeper Murray. Just a few weeks later, Keeper Robertson passed away and was replaced by James Stymest. At this time, the keepers were earning $200 per year.

A breakwater was put in place in 1883 to prevent the sea from further encroaching on the station. In 1895, Peter Drummond repaired the lighthouse, installing seven new sills, twelve new posts, a new doorframe and door, and shingling the building. That same year, the keeper painted three sides of the dwelling, the lighthouse, and the lantern, inside and out.

In 1908, a mast light was placed on Portage Island to serve as a front range light when aligned with the existing lighthouse. This new light consisted of a Chance anchor lens lantern hoisted atop a twenty-seven-foot-tall pole. A new dwelling was built on the island in 1958 when Joseph Savoie was keeper.

Portage Island Lighthouse was a familiar site for Edouard Savoie, who for fifty-eight years fished for lobster, salmon, oysters, and smelt off the Acadian Peninsula. When a modern tower replaced the lighthouse in the 1980s, Savoie tried to purchase it, planning to move it to Neguac and use it as his home. The New Brunswick Aquarium and Marine Centre, however, had deeper pockets and won the bidding war for the lighthouse in 1986.

With experience in restoration work, Donald Boudreau, of the Village Historique Acadien, led the effort in 1986 to disassemble the lighthouse into three pieces, transport it by boat to Burnt Church, and finally reconstruct the tower on a wharf near the New Brunswick Aquarium and Marine Centre. The lighthouse was home to a visitor information centre, but is now empty.

Edouard Savoie didnt let the loss of Portage Island Lighthouse spoil his dream of a lighthouse home. Rather, he built his own lighthouse on Neguac Bay, painted the exterior in Acadian red, white, and blue, and has been living in it since 1992. From the top of his lighthouse, Savoie can look out over Miramichi Bay and even catch a glimpse of Portage Island.

For a larger map of Portage Island Range Rear Lighthouse, click the lighthouse in the above map.

From Route 113 (Boulevard J.D. Gauthier) in Shippagan, turn north onto Rue 12 and after one block turn left onto Avenue De l'Eglise and then make a right onto Rue De l'Aquarium, which terminates near the lighthouse. The lighthouse is on a public boardwalk near the New Brunswick Aquarium and Marine Centre.

The lighthouse is owned by New Brunswick Department of Tourism and Parks. Grounds open, tower closed.