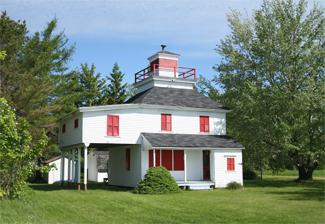 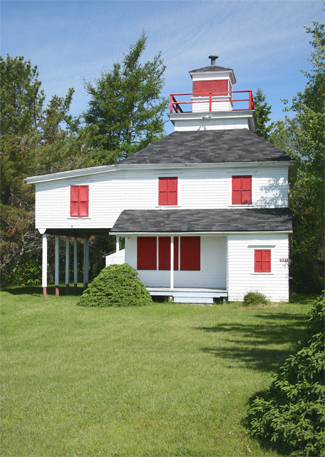 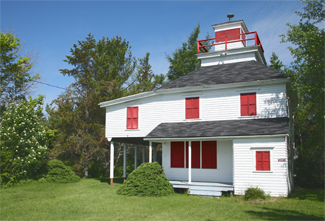 To enter Inner Miramichi Bay, mariners pass between Portage Island and Fox Island, both of which were once home to lighthouses, and then continue west for thirteen miles before entering the Miramichi River. Roughly eight miles into the Inner Bay, vessels would pass between Grand Dune Island on their right and Point aux Carr on their left. The area around Grand Dune Island, was a shallow area known as Grand Dune Flats or Grandoon Flats that presented a hazard to navigation.

In 1884, the dredge St. Lawrence spent the summer improving navigation in Inner Miramichi Bay. Besides creating a channel through Horse Shoe Shoal near the entrance to the Inner Bay, it also dredged Grand Dune Channel by making a cut, 1,080 feet in length, 140 feet in width, and measuring twenty-two feet in depth, at Grand Dune Flats. Dredging operations were carried out at Grand Dune Flats roughly every decade to keep the channel in good condition.

In its 1916 annual report, the Department of Marine noted that range lights had been constructed by A. Fitzgerald of Newcastle, under a $2,768.28 contract, to mark Grand Dune Channel. An additional $1,631.18 was spent for the provision, installation, and inspection of the lighting apparatus. The front range light was displayed from a square lantern centered atop the hipped roof of a square, two-story keepers dwelling, while the rear light shone from a steel skeleton tower. Donald A. Ross was keeper of the Grand Dune Flats Range Lights from the time of their establishment until 1933. His beginning annual salary was $323.75.

During the summer of 2002, Nancy and Don Kohr visited several lighthouses in New Brunswick using information found on the website of the now-defunct New Brunswick Lighthouse Society. While traveling near Miramichi, the Kohrs met Terry and Ferne Kilbride, owners of what the lighthouse societys website described as an imitation light. Certain that their lighthouse was authentic, the Kilbrides contacted Kelly Anne Loughery, president of the lighthouse society, to set the record straight.

The Kilbrides only knew that their lighthouse formerly stood on an island in Miramichi Bay, but a little research soon revealed the structures true identity. Turns out that after the Grand Dune Flats Range Lights were decommissioned, the combination dwelling and front light was sold to Murray Anderson, who towed the lighthouse across the ice to its current location in Burnt Church in the 1950s. Anderson used the lighthouse as a summer cottage for several years before selling it to Ellen Kilbride in 1967.

The lighthouse has seen some minor alterations since being used as a cottage. Ellen Kilbridge removed the verandah railing and enlarged a front window using storm windows acquired with the lighthouse. In the early 1990s, Ellens son Terry added a carport with a wing above it to one side of the lighthouse. The rediscovered Grand Dune Flats Lighthouse is the only one of its style remaining in New Brunswick.

For a larger map of Grand Dune Flats Range Front Lighthouse, click the lighthouse in the above map.

In the community of Burnt Church, make a right turn from northbound Highway 11 onto Church River Road. Drive 3.6 km (2.3 miles) to the end and make a left turn onto Bayview Drive. Grand Dune Flats Lighthouse can be found at #391 Bayview Drive and may be easily viewed from the side of the road without trespassing.