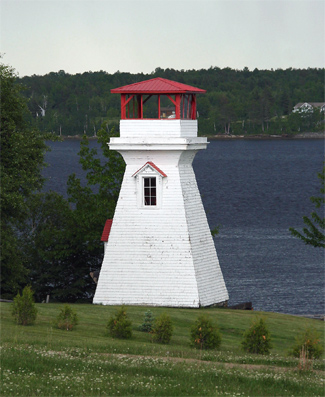 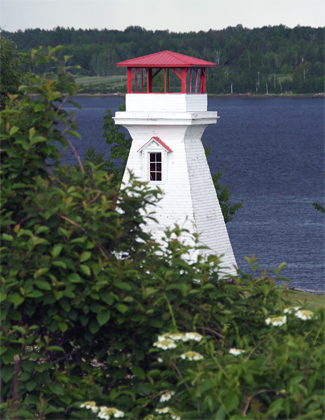 In 1869, two sets of range lights were established to guide vessels through Miramichi Bay and up the Miramichi River. The outermost set was placed at Oak Point, while the inner set was located at Grants Beach. The acquisition of the sites and construction of the lights cost $1,136.34, and the beacons were first exhibited on May 17, 1869. The Annual Report of the Department of Marine noted, The masters of the two lines of steam ships running up the Miramichi, speak highly of the advantage derived from them, in enabling them to navigate the river on the darkest night.

Thomas Coughlan was hired as keeper of the Oak Point Range Lights in 1869 at an annual salary of $100.

In 1875, just a year after Joseph Coughlan replaced Thomas Coughlan as keeper, it was noted that the fixed white Oak Point Range Lights were not as effective as other lights in the area. Shipmasters and pilots didnt fault Keeper Coughlan, as he was an old experienced hand and knew how to keep his lamps in order. Rather, the blame for the poor lights was attributed to their being too low and to the woods behind that prevented them showing as well as they otherwise would.

No changes to improve the lights around that time period is noted, but in 1885 Mississippi lanterns replaced the lamps at the station and were called a great improvement.

In 1904, enclosed towers were constructed at Oak Point to replace the previous lights that consisted of lanterns shown from masts. These new lighthouses, square in plan with sloping sides and surmounted by square wooden lanterns, were placed in operation on October 6. Dioptric lenses of the seventh-order were used in the towers to produce fixed white lights that could be seen at a distance of up to twelve miles. The front tower was thirty-three feet from its base to the top of the ventilator on its lantern and displayed its light at a focal plane of forty-five feet above the high water mark. The rear tower, situated 1,800 feet from the front tower, stood fifty-three feet from its base to the top of its ventilator and had a focal plane of sixty feet. R. A. Russell of Loggieville, New Brunswick built the towers under a $1,480 contract.

Charles Bowie served as the last keeper of Oak Point Range Lights from 1939 until his services were terminated in December 1952, when the lights were discontinued. Oak Point Front Range Lighthouse was subsequently moved 17 km (10.5 miles) west to the backyard of a residence between Millbank and Moorefield. An oversized cupola that affords great views of the Miramichi River has replaced the towers original lantern room.

For a larger map of Oak Point Range Front Lighthouse, click the lighthouse in the above map.

Take Route 11 to the northern side of Miramichi River, and then continue east on Route 11 for 2.2 km (1.4 miles). The lighthouse is located on private property near #2884 Route 11 and can be easily viewed from the side of the road without trespassing.