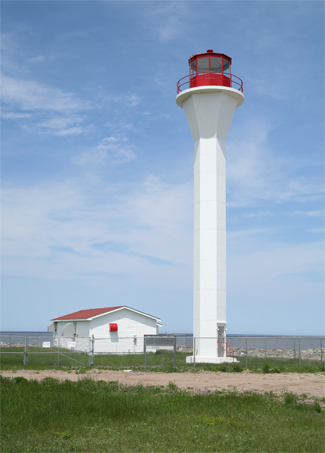 Point Escuminac is an important location on New Brunswicks northeast coast, as it marks the southern entrance to Miramichi Bay, and, along with North Point on Prince Edward Island, the northern entrance to Northumberland Strait. The name Escuminac is derived from a Mi'kmaq word meaning watching place or look-out place.

During an address in 1820, George S. Smyth, Lieutenant Governor of the Colony of New Brunswick, informed the House of Assembly that he would take the requisite steps to see a lighthouse built on Point Escuminac as they had recommended. Twenty years later the lighthouse had still not been built, likely because no law had been passed for levying duties on shipping at Miramichi to pay for maintaining the lighthouse. New Brunswick had been collecting lighthouse duties at ports on the Bay of Fundy for years, and these funds had paid for the maintenance and construction of nine lighthouses there by 1840.

A petition, calling for the erection of a lighthouse on Point Escuminac, was brought before the House of Assembly in 1840 signed by the two most prominent merchants of the Miramichi area, Gilmour Rankin and Joseph Cunard, and 100 other merchants or prominent citizens of that place. This spurred the House to grant £600 for the project, and work commenced on the point later that year. In 1841, another £748 was allocated for Point Escuminac Lighthouse, and it was finally put into operation on August 12th of that year, the tenth lighthouse in the colony and first on its northern coast. The total cost of the lighthouse and associated keepers dwelling came to £1,795, which included a supply of oil and six months of salary for the keeper. Thus another £447 had to be deducted from the lighthouse fund in 1842, but over £450 had been collected at ports on the Gulf of Saint Lawrence that year, which more than covered the cost.

The original Point Escuminac Lighthouse was an octagonal tower, made of hand-hewn lumber held together with wooden pins and covered with pine shingles. Six Argand lamps and reflectors were originally employed in the lantern room to produce a fixed white light at a height of seventy feet above high water. John McEwan was hired as the first keeper, receiving an annual salary of £95, though this amount was subsequently reduced. The lighthouse was quite isolated until £100 was provided in 1846 to complete a road to the station. The effectiveness of the lighthouse was soon noted, as the occurrence of marine disasters in the area was greatly reduced.

When built in 1841, Point Escuminac Lighthouse was located ninety feet from the extremity of the point, which is composed of fragile sandstone. Prior to 1860, roughly a foot and a half of shoreline was lost to erosion each year, but during a great easterly storm that year, thirty feet were lost in a few hours, leaving just thirty feet between the sea and the lighthouse. Fortunately, the sandstone shingles and boulders washed up by the storm built a thick wall, from eight to ten feet in height, around the station, but an even stronger storm in 1862 pushed this defensive work back to the lighthouse. The storm surge rose to the level of the ground floor of the dwelling and lighthouse, and Keeper William Hay felt his family was in imminent peril.

The relocation of the station to an elevated spot 400 feet inland was recommended after the storm of 1862, and strongly backed by Keeper Hay, but the buildings remained right where they had been built until 1879, six years after Keeper Hay passed away after twenty-nine years of service at Point Escuminac.

In September of 1869, the original lantern and lighting apparatus, reported to be worn out and leaky, were replaced with a third-order French Fresnel lens and a new lantern at a cost of $1,301. A temporary light was exhibited while the change was effected, and pieces of the old lantern were used to construct a new lantern for the nearby Portage Island Lighthouse, then under construction.

A fog whistle went into operation at Point Escuminac on June 1, 1874. The whistle, which along with the associated machinery cost $4,871, sounded ten seconds in each minute during fogs and was tended by Thomas Philips, who received an annual salary of $800 for overseeing both the light and fog alarm. The original keeper's dwelling was too small to accommodate Keeper Philips family of eight, so an addition was built in 1875. A foghorn, which sounded six-second blasts separated by intervals of thirty-five seconds, replaced the fog whistle in 1887.

Keeper Philips took over in 1873 after the death of Keeper Hay and served until his own passing in 1888, when James Carter was appointed keeper. Carter received an annual salary of $700 as keeper of the light and engineer of the fog alarm, out of which he paid an assistant. By this time, there was a meteorological station and signal station at Point Escuminac, and H. W. Phillips was receiving $84 each year for keeping the former and $50 for the latter.

James Carter and H. W. Phillips were both dismissed in 1892 after charges were brought against them and confirmed during an investigation. Keeper Carter had submitted several fraudulent accounts to the Department of Marine totaling $48. The persons in whose name the fraudulent accounts were submitted would receive a cheque for payment, endorse it, and hand it over to Carter, who would cash it. Mr. Phillips was dismissed for unauthorized absences from his stations.

In a reply to his dismissal letter, H. W. Phillips congratulated the Department in getting rid of a great rascal in the person of the late keeper who has ignored the Departmental regulations since he came here and who left his station in December last and did not return until the 5th inst. (April). And who no doubt got his full pay for leaving the valuable property at the mercy of the world. Phillips acknowledged his temporary absences but asked the Department to reconsider. I think that after my long service at this place being here for eighteen years in connection with this station the department might have pardoned me and tempered justice with mercy especially as the remuneration was so small for the work performed.

Kenneth R. McLennan took charge of all operations at Point Escuminac, including the signaling and meteorological stations, in 1892 for an annual salary of just $700, saving the Department over $134 each year.

Around 2 a.m. on September 30, 1901, Captain John McCarthy of the schooner Levinia, from Tignish, Prince Edward Island, was making his way to Miramichi in a thick haze. When about a mile south of Point Escuminac, Captain McCarthy picked up the light but claimed the foghorn was not in operation and did not sound until thirty minutes later when he passed north of the light. Upon reaching Newcastle, Captain McCarthy filed a complaint, which caused an investigation into the claim by the Department of Marine.

Inspector John Kelly was dispatched to take a statement from the captain and look into the matter. Six pilots employed at Miramichi Bay gave testimony that the foghorn, situated on the north side of the point, was often not audible south of the station, especially with an onshore breeze. However, the evidence that carried the most weight in exonerating Keeper McLennan was his own logbook submitted to the Department at the end of September, which showed that the fog alarm had been in operation from 11:10 p.m. on September 29th until 7:50 the following morning.

In 1906-1907, the fog alarm building was converted into an engine room for a new three-inch diaphone fog alarm plant, and an extension was added to house two fifty-horse-power boilers and a coal room. The Canadian Fog Signal Company of Toronto supplied the plant at a cost of $4,600, while installation and alterations to the building were done by day labour for $4,870. By 1935, the boilers were worn out, and an acetylene gun was used as a fog alarm for roughly five years, until a new air horn, powered by an oil engine, was installed.

A new keepers dwelling and boathouse were built under contract by Edward Rourke of St. John West in 1910 for $1,975, while a well was sunk by T. Contour of Escuminac for $60. An electric lighting plant was installed in 1914.

A powerful light and a working foghorn couldnt prevent the maritime tragedy known as the Escuminac Disaster. On the evening of June 19, 1959, fifty-four boats set out from Escuminac Harbour in pursuit of salmon, which were having a very good run that year. The 5 p.m. weather forecast did not anticipate the strength of the approaching storm, a hurricane that had remained offshore after passing over Florida until it strangely looped into the Gulf of St. Lawrence. By the time a storm warning was issued, it was too late for the fleet, which had already set their nets to drift for the night, as the boats were not equipped with radios.

According to a news report of that time, The storm struck with sudden severity and the calm sea soon became a boiling cauldron of mountainous  50 and 60-foot waves, which tossed the small boats about like matchwood. Twenty-two fishing boats sunk, and thirty-five men and boys drowned, leaving behind twenty-six widows and eighty-three fatherless children, a very devastating blow to the small communities on the bay. A monument, inscribed with the names of the victims, stands near Escuminac Harbour today.

In early 1965, the Miramichi Historical Society learned of plans to demolish Point Escuminac Lighthouse and promptly wrote their Member of Parliament to see if they could acquire "the lantern, which consists of a series of prisms, etc., and which was made in Paris." The Department of Transport responded that the lens was to be installed at another major light station, but that the society could have the lantern room. Unfortunately, the society was only interested in the lens, and thus no remnant of the original Point Escuminac Lighthouse, which was demolished in November 1966, remains in the local community.

The present concrete, hexagonal Point Escuminac Lighthouse was built in 1966 and is the only example of this apple-core design in New Brunswick. Four windows, spaced one above the other on one face of the seventy-three-foot-tall tower, provide light for the interior staircase. When first built, the tower featured stripes, but today the tower is painted white. Besides the lighthouse, a foghorn and weather station are also found on the point. The lighthouse was de-staffed in 1989.

Located on Point Escuminac, marking the entrance to Northumberland Strait to the south and Miramichi Bay to the west.
Latitude: 47.07292, Longitude: -64.79786

For a larger map of Point Escuminac Lighthouse, click the lighthouse in the above map.

From Route 117 in Escuminac (16 km north of Pointe Sapin), turn east at the stop sign onto Point Escuminac Road. After 4.6 km (2.9 miles), the pavement will end, but a dirt road continues another 5 km (3.1 miles) to Point Escuminac Lighthouse. The dirt road was greatly improved in 2008 and should be passable with any type of vehicle. By 2017, the road had deteriorated significantly, and traveling it only with a high-clearance vehicle was advised.