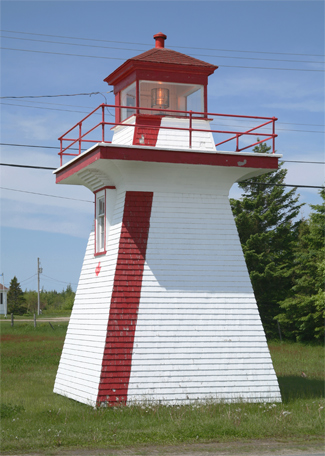 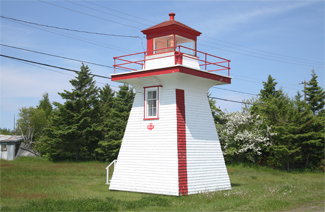 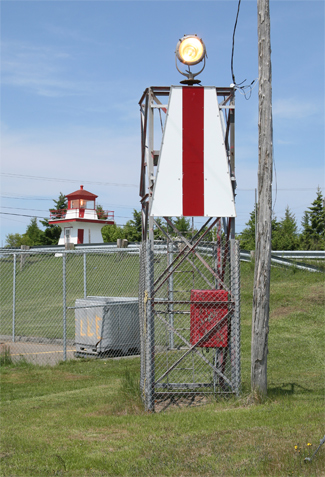 Pointe Sapin was originally known as Point-aux-Sapins, presumably due to the presence of fir (sapin) trees. Attracted by rich fisheries and fertile soil, settlers arrived in Pointe Sapin in 1860. The surnames of these pioneers included Daigle and Robichaud, names which are carved into a good share of the tombstones in the local cemetery.

The 1903 Annual Report of the Depart of Marine records the establishment of a light at Pointe Sapin to aid its fishermen.

A pole light, established in the settlement of Sapin point, at the north extremity of Kouchibouguac bay, was put in operation on May 28, 1903, and will hereafter be maintained whenever fishing operations are being conducted in the neighbourhood.
The light is fixed white, shown from a seventh order lens lantern hoisted on a pole. It is elevated 50 feet above high water mark and should be visible 12 miles from all points of approach by water.
The pole is painted white, is 34 feet high, and has a white wooden shed at its base. It stands 50 feet back from the edge of the sandstone cliff which forms the shore; between Messrs. Loggies lobster factory and the Roman Catholic church.

Fishermen were notified that they could run for the light between the bearings of 248° and 338°. Remaining within this arc of ninety degrees would keep them clear of the southern end of Sapin Ledge and a reef south of the light.

In 1910, the pole light was replaced by a twenty-seven-foot-tall lighthouse, built under contract by James Legoof of Richibucto for $440. This new light was also fixed white but produced by a sixth-order lens. The following year, a breakwater wharf was constructed at Pointe Sapin to provide shelter for fishing boats.

The lighthouse currently displays a fixed yellow and is paired with a square, skeleton tower to form range lights that indicate the proper approach to the harbour. Red stripes on the two towers also indicate the range line.

For a larger map of Pointe Sapin Range Rear Lighthouse, click the lighthouse in the above map.

From Hwy 11 near Kouchibouguac National Park, take Exit 74 and travel 32.2 km (20.1 miles) on Route 117 to the lighthouse, which is immediately adjacent to the roadway.