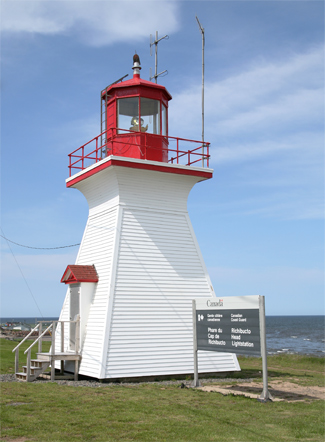 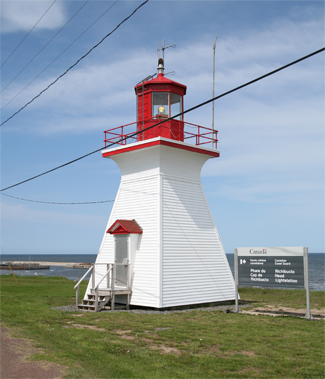 Richibucto, a Mi'kmaq word meaning river of fire, had been home to the Mi'kmaq, and Acadian and English settlers for many years, when in 1826 its residents decided to change the name to Liverpool. The name change created a problem, as mail intended for the community would often end up in Liverpool, Nova Scotia, so in 1832 the name was changed back to Richibucto.

In the early 1800s, Richibucto was the third largest shipping port in New Brunswick and many shipbuilding sites sprung up along the Richibucto River. One shipbuilding family, the Jardines, built Richibuctos first square-rigged vessel, the Ellen Douglas, in 1819 and would launch over one hundred vessels until business declined in the 1880s. Richibuctos most famous vessel was the Parnell, built by Henry OLeary. She was the fastest ship of her time and set many sailing records including a voyage from Fleetwood, England to Galveston, Texas in nineteen days, when the average time for this trip over the previous six years was fifty-six days.

In 1857, the House of Assembly of New Brunswick authorized the Lieutenant Governor to have a lighthouse erected on Richibucto Head at a cost of £250, which was to be taken partly from the Buoy and Beacon Fund and partly from the Gulf of Saint Lawrence Light House Fund. That same year the lighthouse dues for the Gulf of Saint Lawrence were increased from two pence to three pence per ton.

For some reason, work on the lighthouse did not commence, and two years later, in 1859, the Lieutenant Governor was requested to ascertain the propriety of establishing a Light House on Richibucto Head. John Wilkinson was dispatched to Richibucto in May of 1861 to examine the coast at that place and select a suitable place for a lighthouse. Wilkinson visited three sites and determined that a sandy point, located roughly four miles southeast of the entrance to Richibucto Harbour and the easternmost point in the vicinity, was the most favorable position. The site could be acquired at little cost as it was deemed worthless for any other purpose, but the low-lying land would require a tall lighthouse. This preferred site was not selected. Instead, the lighthouse was constructed on Richibucto Head, a short distance south of the point, where a shorter tower could be used and where the lighthouse could be maintained at less expense given the proximity to a settlement.

Amos Keith was awarded a contract of $592 to construct Richibucto Head Lighthouse by the 1st day of July 1863. The contract specified that the tower be of quadrangular form, strongly built of wood, anchored to a foundation of masonry measuring 16 feet on each side at the base. The height of the focal plane of the light above the ground will be 42 feet, and about 70 feet above the level of high water.

Amos Keith fulfilled his contract in a satisfactory manner, but the lantern and lighting apparatus were not ready in time to be transported aboard a vessel bound from Britain to Richibucto in the spring of 1864, so the items were shipped to Saint John instead. When the fourth-order lens intended for Richibucto Head arrived in Saint John, authorities considered installing it in that citys Harbour Beacon and transferring the reflectors in use there to Richibucto. This plan, however, was found objectionable, and the fourth-order lens was shipped to Richibucto, where it was installed in time for its inaugural lighting on May 2, 1865. The total cost of the lighthouse and land came to $1,346.85, while $1,606.25 was spent on the lantern and lens.

The tower was found to leak during rainstorms so it was reshingled, painted, and outfitted with a new lantern deck in 1869. The following year the light was improved through the substitution of a round wick lamp for the flat wick lamp previously in use. The flat wick lamp only consumed a pint of oil each night on average, and as a result no oil had to be shipped to the station during the prior four years.

Fabian Richard served as the first keeper of Richibucto Head Lighthouse, and in 1875 it was noted that he had a family of eight, including himself and wife, besides a married son and his wife who also lived with them. Peter F. Richard became the second keeper of the lighthouse in 1895 and served until 1934.

Fred J. Blanchard, the final keeper of the light, served from 1947 until 1965, when the light was electrified.

The entrance to the Richibucto River lies between two sandbars, each several miles in length, and has a bar that is extremely dangerous. A pair of range lights was established on the southern sandbar, known as south beach, in June of 1879. The front light consisted of a square wooden tower with an attached dwelling, and the rear light was displayed from an open-frame tower. In 1901, the original ranges lights were replaced with two new pairs of range lights as the channel had changed and two ranges were needed to properly mark it. These range lights had to be relocated several times over the years to track the ever shifting channel.

None of the range lights used to mark the harbour entrance survive, but Richibucto Head Lighthouse remains active, sending out a white flash every five seconds.

Located on a headland in Cap Lumière, across Northumberland Strait from the West Point Lighthouse on Prince Edward Island.
Latitude: 46.669806, Longitude: -64.711667

For a larger map of Richibucto Head (Cap Lumière) Lighthouse, click the lighthouse in the above map.

From Highway 11 in Rexton, take Exit 53 and travel 1.5 km (0.9 miles) north on Route 134 and then turn right onto Centennial Avenue. After 3 km (1.9 miles) Centennial Avenue will bear right and become Route 505. Continue 11 km (6.9 miles) to the Village of Cap Lumiere and then turn left at the stop sign and drive 1.1 km (0.69 miles) where you will find Richibucto Head Lighthouse adjacent to the roadway.