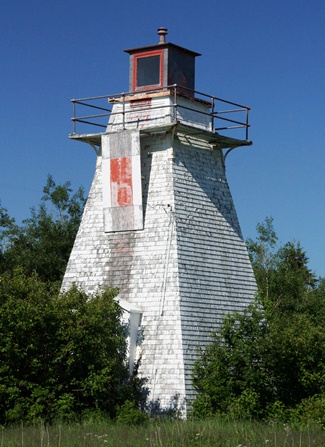 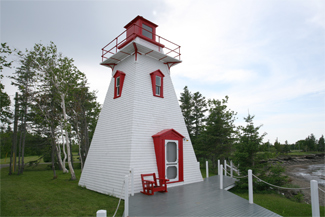 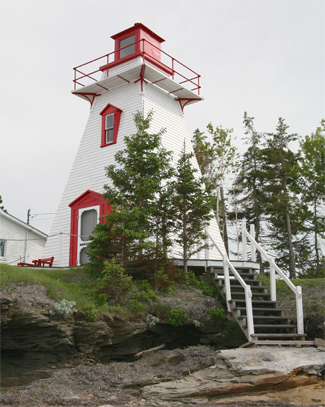 François and Charlitte LeBlanc arrived in what is now known as Bouctouche on June 24, 1785 and carved a cross in a great pine tree to mark the establishment of an Acadian village. The Mi'kmaq had previously named the area Chebooktoosk, meaning great little harbour. A corrupted version of this name, Bouctouche, was applied to the bay and its major river, which have sustained the village of the same name through the years. Around 1900, considerable trade in lumber, coal, and fish was being carried out at Bouctouche, and sawmills and gristmills were situated on the river near the head of the tide.

The construction of a pair of range lights to guide vessels into Bouctouche Harbour was noted in the annual report of the Department of Marine and Fisheries for 1881:

A contract was entered into with Mr. John Ward, builder, Shediac, for the construction of two wooden range light towers at Buctouche, and was satisfactorily executed by him, the contract price being $730. These lights stand on Dixon's Point, on the south side of Buctouche Harbour, and guide vessels into the Harbour. The front building is situated on the point near the old beacon, and consists of a square wooden tower 30 feet high. The light is fixed, white, catoptric, elevated 36 feet above high water mark, and should be visible 11 miles in the direction of the range.

The back range light is distant 1,050 feet northwest by north from the other, the building is similar and a light of the same description is shown, elevated 41 feet above high water, and visible 12 miles.

Dixon Point Range Lights, put into operation on June 9, 1881, replaced a set of day beacons that had previously stood on Dixon Point. Thaddee B. Robichaud was hired as the first keeper of the lights at an annual salary of $150. The height of the rear range tower, from base to vane, was thirty-four feet.

Mariners would use the Dixon Point Range Lights to reach the entrance to Buctouche Harbour and then would follow the Church or Indian Point Range Lights, established in 1883, to enter the harbour up to the point where the channel turned abruptly westward to enter Bouctouche River.

Henry B. Robichaud served as keeper of the range for fifty-three years, and when died in 1936, his son Zepherin cared for the lights for a few months before Neri Maillet, the stations last keeper, was appointed.

The rear range tower was in very poor condition when Andre & Yvette Maille purchased it in 2005 for $1. The inactive tower has since been restored and relocated to the shore, just north of the still-active front tower. This work took place during 2009/2010. In 2008, the front tower was repainted, and the surrounding area received an environmental cleanup.

The population of Bouctouche has never been great, but it has produced one very notable billionaire, Kenneth Colin (K.C.) Irving, whose companies included Irving Oil and J.D. Irving Limited, which started as a sawmill in Bouctouche.

For a larger map of Dixon Point Range Rear Lighthouse, click the lighthouse in the above map.

Take Route 535 to the community of Saint-Thomas-de-Kent and you will see Dixon Point Range Rear Lighthouse three houses from the Dixon Point Lighthouse.