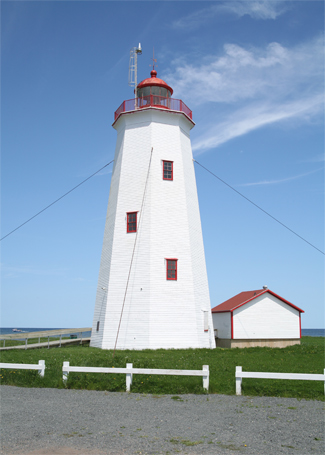 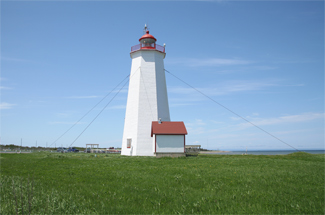 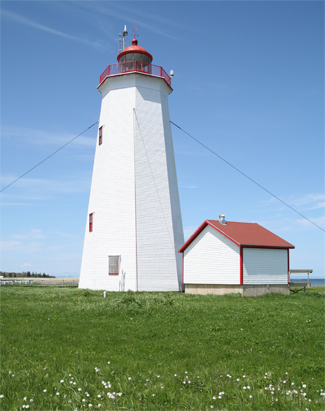 In 1853, the Commissioners of Lights for the Gulf of Saint Lawrence promoted the need for a lighthouse on Birch Point, the northeast point of Miscou Island, where, they noted, shipping accidents occurred annually that likely could be prevented by a lighthouse. The Lighthouse Committee for New Brunswick acknowledged the importance of a light on Miscou Island to serve the foreign and local vessels passing the point while engaged in trade in Chaleur Bay and along the Saint Lawrence River but regretted that the Lighthouse Fund did not permit the outlay necessary for the lighthouse. Still, the Committee recommended that the Commissioners select a suitable site and submit an estimate for the proposed lighthouse. A petition from Ferguson, Rankin and Company, George and A. Smith, John Meahan, and twenty-six other merchants and inhabitants of Bathurst calling for a lighthouse on Miscou Island was presented to the House of Assembly in 1854. Joining this petition was a letter from the agent at Bathurst for Lloyds, the noted marine insurer, which read in part, In view of the great number of casualties to shipping on the Island of Miscou, at the entrance of this Bay, and the consequent vast loss of property, it becomes a matter of some importance to endeavor to get a Light House established there as a means of averting these evils.

The Commissioners for the Gulf of Saint Lawrence reported in 1854 that they had selected a site for the lighthouse and estimated the structure would cost £2,000. The Lighthouse Committee felt the only way to justify the outlay would be to raise the Lighthouse tax by one penny to two pence per ton. With this increase in place, £1,200 was appropriated on March 31, 1855 for the erection of a lighthouse and keepers dwelling on Miscou Island. The Commissioners recommend the whole point north of Fishermans Lake along with 500 acres of woodland be reserved for the lighthouse.

Construction of the lighthouse, keepers dwelling and a woodshed was opened to bids, and a £1,220 contract, stipulating that the work be done by September 1, 1856, was awarded to James Murray of Newcastle on August 25, 1855. One third of the contract, which did not include the lantern, was to be paid upon the contractor obtaining bonds for the work, another third was to be paid as the work progressed, and the final third when the work was completed.

After the lantern arrived from England on the 10th of October, 1856, Keeper William Hay, who was in charge of the Point Escuminac Lighthouse, the only other lighthouse on the northern coast of New Brunswick, was sent to Miscou Island to oversee the installation of the lamps and reflectors. Keeper Hay placed the light into operation on November 4, and then passed responsibility for its care to George McConnell, a practical engineer and mechanic, who had been selected by the Commissioners from a pool of thirteen applicants. The total cost for the lighthouse came to £2,200, and Keeper McConnell initially received an annual salary of £125.

The wooden, octagonal Miscou Island Lighthouse originally measured seventy-four feet from its base to the top of the vane on the lantern room. The lighthouse is quite similar to the original Point Escuminac Lighthouse, built in 1841, but is a few feet taller. Eight lamps, equipped with colored chimneys and backed by reflectors, were initially used in the lantern room at Miscou Island to produce a fixed red light.

In 1860, it was noted that in calm weather, the draft was insufficient to clear the lantern room of smoke, so smoke conductors were installed. This improvement saved much labour and material needed to clean the glass and resulted in a more brilliant light.

During 1874, a wooden building was erected 107 yards east of the lighthouse to house a steam fog whistle. The fog alarm, which produced blasts of five seconds separated by twenty-five seconds, commenced operation in June of 1875 and was hailed by captains of steamers and sailing vessels as a great service in foggy conditions. The fog whistle cost $6,055 and was placed under the care of the keeper of the light, George McConnell.

In 1875 the iron lantern, which had a diameter of twelve feet and glass panes measuring 22 ½ x 21 inches, housed nine lamps, seven mammoth flat-wick lamps and two No. 1 circular-wick lamps. Each of the lamps was equipped with a twenty-inch reflector.

After more than twenty years of service at Miscou Island, Keeper McConnell passed away in 1877. Robert Rivers was hired as the new keeper and was paid an annual salary of $800, from which he hired David Bell to run the fog alarm. Throughout 1888 the fog alarm was silent owing to the need for a new boiler. When a larger boiler arrived at the station the following year, significant alterations were needed to accommodate it, and the fog alarm did not resume operation until September 24, 1889.

A new catoptric illuminating apparatus, which revolved once every seventy-five seconds and produced four bright flashes, with intervals of fifteen seconds between then, followed by thirty seconds of darkness, was installed at Miscou Island in time for the opening of navigation in the spring of 1894.

In 1908, the lighthouse tower was altered to accommodate a new lantern and Fresnel lens, which were manufactured in 1907 by Barbier, Benard, and Turenne of Paris, France. A plaque on the lantern door lists the officers of the Department of Marine who were serving when the new lantern and lens were made. In 1917, it was noted that the third-order Fresnel lens produced a group of two flashes every 7.5 seconds in this manner: flash 0.5 second, eclipse 1 second, flash 0.5 second, eclipse 5.5 seconds.

Seven protective groins were put in place near the lighthouse in 1938 in an attempt to build up the shore near the lighthouse. These groins were built perpendicular to the shore, but they did not extend to the low-water line and actually increased the rate of erosion. As they were located about the mean high-water line, the groins were only in the water at high tides or during stormy weather. In storms, the waves would strike the groins and be deflected against the bank causing severe erosion. To be effective, it was determined in 1942 that the groins would have to be extended at least 100 feet seaward and a seawall would have to be constructed. As the value of the land to be protected didnt justify this expense, plans were instead made to relocate the lighthouse, and the district engineer recommended in the meantime that the groins should be demolished.

On August 1, 1946 workers began relocating the tower 200 feet inland, after a concrete foundation at a new site had been prepared and skids had been put in place. The move was completed just over a month later on September 13. Wire stays were soon affixed to the tower after the move to help stabilize it.

An informational plaque installed on Miscou Island Lighthouse by Historic Sites and Monuments Board of Canada reads:

This lighthouse was built in 1856 at the southern entrance to Chaleur Bay by Quebec Trinity House, which then supervised navigation on the St. Lawrence River and Gulf. Considered a major coastal aid it merited the subsequent installation of a powerful dioptric light and a diaphone fog alarm. The octagonal tower of hand-sawn timbers, shingled on the outside, was originally 74 feet in height and was extended in 1903 to 80 feet. This lighthouse, substantially in its original state, is among the oldest in the Gulf of St. Lawrence region.

The plaque isnt quite correct as the tower was built by the Colony of New Brunswick. The tower didnt come under control of the Department of Marine in Quebec until 1928, when lighthouses were grouped geographically rather than by province. Control of the lighthouses on the northern coast of New Brunswick was divided between Quebec and Charlottetown.

The lighthouse was closed to the public in 2001 due to mercury contamination in the lantern room and lead paint in the soil surrounding the tower. The Fresnel lens formerly floated in a mercury bath, which allowed the lens to revolve with little effort and which was removed from the tower in 1995. The keepers would occasionally have to filter the mercury, so small amounts of it were spilled on lantern room floors.

The cleanup was scheduled to take a few days, but the lighthouse remained closed to the public for years. During the closure, the Province of New Brunswick spent nearly $2 million to make Miscou Island an eco-tourism destination. As part of this effort, the lighthouse received a new paved parking area, washroom facilities, and a large grassy area in 2009. Miscou Island Lighthouse, still equipped with its Fresnel lens, reopened to the public in 2010. In 2017, the province provided $250,000 to replace the siding and make other improvements to the lighthouse.

For a larger map of Miscou Island Lighthouse, click the lighthouse in the above map.

Follow Route 113 to its terminus at Miscou Island Lighthouse. The lighthouse is open from May through the long weekend in October.