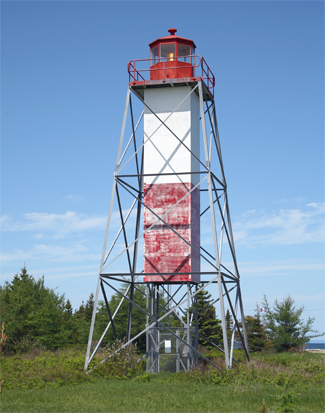 Black Point Lighthouse, a skeleton tower with an enclosed, square, central portion, was established in 1967. Although the tower may not be one of the more attractive lighthouses, it is the only one of its kind in New Brunswick and is still equipped with a fourth-order drum dioptric lens.

Formerly, the middle third of the square, central column was painted red, with the upper and lower thirds painted white. However, in 2009, the bottom third of the column's enclosure was missing.

For a larger map of Black Point Lighthouse, click the lighthouse in the above map.

Traveling north on Route 113 just before the bridge to Miscou make a left onto Route 313 (marked Point Campbell/Saute Cecile). Continue 3.2 km (2.0 miles) then make a right onto Light Road and continue 0.1 km to the lighthouse.