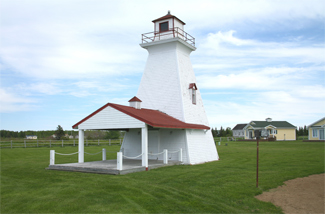 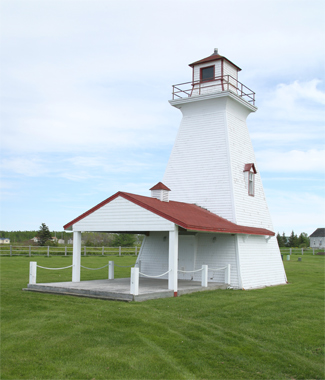 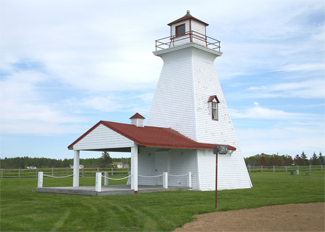 J. R. Chiasson was awarded a contract in 1902 for the construction of range lights to lead into the harbour at Lower Caraquet through Caraquet Channel. Mr. Chiasson, however, was unable to do the work, and John Kelly, Inspector of Lights, stepped in to see the towers completed and placed into operation on September 24, 1903.

Both lighthouses are enclosed wooden towers, square in plan, with sloping sides and surmounted by square, wooden lanterns. The front tower stands close to the shore, measures thirty feet from its base to the top of the ventilator on its lantern, and originally displayed a fixed white light from a seventh-order lens at a focal plane of thirty-one feet. The rear tower, placed 3,800 feet from the front tower, measures forty-five feet from its base to the top of its ventilator and displayed a fixed white catoptric light at a focal plane of seventy feet. When established, the Caraquet Range Lights were visible for up to ten miles along the line of range.

In 2000, the Canadian Coast Guard erected a thirty-seven-foot-tall skeletal tower to serve as the Caraquet Rear Range Light, and the 1903 tower was given to the Town of Bas-Caraquet. The old wooden rear tower was relocated to a municipal park, 1.3 km (0.8 miles) to the east, where it was refurbished, and a roofed patio area was added to one side of the tower.

For a larger map of Caraquet Range Rear Lighthouse, click the lighthouse in the above map.

From Route 145 in Bas Caraquet, drive north to the bay on Lanteigne Street where you will find Caraquet Rear Range Lighthouse in a park.

The lighthouse is owned by the Town of Bas-Caraquet. Grounds open, tower closed.