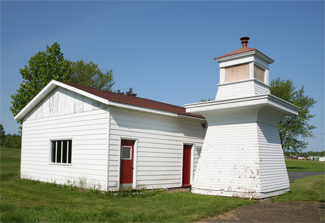 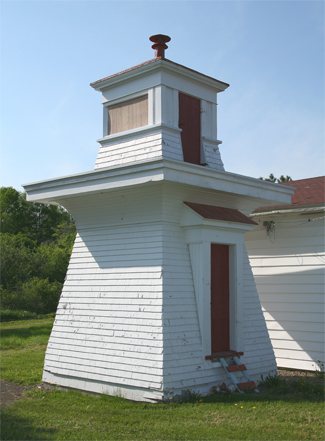 In the 1870s, Dalhousie Harbour, primarily used by vessels taking on loads of timber, was defined on the east by Dalhousie (Douglas) Island and on the west by Montgomery (Rock) Island. Both of these islets were connected to the shore by a sandy spit and between them vessels could anchor in forty feet of water perfectly secure from all winds.

An appropriation of $800 was made in 1879 to construct three sets of range lights (six towers) to guide maritime traffic on the Restigouche River. Two of these towers, which were each twenty-two feet in height, were placed at Dalhousie, two at Campbellton, and two between these others at Oak Point on the Quebec shore. Peter Naduux of Dalhousie was awarded a $762 contract for constructing the six towers.

The outer range light at Dalhousie was placed on the public wharf, while the inner light, elevated twenty-seven feet above high water, was shown from Montgomery Island. Due to the erection of a freight shed on the wharf by railway authorities, it was found necessary in 1884 to remove and add to the height of the beacons at Dalhousie. A lantern was placed atop the freight shed to align with the tower on Montgomery Island. In 1886, a square wooden tower, painted white, with a height of twenty-two feet was established on Douglas Island, also known as Dalhousie Island.

In 1905, the lighthouse on Douglas Island was replaced by an octagonal wooden tower, with sloping sides, that was erected on the northern point of the island, 250 feet from the old lighthouse. The octagonal tower measured fifty-three feet from its base to the ventilator on its lantern and employed a fifth-order dioptric lens to produce a bright flash every seven-and-a-half seconds. Patrick B. Troy of Dalhousie constructed the tower at a cost of $1,642.

In 1909, Patrick B. Troy built a twenty-three-foot wooden lighthouse tower on the Government Wharf for $645.02, and the light atop the railway and on Montgomery Island were discontinued. The new tower's fourth-order light had the following characteristic: visible 17 seconds, eclipsed 5 seconds, visible 3 seconds, eclipsed 5 seconds. A steel framework was placed beneath the tower in 1910/1911 to increase the height of the light. This work was done by day labour under the supervision of Patrick B. Troy for $453.

In 1879, seventy-one-year-old Malcom McNeill wrote J.C. Pope, the Minister of Marine and Fisheries in Ottawa, asking for the position of keeper of the soon to be completed lighthouses at Dalhousie. Malcolm was awarded the job, but decided his son, Henry Havelock McNeill, born in 1858, would be better suited for the work. Keeper McNeill started at an annual salary of $100 and tended the lights on Dalhousie Wharf and Douglas Island until 1930. During this fifty-year period, Keeper McNeill and his wife Mary Anne raised twelve children in Dalhousie.

The 1917 edition of The St. Lawrence Pilot lists two lights at Dalhousie Harbour: a flashing white light exhibited from the octagonal tower on the northern point of Douglas (Dalhousie) Island, and an occulting white light shown from a white square building situated atop a brown framework structure and located 300 feet from the western end of the railway wharf. The Dalhousie Wharf light still had the same characteristic it had when established in 1910, but in 1917 it was also noted that the light had two red sectors.

In 1960, John Audet purchased the decommissioned Dalhousie Wharf Lighthouse after seeing a notice posted in a local store. Being in need of a storage shed at the time, Audet placed a bid of $25 on the lighthouse and ended up winning. Workers who were dismantling the wharf volunteered to take the lighthouse down off its supports, and Audet made arrangements to have the small tower trucked to his property. In 2002 the railing was still in place around the gallery deck, and there was a metal ladder going up the outside of the tower. By 2009, both the railing and ladder had been removed as the Audets children were all since grown.

The lighthouse has been maintained in excellent condition over the years with Mr. Audet even building stairs on the inside. He has plans to eventually donate the lighthouse to the community of Charlo and to this end he secured a modern lens from the Canadian Coast Guard in 2009 and has installed a mounting device in the lantern room.

The octagonal lighthouse on Douglas Island was severely damaged on February 22, 1974, when it was dropped while being relocated by a crane so the rest of the island could be leveled to create the east wharf. The tower was originally going to be burned, but Jack MacDonald fought to save the lighthouse, and the town requested that the contractors relocate the structure to a temporary location. Even after the fall, the lighthouse could have been salvaged, but as this would have required a great deal of money, the tower was scrapped.

For a larger map of Dalhousie Wharf Lighthouse, click the lighthouse in the above map.

The historic lighthouse is visible from Highway 134 in Charlo.