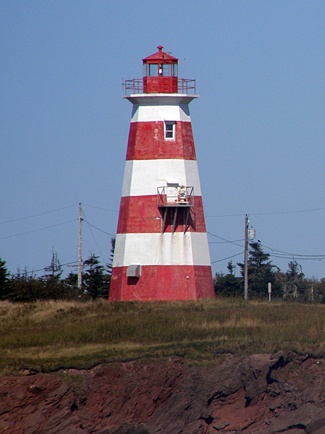 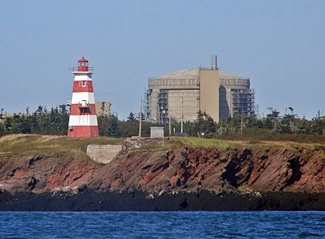 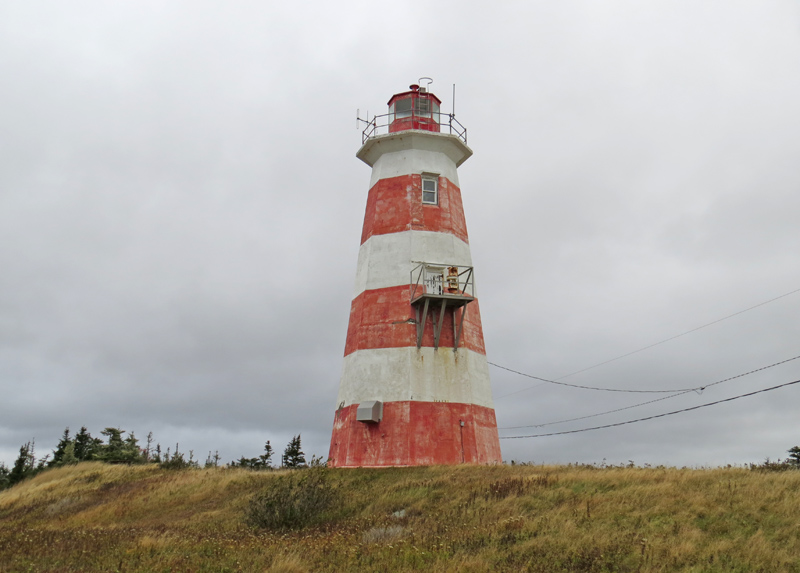 Situated roughly midway between Saint John and Saint Andrews, Point Lepreau juts some distance south into the Bay of Fundy, presenting a significant obstacle for coastwise shipping. The name of this feature, one of the most prominent along the Bay of Fundy, is likely a corruption of an early French designation, lapereau, meaning little rabbit.

A lighthouse at Point Lepreau was proposed by the Commissioners of Lighthouses for the Province of New Brunswick as early as 1827, when plans and estimates for such a structure were laid before the House of Assembly, however, it wasnt until 1831 that the commissioners were granted £500 to cover construction.

J. C. Waterbury was paid £343 for building the keepers dwelling and lighthouse, Harris & Allen received £165 for supplying two lanterns, E. Stephens submitted an account of £52 for two copper fountain lamps, and Robert Rankin & Co. supplied the needed glass at a cost of £14.

As noted in the list of expenditures, Point Lepreau was unique in that it exhibited two lights. L. Donaldson, Surveyor of the Bay of Fundy Lighthouses, described this interesting feature in an 1839 report in which he noted that the upper light atop the tower was composed of five lamps in twenty-three-inch reflectors, while the second light, displayed from a lower floor of the tower, was produced by five lamps with fifteen-inch reflectors. Donaldson recommended that the lower lights be relocated to the ground floor as the two lights merged into one when observed at a distance of just five or six miles. The performance of Daniel Pettingell, who started being paid for his service as keeper at Point Lepreau on September 1, 1831, was commended by Donaldson: Mr. Petingell has, by his perseverance and industry, made Point Lepreau, from being one of the worst stations, probably the best belonging to the Province, and he lives most comfortably.

In 1840, the lower light was moved from the second floor to the ground floor of the lighthouse, where it was twenty-eight feet from the upper light, and the tower and dwelling received a new coat of paint. The woods surrounding the station were cut back to provide a greater safety buffer due to the fear of forest fires during the dry season.

Guns and powder were provided to Keeper Petingell in 1848, so he could answer the bells or steam whistles of vessels. After leaving Saint John in foggy weather, steamers would run a prescribed period of time then, believing they were off Point Lepreau, would ring their bell or sound their whistle. Upon being answered by the gun at Point Lepreau, they were enabled to run on with confidence, having obtained a new departure. The fog alarm at Point Lepreau was greatly improved in 1869, when a steam fog signal was established. The total cost for the fog whistle and building, along with a dwelling for the engineer and a well for water was $3,702. J. Christy was hired as the first engineer for the fog alarm at an annual salary of $400, while George Thomas, Sr. was serving as the lighthouse keeper at the time.

New lamps with mammoth flat-wick burners along with new reflectors, of eighteen and twenty-two inches diameter, were installed in the lantern rooms in 1873. The light produced by this new arrangement could then be seen at Head Harbour Lighthouse and the north end of Grand Manan, a distance of twenty-four miles. This improvement came at a cost, as the new lamps consumed four quarts, one pint, and one gill of oil, nearly double that of the old lamps. New lantern rooms were recommended to replace those of the old style that had small panes of 12 x 14-inch glass and wide, flat sashes, which greatly obstructed the light.

A telegraph station was established in the sitting room of the keepers dwelling at Point Lepreau in 1874, and the daughter of Keeper Thomas was hired at an annual salary of $150 to serve as the operator. Miss Thomas would dispatch a weather report to Saint John twice a day along with a record of all the vessels passing the point. A $475 addition, measuring 20 x 16 feet with two bedrooms and a sitting room on the ground floor and two additional bedrooms upstairs, was made to the keepers dwelling the following year to compensate for the space used by the telegraph office. This was much appreciated by Keeper Thomas, as he had a large family.

After a visit to Point Lepreau Lighthouse in 1878, John H. Harding, Marine Agent at Saint John, included the following praise for Keeper Thomas in his annual report to Minister Albert Smith at Ottawa.

The reflectors of both lights have a bright and high polish, and reflect, like mirrors, objects put in front of them; we have none like them on this coast. I could not but ask Mr. Thomas how he obtained such a brilliant polish, and he replied that he occasionally used the silver wash supplied by me some few years ago. He was at first disposed to throw it away, believing that it did no good, but Mr. Thomas being a thoroughly intelligent and practical man, was determined to give it a fair trial before condemning it. He therefore persevered, using it as directed, and it was not long before he found the reflectors getting brighter and more brilliant, and by perseveringly continuing its use, they were in time covered with a new coating of silver, fully as bright, if not more so, than when they first came out of the silversmiths battery.

All the other keepers to whom the wash was supplied, had given up on the process before the desired effect was obtained.

Keeper George Thomas, Sr. passed away in 1884, and his son, George W. Thomas was appointed keeper in his stead. The following year a new fog alarm building was erected on the extreme point in front of the lighthouse, as some mariners felt the old signal was misleading due to its position east of the point. Messrs. Dewitt & Causey of St. John built the frame building at a cost of $1,987 to house an improved Champion foghorn. The old steam whistle was retained as a backup.

The lower light in the tower was discontinued in November 1886, as the new fog alarm building obscured it. This left just the single fixed white catoptric light showing atop the tower at an elevation of eighty feet above high water. The wooden octagonal tower was, at that time, painted in red and white vertical bands and stood forty-eight feet tall from the ground to the vane on the red lantern room. Prior descriptions of the tower, dating back to as early as 1847, noted that the lighthouse was painted in red and white horizontal bands.

In January 1898, a fire at Point Lepreau claimed the lighthouse, fog alarm, and thirty tons of coal. A Chance anchor lens was displayed from a mast as a temporary light until a new tower could be built. A new fog alarm building was constructed on the foundation of its predecessor, and the new signal commenced operation on March 9th. A new octagonal, wooden tower, situated 327 feet from the extremity of the point and 250 feet from the fog alarm building and surmounted by a red iron lantern, was put into operation on October 1, 1899. This tower measured fifty-four feet from its sills to the vane on the lantern, was painted in red and white horizontal bands, and displayed a revolving white light whose flashes attained their greatest brilliancy every thirty seconds. Francis Cassidy constructed the tower at a cost of $1,325, but the quality of his work was so poor that parts of it had to be redone to pass inspection.

The fog horn was replaced by a diaphone in 1905, necessitating the enlargement of the fog alarm building. An electric lighting plant was installed in 1913, and the tower received a triple flash reflector in 1918. A new dwelling was erected at the station in 1921 at a cost of $5,975.

During a storm in December of 1956, Point Lepreau Lighthouse was struck by lightning and totally destroyed. The present concrete tower, which retained the octagonal shape and the red and white horizontal bands of the prior lighthouse, was built on the point in 1958. Point Lepreau Lighthouse was de-staffed in 1980, and since that time all other station buildings have been removed.

For a larger map of Point Lepreau Lighthouse, click the lighthouse in the above map.

NOTE: The lighthouse is not accessible by the public. If it were, the directions would be: From Route 1, 38 km west of Saint John, take Exit 86 and follow Route 790 south for 10 km (6.3 miles). From 790, continue south for 5.1 km (3.2 miles) passing Point Lepreau Generating Station to arrive at Point Lepreau Lighthouse. James Hill was able to visit the lighthouse in 2019 and reports that visited may be arranged by calling the generating station's community affairs manager at (506) 659-6433.