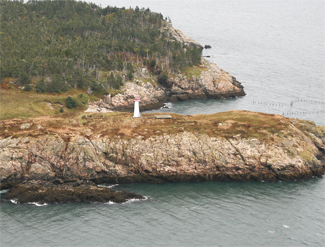 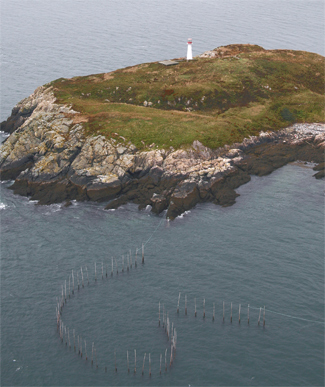 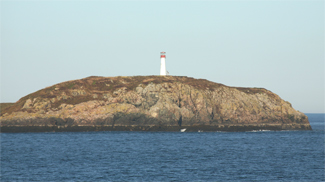 In 1853, thirty inhabitants of St. Andrews, including several mariners and pilots, submitted a petition to the House of Assembly of New Brunswick calling for the establishment of a lighthouse on White Horse Island, located off the northern tip of Campobello. The document was referred to the Committee of Lighthouses, which concluded that a light on Southern Wolf Island or the northern head of Grand Manan would be of greater benefit to the navigation of the Bay of Fundy than one on White Horse Island. The committee recommended that the Commissioners of Lighthouses in the Bay of Fundy procure a plan and estimate for a lighthouse on Southern Wolf Island and direct it to be built if the cost could be covered by the lighthouse fund. While visiting Saint John in 1853, Commander Shortland of the surveying steamer H.M.S. Columbia was requested by the Commissioners of Lighthouses to determine the most suitable spot for a lighthouse on The Wolves, a collection of five islands. Circumstances beyond his control apparently prevented the commander from carrying out the request, and no further action was taken on the matter until a few years after New Brunswick joined Canada, when in 1870, John Harley, Inspector of Lights in New Brunswick, recommended that a powerful revolving light on the southern one of the group of Wolves Islandswould prove of great service.

Southwest Wolf Island Lighthouse was constructed in 1871 on the southeast point of Southern Wolf Island, and its light was displayed for the first time on November 20th of that year by Keeper William Cline, who was paid an annual salary of $500. The revolving light had two faces, each containing three No. 1 circular burner lamps set in twenty-inch reflectors, and produced a white flash every ninety seconds. The lighthouse consisted of a square wooden keepers dwelling with a square tower rising from its roof. The lantern room had an inside diameter of nine-and-a-half feet and twelve sides, each of which supported a single pane of large plate-glass. The distance from the weather vane atop the lantern room to the ground was thirty-five feet, while the light had a focal plane of 111 feet above the high water mark. A tank in the cellar of the dwelling was used to store water, and a shed was built on the north side of the dwelling in 1874 to shelter the dwelling from cold northerly and westerly winds.

During the winter of 1873, the keeper reported that the machinery responsible for revolving the light worked irregularly or stopped completely. A machinist, dispatched from Saint John to investigate the matter, determined that the problem was oil on the wheels congealing due to the intense cold, and the issue was resolved by placing a small stove nearby.

In the fall of 1873, Keeper Snell decided of his own accord to build a breakwater and wharf on the western side of the island to afford a safe landing place. The keeper hired three men, whom he paid $1.50 per day, plus board, for a period of thirty-six days. When completed, the breakwater was twenty-five feet long, by twelve feet wide and eighteen feet deep, while the inshore wharf was eighty feet long, fifteen feet long where it joined the breakwater and ten feet wide at the shore. After having completed the work, Snell sent a letter to John H. Harding, the marine agent in Saint John, along with a bill for the labor and material. The following is an extract from that letter.

The marine agent recommended that the department reimburse Keeper Snell the $331 he had spent for material and labor, as the work had proved of great service and convenience to the department, but only $160 was offered him in 1878.

Southwest Wolf Island Lighthouse was apparently built by the government without first obtaining ownership of the land, as Alexander T. Paul sent the following letter, dated July 4, 1878 and addressed from the Sherrifs Office in St. Andrews, to Keeper Snell.

SIR, I am informed that you have been for several years using the Southern Wolf Island as if it belonged to you, by cutting the hay, and pasturing your cattle and sheep upon it. I never gave you any permission or authority so to do, and unless you make an arrangement without any delay, with my uncle Joshua Paul, who I have authorized to act for me in the matter, I shall take legal proceedings to recover from you damages as a trespasser upon my property, and that of my sister Mrs. Crosby, and shall also bring your conduct under the notice of the Minister of Marine and Fisheries. After arranging with my uncle for the time past, you will then have to take a lease of the part of the Island you may wish to occupy, on such terms as to the rent and payment of it, as you and he may agree upon.
My uncle's receipt for the amount which he and you may agree upon for the past, will be a sufficient release to you of all claim on my part, till the time you agree upon the amount.
Trusting you will attend to this without delay.

John H. Harding investigated the matter and found that the five Wolf Islands (Eastern Wolf Island, Green Rock, Spruce Island, Flat Wolf Island, and Southern Wolf Island) were granted to Caleb Paul by the New Brunswick government in 1798. Ownership then passed by title or heirship to Jacob Paul, then to James Paul, then to Joshua Paul, and finally to Alexander T. Paul. Joshua Paul agreed to sell the entire south island for $1,000 or the few acres surrounding the lighthouse for $250. Alternatively, the department could lease the whole island for $30 per year, provided they pay $150 in rent to cover the previous seven years.

The keeper was supplied a hand fog horn in 1900 to be used whenever he heard the fog signals of vessels in the vicinity. In 1905, a third-order lens, illuminated by petroleum vapour burned under an incandescent mantle, was installed in the lantern room to produce a bright, white flash every five seconds.

The original 1871 Southwest Wolf Island was replaced by a skeletal tower in 1962. The present fiberglass tower dates from 1982.

For a larger map of Southwest Wolf Island Lighthouse, click the lighthouse in the above map.

Southwest Wolf Island is accessible only by boat or helicopter. The lighthouse is visible at a distance from the Grand Manan ferry roughly halfway through the voyage.