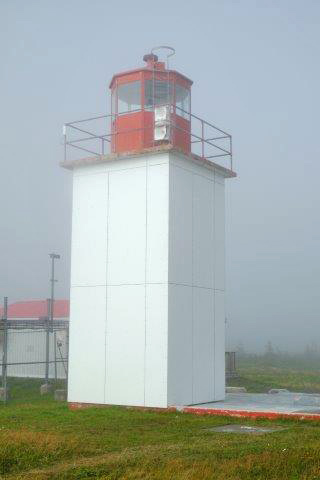 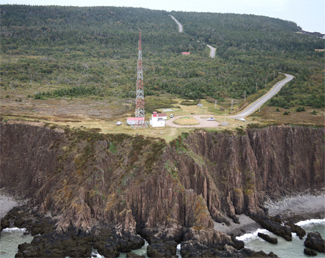 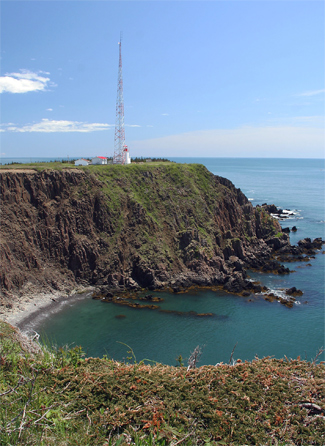 John H. Harding, agent of the Department of Marine for New Brunswick, visited Grand Manan in 1876 and reported that a lighthouse was needed on the islands southwest point to serve as a guide in approaching the island and to assist vessels passing up and down the North Channel of the Bay of Fundy. A contract for the lighthouse was awarded in 1878 to Angus W. Fisher, who sent his master builder, B. J. Austin, and seven workmen to the site.

The southern end of Grand Manan Island is known for its precipitous cliffs, and Southwest Head Lighthouse was built atop one of these known as Gull Cliff. The builders worked on the lighthouse during the fall of 1879 and incorrectly oriented the structure running east-west instead of north-south. This mistake placed a blank panel in the lantern room facing seaward instead of landward.

The first lighting, scheduled for January 1, 1880, had to be postponed while the whole lantern was taken apart in December and the blank section in the southeast portion of the lantern was exchanged with a glass section in the northeast section. The lighthouse, which consisted of a square, wooden tower, measuring forty-three feet from its base to the vane on its lantern, with an attached keepers dwelling, was finally placed in operation on February 1, 1880. The catoptric light in the lantern room made one revolution every two minutes, producing three white flashes and three red flashes with intervals of eclipse of ten seconds. With a lofty perch of over two hundred feet, the light could be seen in clear weather at a distance of twenty-four miles. The total cost for the lighthouse, including the lighting apparatus, came to $4,164.

Walter B. McLaughlin, who had previously served at exposed Gannet Rock for twenty-six years as head keeper and another eleven years as an assistant keeper, was appointed the first keeper of Southwest Head Lighthouse at an annual salary of $500. Keeper McLaughlin found the buildings badly constructed, in fact a perfect sham. The storms beat through in every direction, the shingles and clapboards were nothing better than refuse for lumber. The top of the tower was only covered with one thickness of cotton duck with one coat of paint. The rain and snow beat through both roof and walls...

Into this lighthouse, Keeper McLaughlin later wrote, I removed my large family during Christmas week, 1879, and ... spent the worst winter of my life. The living space had just one sleeping room in the first story and one room in the upper, half-story that was supposed to have been partitioned into three rooms. Keeper McLaughlin procured lumber and doors from Saint John to finish the upper story, and then during the rest of 1880 proceeded to build an addition to the dwelling and a large barn onto the eastern side of the lighthouse. He also cleared and drained the lighthouse lot and built a two-mile-road to connect the station with the highway road on Grand Manan. Keeper McLaughlin claimed he spent $2,820 of his own money for these improvements and even listed land and bonds he had sold to do so. Although he wrote several letters to the Department of Marine asking for reimbursement and even sent this photograph showing his additions to the lighthouse, Keeper McLaughlin was never compensated. Rather, the department replied, if a keeper leaves a station no allowance will be made him for any private buildings nor can he exercise any right of property over such.

During McLaughlins tenure at Southwest Head, the station was injured by a whirlwind in 1890, and the flagpole was damaged during a gale on January 26, 1895 and then destroyed the following year. A pump in the kitchen could be used to draw water through ninety feet of galvanized iron pipe that led to the stations well. A telephone was added to the station in 1897, using an old telegraph line. In 1900, a hand foghorn was provided so that the keeper could respond to the fog signals of vessels in the vicinity. After forty-eight years of service, Keeper McLaughlin retired at the age of seventy-two, and his son-in-law, Turner Ingalls, Jr., was appointed keeper in January of 1901.

Keeper Ingalls submitted his letter of resignation to the Department of Marine on June 17, 1907, asking that his last day be June 30, less than two weeks later. He was chided for giving such a short notice and was replaced by Clyde S. Ingersoll, a fisherman, on July 10th. Turner Ingalls asked $100 of Keeper Ingersoll for the stations barn that McLaughlin had built and willed to him. Keeper Ingersoll complied with the demand not wanting it to be removed from the station, but when he submitted a request for compensation, he was informed that he should have consulted with the department, as they already owned the barn.

The lighthouse tower had to be rebuilt in 1928 as it had become badly decayed. A new drain and septic tank were also installed at that time. Thirty years later, in 1959, a modern lighthouse was built adjacent to the old one, and when the work was complete, the old lighthouse was torn down. The new lighthouse is a single-story structure, built of cinder blocks, and has a square tower rising from one of its corners. Two new dwellings were built for the keepers while the new lighthouse was under construction, and a third dwelling was later added to the station. Ottawa Benson, who was keeper at Southwest Head during this transition, was the great-grandson of Walter McLaughlin, the first keeper.

During the night of February 26, 1963, Ottawa Benson and his wife Hildred heard a thump at their door. Upon opening, Hildred found a man covered with snow who stammered, Me and my brothers been blown ashore. I got up the bank, but hes still down there. Keeper Benson was dumbfounded. Others had wrecked at the base of the towering cliff before, but no one had ever managed to scale it.

Billy and Floyd Jones had left Haycock Harbor, Maine the previous morning in a leaky motorboat to gather periwinkles. Their engine failed just as a gale struck, and the two were blown out to sea. After twelve hours of bailing, vomiting, and praying, they ran aground below the blinking light at Southwest Head. The brothers managed to climb to a ledge above the pounding surf, but Floyd, numb with cold, could go no farther. Billy pressed on and managed to reach the lighthouse three hours later. A rescue party of seventeen men, including the bandy-legged Vernon Bagley, was soon summoned to the scene. The group consensus was to wait until morning as it would be murder to send anyone down the cliff in the dark, but Vern Bagley protested, knowing that Floyd could not survive the night down there.

With a nylon rope tied securely about his waist, Vern ventured over the edge of the cliff, but after a short distance, he lost his footing, took a spill, and was forced to clamber back to the top in defeat. Dejected and a bit embarrassed, Vern thought for a while then said, Yessir, I sure would!, and headed straight back to the edge of the cliff.

With renewed determination, Vern Bagley started down the bluff, and this time he succeeded in locating Floyd, whose clothes were stiff with ice. Wrapping Floyds arms around his waist and jamming them under the rope, Vern told Floyd to hang on and gave three sharp tugs on the rope to initiate the haul-up. Twenty-five feet from the top, Verns legs gave out, and he was forced to wedge the then unconscious Floyd behind a bolder and proceed to the top alone. Exhausted from the ninety-minute rescue, Vern collapsed in a snowbank. Assistant lightkeeper Sid Guptill used another rope to go after Floyd and returned a half hour later with the body.

The Jones brothers were wrapped in coats and rushed to the islands hospital where they quickly recovered from exposure. The next day, the brothers tearfully thanked Vern Bagley, who declared the pair to be toughern tripe. A year after the ordeal, a crowd of 300 packed the gym at the islands high school to see Vern Bagley receive the Carnegie Silver Medal for heroism. (Sid Guptill received a bronze medal.)

After the ceremony, Vern was asked about his strange announcement of Yessir, I would!, before he went over the cliff a second time. Wal, he replied, I'd been tellin' myself all the reasons why I couldn't go back over that cliff. But then this idea hit me so hard, Would you go if it was your own brother? that I answered out loud. Then I just had to go. Cause when you get right down to it, we're all suppose to be brothers.

The heroic story of Vern Bagley was recounted in the March 1968 edition of Readers Digest, and has even been turned into a song entitled Southern Head Rescue.

For several years, Southwest Head Lighthouse served as a fueling station and command center for the Coast Guard helicopter that ferried supplies out to Gannet Rock, but this ended after the automation of both lights. Southwest Head lost its final keeper with the retirement of Doug Daggett in October of 1987.

For a larger map of Southwest Head Lighthouse, click the lighthouse in the above map.