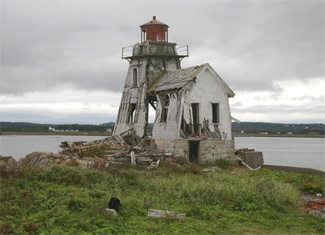 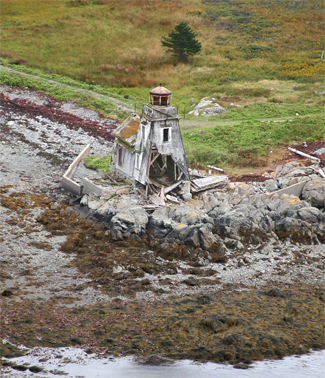 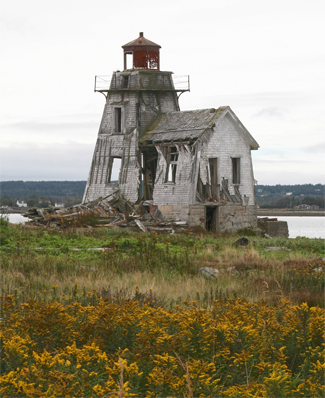 The first permanent settlement in the Grand Manan Archipelago took place on tiny Ross Island, which is connected to the larger Grand Manan Island at low tide. Moses Gerrish led a group of fifty United Empire Loyalist families to the land on the eastern side of Grand Harbour in 1784 and named it Ross Island, in honor of Thomas Ross, a fellow settler, who had been a mariner at Falmouth, Maine and entered the West Indies trade after arriving on Grand Manan. Mariners on Grand Manan Island petitioned the government for a lighthouse to mark the entrance to Grand Harbour, and in 1878 a contract for $1,050 was awarded to Messrs. H. H. Bowie & Co. of Saint John, who hired Charles and George Short, master shipbuilders from St. Andrews, to construct the lighthouse. Fish Fluke Point, located on the eastern side of Grand Harbour, was purchased from Isaac Newton for $150 as the site for the lighthouse, and work on the structure was pursued during the summer of 1879. Keeper Henry McLaughlin, who was transferred from Head Harbour Lighthouse, first exhibited the light at Grand Harbour on October 10th.

Grand Harbour Lighthouse consists of a square, wooden tower, thirty-two-feet-high, with an attached keepers dwelling. A fixed-white, catoptric light was originally shown at a focal plane of forty feet and could be seen in clear weather at a distance of eleven miles.

Keeper McLaughlin had a long history at lighthouses in the area, accepting his first assignment in 1843 to isolated Gannet Rock Lighthouse. He remained at that station for ten years and then served at Head Harbour before spending his final four years as a keeper at Grand Harbour. Henrys daughter, Hannah, married John A. Tucker at the lighthouse in 1881.

Mark Daggett was appointed the second keeper of Grand Harbour Lighthouse in 1883. In 1888 a reservoir was built in the cellar of the lighthouse to supply water for the keeper and his family. Sitting as it does on an exposed point, Grand Harbour Lighthouse was often damaged during heavy gales. $71.69 was expended in 1891 to replace protective work and repair the injuries the lighthouse sustained during a storm the previous winter. The following year, $55 was required to replace the abutment that had been carried away by the sea. A new sea wall was built in 1898.

Keeper Daggett had been serving for nearly fourteen years at the lighthouse when charges of political partisanship, failure to give proper attention to the station, and being absent from the station and unable to assist in a drowning situation were brought against him. Retaining ones job as a keeper was not easy, as the position was a political appointment and people often trumped up charges to obtain the position for themselves or their friends. Keeper Daggett emphatically denied the charges, calling them false from beginning to end. Since becoming keeper, Daggett said he had abstained from political conversations, even when he announced his intentions to vote for the Liberal ticket. The keeper referred to complimentary reports by the present and former inspectors to combat the charges of dereliction of duty, and for the final and most serious charge, Daggett noted that there was no foundation for it and pointed out that the person who signed the complaint was under a charge of felony.

To further prove his innocence, Keeper Daggett presented a petition signed by fifty-two members of the community certifying his strict attention to his duties as a light-keeper and as being a man who always minds his own business in all matters. Keeper Daggett retained his position, but a few years later he became gravely ill and passed away in February of 1900. His widow, Mary, petitioned for her son, Harry Mark, aged nineteen and who had been serving as an assistant to his father for four years, to be given the position of keeper at least until the family could pay off the large medical expenses incurred during the protracted illness of Keeper Daggett. It seems politics trumped charity, and Mary Daggett was given the customary gratuity of two months salary, and the position was awarded to Sidney Guptill later that year.

A hand foghorn was given to Keeper Guptill to be used whenever the fog signals of vessels in the vicinity were heard. After four years of service, Keeper Guptill resigned in 1904 and was replaced by Lloyd Charles Dakin. In 1912, J. A. Hartt, Member of Parliament, accused Keeper Dakin of attending a political meeting where he tried to annoy Mr. Hartt and remained afterward in an attempt to impress his views on some attendees. Keeper Dakin refuted the charges and claimed that Mr. Hartt had personally acknowledged that he had mistakenly identified Dakin as the man at the meeting. Still, Keeper Dakin was dismissed, receiving just three days to relocate his family and possessions, and Frederick J. Martin was appointed in his stead. A keeper could vote but was not allowed to practice political partisanship.

After a light was placed on Ingalls Head Breakwater, Grand Harbour Lighthouse was discontinued on August 1, 1963. A powerful storm on February 2, 1976, known as the Groundhog Day Gale, just happened to coincide with abnormally high tides caused by the Saros cycle. (The Saros cycle repeats every 18.03 years and has to do with the alignment of the sun, moon, and earth.) The high tides coupled with strong winds wreaked havoc on coastal communities in southern New Brunswick, and Grand Harbour Lighthouse received significant damage.

In May 1999, Lighthouse Digest declared the neglected Grand Harbour Lighthouse to be North Americas Most Endangered Lighthouse and launched a fundraising campaign through the American Lighthouse Foundation to save the structure. Errol Rainess, who lived in New York and purchased Ross Island, sight unseen, from a Maine lumber company in 1984, agreed to match any funds that could be raised in sixty days. $10,000 was reportedly collected through the effort, but after a check for that amount was sent to Rainess, he eluded further contact.

Rainess seems to be developing a reputation for not maintaining his properties as a 2009 article on Chelsea Now noted that over thirty-one complaints have been filed since 1997 against a now-abandoned six-story property Rainess owns on the corner of Seventh Avenue and 22nd Street in Manhattan. A coffee shop had been operating in the ground floor of the property but was forced to close in 2002 after Rainess doubled the rent. A couple of prospective tenants have tried to develop the property but gave up when dealing with Rainess proved too difficult. Rainess apparently spends most of his time in Belgium, returning to New York City only during the summer.

Manhattan authorities will likely take action against the absentee landlord and correct the violations that are a blight on an otherwise lovely neighborhood, but it appears there is little hope for Grand Harbour Lighthouse, which continues its gradual descent into total ruin. The demise of the lighthouse came on November 19, 2013, when it collapsed during a gale.

Not wanting to see this piece of the island's history totally disappear, the Grand Manan Museum obtained permission to salvage the lantern room, and on December 7, a team of eleven volunteers ventured out to the lighthouse and collected several small pieces of the lantern room and secured the largest piece so it could be extracted when the ground froze. We did exactly what we had to do today, said museum board member Greg McHone of the expedition. We tied off the big piece and got the smaller pieces out of the surf. ... We could reproduce enough to make a useful exhibit. The preliminary plan is to replicate the upper portion of the lighthouse in the wildflower meadow behind the museum.

For a larger map of Grand Harbour (Ross Island) Lighthouse, click the lighthouse in the above map.

(Note that the lighthouse no longer stands.) From Route 776 in the community of Maple Hill take Thoroughfare Road to its end and park. At low tide, nearby Ross Island is accessible by foot or with a 4x4 vehicle. There is a road of sorts leading across the marine floor onto the island. From the end of Thoroughfare Road, it is 2.4 km (1.5 miles) to the lighthouse. Note: Be sure and check the tide schedule CAREFULLY before attempting this trip. The tides in the Bay of Fundy rise very quickly so be prepared. The lighthouse can also be viewed from Ingalls Head Rd on the opposite side of Grand Harbour looking across to Fish Fluke Point.