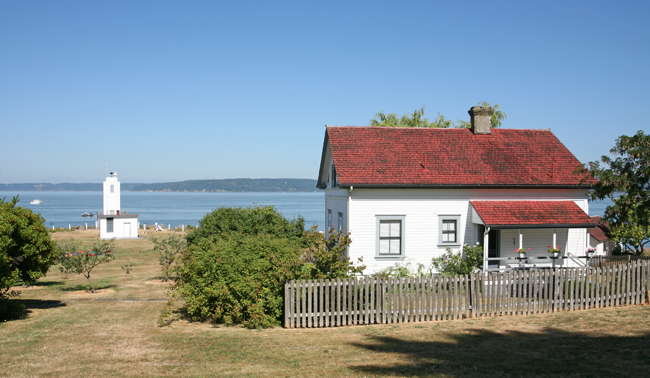 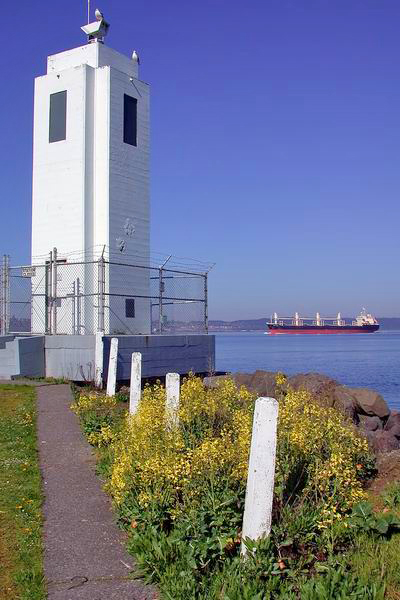 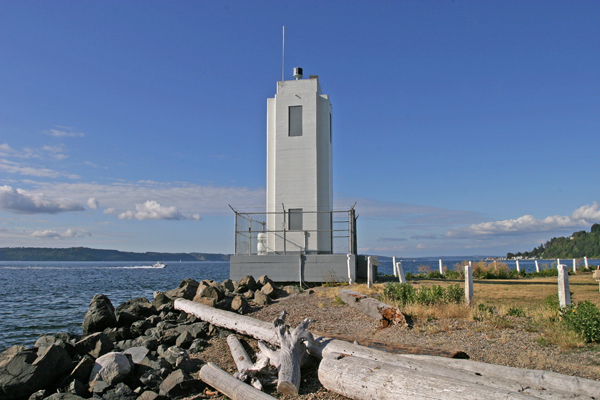 Browns Point is situated on the eastern side of the entrance to Commencement Bay, which leads south from Puget Sound to the busy Port of Tacoma. A lens lantern displayed from a post was established at the point on December 12, 1887, the same day a similar beacon first marked Point Robinson, six-and-a-half miles northwest of Browns Point.

Its presently hard to imagine, but at that time Browns Point was considered remote, and the point and the hills above were covered with timber. A contract keeper was hired to row to the point weekly to clean the glass, trim the wick, and refuel the tank. At the time, Browns Point was part of the Puyallup Indian Reservation, and the point was owned by an Indian named Joe Douette. Washington would become a state in 1889, two years after a light was established on Browns Point.

Fog posed a problem for shipping in the area during much of the year, and in 1895, the Lighthouse Board made the following funding request for a fog bell at Browns Point:

In addition to the stake light at this important turning point of the numerous water crafts plying between Tacoma and points down the sound a fog signal is urgently required. It is estimated that a bell struck by machinery could be erected, together with the necessary buildings, dwellings, etc., for about $6,000, and it is recommended that an appropriation of this amount be made therefor.

After repeated request, Congress finally allocated the requested sum on June 6, 1900. The price demanded for the additional land was deemed excessive, and condemnation proceedings resulted in $3,000 being paid to the owner of the property. Due to this unexpectedly high amount, another $3,200 had to be appropriated by Congress on June 28, 1902 before the project could commence.

Plans for the stations wooden bell/light tower and keepers dwelling were approved on September 22, 1902, allowing bids for their construction to be solicited. As the sole bid of $6,090 exceeded the funds on hand, the bidder submitted a modified proposal of $5,300, and a contract for this amount was entered into on March 5, 1903. The resulting two-story tower had a light attached midway up its western side, and a fog bell was suspended under its gable roof. Cast in 1855 by Bernard & Co. of Philadelphia, the bell was brought around the horn aboard the Shubrick, the first lighthouse tender to serve the Pacific Coast, and served at New Dungeness Spit from 1857 to 1873 and at Point No Point from 1880 to 1900 before being installed at Browns Point. The first lighting of the new tower occurred on October 26, 1903.

Oscar Brown, the stations first resident keeper, arrived at the point aboard the lighthouse tender Heather, accompanied by his wife Annie, a piano, other furnishings, and a horse and cow. The animals were lowered to the water by a sling and then swam ashore. Keeper Brown entered the Lighthouse Service in 1890, accepting a position as second assistant keeper at Cape Flattery. After three years there, Brown was transferred to New Dungeness Lighthouse where he was promoted to head keeper in 1896. From 1898 to 1903, Brown was in charge of Smith Island Lighthouse.

Brown was an accomplished musician, and, as the area around Browns Point was settled, he began giving piano and cornet lessons. Keeper Brown also planted an orchard populated with apple, pear, and cherry trees and maintained a flower garden featuring daffodils, tulips, peonies, and roses.

A boathouse was added to the station in 1905, and a galvanized-iron oil house was erected in 1907. The boathouse sheltered the stations rowboat, which Brown used to reach the tower when high tides covered the mud flat between the tower and the dwelling. (The swamp was filled in and the grounds graded in 1918, but the area is still prone to flooding.) Brown also rowed south to Tacoma periodically to pick up supplies and mail and to attend music concerts. The oil house originally stood near the tower, but was moved near the boathouse after the light was electrified in 1922.

Browns Point is said to be the point on Puget Sound with the longest periods of dense fog. When the fog settled around the point, Keeper Brown wouldnt get much rest as the striking mechanism for the 1,200-pound bell had to be wound every forty-five minutes. However, interrupted sleep was preferable to the times when the machinery failed. Then, Browns wife Annie would time the prescribed twenty-second intervals and signal her husband to strike the bell.

Keeper Brown kept a close watch on the waters near Browns Point and was quick to lend assistance to anyone in need of help. On September 8, 1917, he rescued three Japanese from drowning near the light station and furnished them dry clothing. Five years later, Oscar Brown towed a disabled fishing boat to a nearby wharf and then repaired its machinery so it could get underway again.

In 1933, the current thirty-four-foot, concrete, art-deco structure, which originally sported an enclosed lantern room and an electric foghorn, replaced the original wooden tower. No longer needed, the fog bell was given to the College of Puget Sound (todays University of Puget Sound), where it signaled the class hours. The bell was dedicated in a ceremony held during the colleges annual founders day ceremony on February 20, 1934. Superintendent Ralph Tinkham spoke on the Lighthouse Service at the event, and Keeper Brown gave a history of the bell.

In 1984, the bell was installed in the Fox Island Alliance Church, where it remained until July 25, 2000. On that date, the bell was returned to Browns Point, where it is housed in the old pump house. A bowling ball now serves as the clapper for ringing the bell.

A commemorative tablet was placed on the new, thirty-four-foot lighthouse on May 26, 1934 by the Browns Point Garden Club. The tablet bears the following inscription: This tablet in memory of May 26, 1792, when Capt. George Vancouver and his associates dined at this point. The superintendent and Keeper Brown were again called upon to make remarks on this occasion.

After thirty-six years at Browns Point, seventy-year-old Oscar Brown retired in 1939 when the Coast Guard assumed responsibility for the light. Could it be that Browns Point was named for the points long-time keeper? Im afraid not. Lieutenant Charles T. Wilkes, who surveyed Puget Sound in 1841, named it Point Harris, in honor of a sailmakers mate on his vessel. When Lieutenant Ambrose Wyckoff was making a hydrographic survey of Commencement Bay in 1877, he labeled the point on his charts as Point Brown, a name locals used to honor an early settler. This name stuck, though it was later officially changed to Browns Point. When asked if the point was named after him, Keeper Smith replied, Being named Brown didnt have anything to do with my coming hereWhy, at Smith Island, they used to call me Smith.

Browns Point Lighthouse only had a handful of keepers. Arthur Woods served during the early 1940s and Cyril Beaulieu watched over the light in the late 1940s and early 1950s. Light keeping at Browns Point officially ended in 1963 when the light was automated and Keeper Bob Deason was transferred elsewhere. After automation of the light, the diaphragm foghorn was activated via a telephone call from Foss Launch and Tug Company.

A year after automation, Browns Point was converted to a public park, which has a large grassy area ideal for a picnic. The keepers dwelling was rented as a private residence from 1964 to 2000, when Points Northeast Historical Society restored the dwelling and furnished it with period pieces. The keepers dwelling is currently available for weekly rentals by modern day lighthouse keepers, who are required to conduct tours and perform daily, light chores.

After three years of planning and three months of fundraising, restoration of Browns Point Lighthouse began in July 2021. The work included replicating historic windows, a door, a foghorn, the entrance stairs, and the lantern. Specialty Metals provided the replica windows and door at a fraction of the original bid and donated the replica lantern, which had been absent from the tower for years. An architectural ledge around the base of the lantern, which is part of the towers art deco design and which had been filled in years ago to accommodate a protective chain-link fence, will also be restored to its original appearance.

A grand rededication community celebration was held on Sunday, October 17. The festivities mirrored those held in 1933 when Keeper Oscar Brown dedicated the lighthouse and included a marching band and a ribbon cutting ceremony. The restoration cost $150,000, and the final step was having the Coast Guard place an LED lamp inside the lantern and remove the temporary lighted buoy that had guided vessels around the point during the restoration.

The restored keepers cottage houses a small history museum, while a replica surfboat and historic maritime items are exhibited in the boathouse.

For a larger map of Browns Point Lighthouse, click the lighthouse in the above map.

From I-5 east of Tacoma, take Exit 136 and go north on Port of Tacoma Road. Turn right onto Highway 509 and continue for seven miles. Turn left on Le Lou Wa Pl and continue on Tok A Lou Avenue to the lighthouse.

The surrounding park is open from dawn to dusk. Tours of the keeper's dwelling and other structures are given on Saturdays between 1 and 4 p.m. from April through September. Call (253) 927-2536 for more information. The keeper's dwelling is available for weekly rentals.

The lighthouse is owned by the Coast Guard . Grounds open, dwelling open during tours, tower closed.