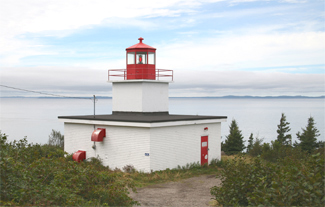 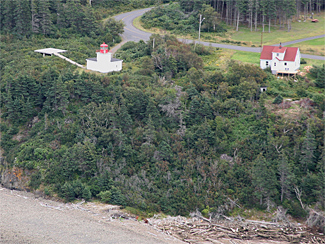 On May 1, 1874, the following Notice to Mariners was issued:

Notice is hereby given, that a steam fog-whistle has been erected on the north-west head of Grand Manan, in the Bay of Fundy  latitude 44 47 9 N., longitude 66 45 7 W.
The whistle is erected on the extreme north-west head of the island, and is elevated 80 feet above high water. In thick weather, fogs and snowstorms, it will be sounded, so as to give three blasts of four seconds duration in each minute, with an interval of sixteen seconds between each blast.

$8,318.43 was spent in constructing the steam fog whistle, whose activation was delayed due to the destruction by fire of the Allan Brothers foundry in Carleton. The firm received an extension, and the fog signal, which could frequently be heard in Eastport, finally commenced operation on July 1, 1874.

James Tatton, who owned the land on which the fog alarm was built, was appointed the stations first engineer at an annual salary of $700. In 1857, this same James Tatton, led by his dog, found the body of James Lawson in his barn. Lawson had survived the wreck of the Lord Ashburton, scaled a cliff face, and stumbled a mile to Long Eddy before collapsing in the barn. After discovering Lawson, Tatton initiated the search that saved seven other crewmen.

Supplies for the station were delivered by steamer to a wharf that was connected to the station by a good wagon road with an easy grade. Both the wharf and wagon road were built by Tatton, who lived in a dwelling on the property. In 1875, the Department of Marine annual report noted, An addition to Mr. Tatton's, the keeper's dwelling-house, is very much needed, to accommodate the assistant engineer's family. The house was only built for one small family, and there are now two families living in it. Were it not that the assistant is a son of Mr. Tatton it might be impossible for the two families to get along together. The assistant has a wife and two children. A lean-to shed was soon added to the south side of the dwelling to house the assistant keeper and his family.

The fog alarm building was built on a terrace, halfway up the cliff, and was situated above water tanks that were necessary to run the steam engine. Long Eddys steam whistle was quickly nicknamed The Whistle. A covered passageway connected the fog alarm building to a nearby coal shed, which was fed by an eighty-foot-long wooden chute that reached the top of the hill.

In 1893 an abutment, sixty feet long, fifteen-and-a-half feet tall, and sixteen feet wide on top was built to protect the fog alarm building from debris falling from the cliff. That same year 125 tons of coal were landed at the station. A new abutment was built on the southeast side of the fog alarm in 1897 using 108 logs that varied in length from ten to thirty-five feet. The stations boiler was replaced in 1899 with a larger one removed from Point Lepreau.

After thirty years of use, the original fog alarm building required extensive repairs, and the Marine Department opted to build a new structure on the beach at the foot of the cliff, from where the sound could be better directed seaward. The new rectangular, wooden building stood sixteen feet above the high water mark and was painted white with a red roof. The fog horn projected from the buildings northern face and was put into operation on January 15, 1905. This 1954 photograph gives a different perspective on the beach-based fog alarm.

The fog alarm building was built at a cost of $3,235 by day labour under the superintendence of R. Summers. The Canadian Fog Signal Company supplied the fog alarm plant consisting of a diaphone operated by air compressed by oil engines. The new signal initially sounded one 3.5-second blast every minute but was altered the following year to produce two 2.5-second blasts each minute.

A new keepers dwelling was constructed at Long Eddy in 1948 at a cost of $13,627. After Long Eddy had been operating as just a fog alarm station for nearly a century, a combination lighthouse and fog alarm building was built atop the bluff at the northern end of the island in 1966. A red flashing light is displayed from the square tower that rises from the corner of the one-story, concrete fog alarm building.

A keeper's dwelling remains standing near the lighthouse. This location is a favorite with locals and visitors alike for its spectacular sunset views.

Long Eddy Point Lighthouse was designated a heritage lighthouses under the Heritage Lighthouse Protection Act in 2017.

For a larger map of Long Eddy Point Lighthouse, click the lighthouse in the above map.

North Head on Grand Manan Island can be reached by car ferry from Blacks Harbour, New Brunswick. From the ferry landing in North Head, drive straight, and then take your first left and continue 1.5 km (0.9 miles) to Route 776. Turn right onto Route 776 (Whistle Road) and continue for 5 km (3.0 miles) to the lighthouse.