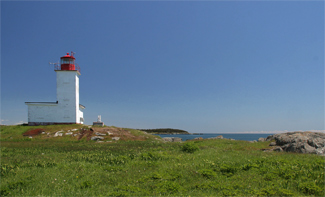 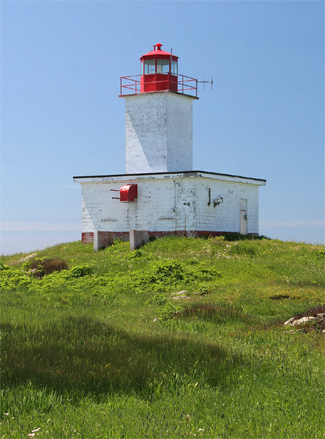 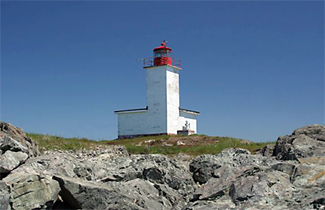 With a population of roughly 200, White Head Island is the only other inhabited island in the Grand Manan Archipelago besides Grand Manan Island. Samuel de Champlain sought shelter at White Head Island during a storm in October of 1606, but permanent settlers would not arrive for two hundred more years. Another famous visitor to the island was John James Audubon, who chartered the American Revenue Cutter Swiftsure from Eastport in 1833 to take him to Labrador. Shortly after embarking on this journey, he landed at Gull Cove on White Head Island to view the herring gulls. Audubon recorded the following account of his visit to Gull Cove in his Birds of America.

I was greatly surprised to see the nests placed on the bushes, some near the top, others about the middle, or on the lower part of the trees, while at the same time, there were many on the ground. It is true I had been informed of this by our captain; but I had almost believed that on arriving at the spot I should find the birds not to be gulls. My doubts however were now dispelled, and I was delighted to see how strangely nature provided them with the means of securing their eggs and young from their arch-enemy, man. My delight was greatly increased, on being afterwards informed by Mr. Frankland, that the strange habit in question, had been acquired by these gulls within his recollection, for, said he  When I first came here, many years ago, they all built their nests on the moss, and in open ground; but as my sons and the fishermen collected most of their eggs, and sadly annoyed the poor things, the old ones gradually began to put their nests on the trees, in the thickest part of the wood's.

A light, consisting of a lantern with a pressed glass lens that was hoisted on a thirty-five-foot-tall mast, was established at Gull Cove on December 30, 1902 to serve as a guide for fishing boats. The mast stood 600 feet back from the shore near the home of Lewis Frankland, who tended the light. With a focal plane of ninety feet, the light was visible for six miles from all points of approach by water.

In 1910, the pole light was replaced by a square, pyramidal, forty-nine-foot wooden tower built under contract by Edward Rourke of Saint John for $1,220. This light was also fixed white and employed a fourth-order dioptric lens. Lewis Frankland kept the light until 1923. Other keepers included Chester Russell and Harry Mourik. Gull Cove Lighthouse was discontinued in 1981, relocated to private property, and later torn down.

A petition from 330 residents of Grand Manan and Nova Scotia, calling for the establishment of a fog alarm at Long Point, the southernmost point of White Head Island, was sent to the Department of Marine in October of 1927. At that time, roughly 100 fishing boats operated off White Head Island, with another twenty-five boats from Nova Scotia joining them in the fall. In September of 1928, tenders were invited for the construction of a combined dwelling and fog alarm building on Long Point. Three quotations were received for the work, but before a contract was signed, the district engineer pointed out that this configuration was not acceptable. To provide proper ventilation, windows and doors had to be kept open, and this would not be possible during the cold of winter. The department had recently learned this lesson when a keeper was nearly asphyxiated by fumes. Besides, a vibrating and noisy fog alarm didnt make for the best housemate.

New tenders were invited in March of 1929 for the construction of three separate structures: a fog alarm building, a dwelling, and a boathouse at Long Point. Five bids were submitted for the work, and the lowest bid of $7,489, made by G. Stephen Whitehead of Saint John, was accepted. This bid was $2,496 lower than the nearest bid, while the highest bid was $13,500. The department had projected the cost would be $7,590, which included a profit of 15% for the contractor. Articles of Agreement, stipulating that the work be completed by June 11th, were signed on April 22, 1929.

Floyd Franklin was hired as inspector for the project, receiving 4% of the contract price for his services, and $2,100 was allocated for the purchase and installation of the fog alarm machinery. After the district engineer inspected the plans, he recommended that the cistern below the fog alarm building be divided into two parts, so that if contaminated by seawater one part could be drained and cleaned without interrupting the fog alarm. Mr. Whitehead was allowed an extra $74 for this work.

The fog signal equipment supplied to the station consisted of two three-horse-power engine/compressor units, furnished by the Fairbanks Morse Company, air and oil tanks, and a diaphone. The resulting diaphone fog alarm, when excited by air compressed by the oil engines, sounded three blasts of three seconds duration every minute.

Arthur Wilson was the first keeper assigned to Long Point and remained at the station until 1958.

A combination lighthouse and fog alarm building was built at Long Point in 1966 in the form of a one-story cement structure with a square tower rising from one of its corners. Shortly thereafter, the whistle house was torn down and the old keeper's dwelling was burned. Subsequent keepers, who were all from the island, had to provide their own accommodations.

Today, a white light, with a flashing pattern of six seconds on followed by six seconds off, is shown from the lantern room, while the fog alarm gives a two-second blast every twenty seconds when needed.

To reach White Head Island, take the free 30-minute car ferry from Ingalls Head on Grand Manan. Once on White Head Island, make a right turn, proceed 0.5 km (0.3 miles), and then make a left onto Long Point Road. Travel another 0.5 km (0.3 miles) and then park and walk 1 km (0.65 miles) to the lighthouse, or with a four-wheel-drive vehicle you can drive the last portion.