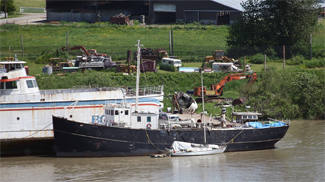 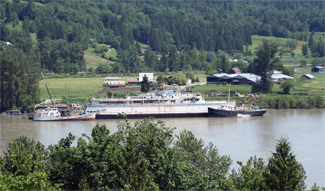 The Burlee Drydock Company built LV 76 at Port Richmond on Long Island in 1904 for a contract price of $83,076. The lightship was delivered to the lighthouse depot on Staten Island on May 26 of that year, and her seaworthiness was tested by delivering rations to various light stations around Long Island.

On February 14, 1905, LV 76 left New York bound for San Francisco in company with LV 83. LV 76 was to serve as the west coast Relief lightship, while LV 83 was assigned to be the first lightship at Blunts Reef off the northern coast of California. In 1905, the only other west coast lightship stations besides Blunts Reef were Columbia River, San Francisco, and Umatilla. The fifth and final west coast station was Swiftsure, which was established in 1909.

After a layover in San Francisco, LV 76 continued northward to Astoria, Oregon, and then relieved the Umatilla Reef Lightship (LV 67), positioned off the Washington coast, from July 17, 1905 to November 2, 1906. A month later, LV 76 sailed from Astoria to San Francisco, and then served at the San Francisco Station from January 2, 1907 to February 11, 1907, relieving LV 70. During this period, a barkentine struck LV 76 causing much damage to its hull. After repairs in San Francisco, LV 76 was back on the San Francisco Station during March and April of 1907. In July of that year, she left for Astoria to serve again as relief for the Umatilla Reef Station.

Except for an extended period during World War II when she served as an examination and training vessel at Alameda, California, LV 76 would repeat this pattern of relieving other lightships on the West Coast until she was decommissioned in 1960.

Wayne McMorran served aboard LV 76 from 1954 to 1956 and remembers how the vessels teak decks and wooden deckhouses made him think he was serving on a very historic lightship. He learned the exact age of the lightship when he found its original bell in the bow of the ship marked in raised lettering with 1904 and 'U.S.L.H.E. After overcoming seasickness during his first week of duty, McMorran discovered that the food aboard the lightship was actually quite good, thanks to bonus rations due to the crews isolated duty and some fine cooks.

McMorran was assigned to be part of the black gang, which worked on the ships steam engine and other equipment. He recalls that sleeping was one of the few activities there were to take up ones time. If the weather was real rough, you might have to sleep with your feet jammed between the springs and the bed-frame and holding on with ones hands. If it was foggy, you had to sleep with the diaphones blasting directly overhead. It could be done  with practice.

LV 76 was decommissioned on September 16, 1960. Plans to use the lightship as a museum piece in Seattle failed, and the vessel was sold on October 9th, 1961 to a Mr. A. Jensen. The lightship was renamed Ark, and in 1963 had its main engine changed to diesel. The vessel was subsequently purchased by the Belche family of Seattle and named Claire Anne. In 1978, ownership of LV 76 was transferred to Rivtow Straights Ltd. of Vancouver, B. C. and the ship was relocated to the Fraser River. Victor Kent Staudinger, Michael J. Wilson, and William T. Bonniman purchased the lightship on October 22nd, 1980. By this time, the lightship was in disrepair, but Staudinger lived aboard the vessel. In 1985, the generator, diesel engine and compressor were all rebuilt, and on November 28th 1985, the Claire Anne was accepted at the Canadian Registry as a barge.

Unknown to the lightship community for several years, the whereabouts of LV76 was discovered by Jim Gill, a past president of the USCG Lightship Sailors Association. Just a few hours before Gill passed away on February 10, 2003, he emailed the results of his multi-year search for LV 76 to Richard A. Bennett, secretary of the association. Several weeks later, Bennett received files and messages taken from Gills computer after his passing, and amongst these was an email from the Maritime Museum Library in Vancouver, B. C., dated February 27, 2003, that provided the location of the vessel.

In 2005, Staudinger was still living aboard the lightship, which was then called the Maudi Morgan and was moored on the North Arm of the Fraser River.

LV 76 was sold to a new owner in the summer of 2007, and in August of 2008, the lightship was moved about forty miles up the Fraser River to a location just west of Mission shared by two decrepit ferries: the Queen of Sidney and SS San Mateo. By the spring of 2012, Michael Montgomery, the lightship's owner, moved the vessel a few hundred metres downstream.

On March 24, 2017, the former lightship sank at its dock, creating a sheen on the river. It is likely that the vessel will be scrapped rather than refloated.

For a larger map of Lightship Relief LV 76 / WAL 504 Lighthouse, click the lighthouse in the above map.

(Note that the lightship sank in early 2017). To reach the bank of the Fraser River where the lightship was moored in 2012, exit from Highway 7 near the gas station at 29684 Lougheed Highway onto McLean Street and drive a short distance down to the river. It was reported in 2012 that the owner, who lives on the lightship, welcomes visitors. Pictures are also possible from River Road on the opposite side of the river.