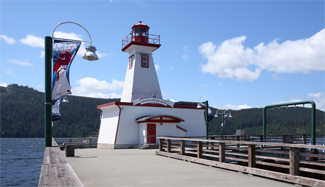 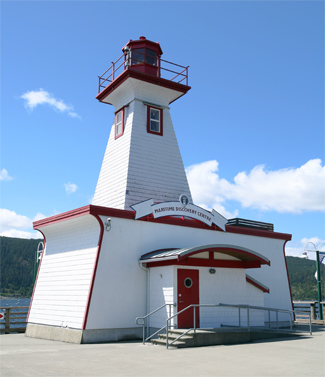 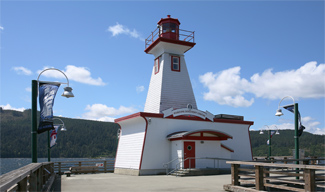 The Port Alberni Lighthouse is part new, part old. The square, pyramidal tower is new, constructed in the 1990s by the Port Alberni Maritime Heritage Society using generic plans. The lantern, however, is historic, having been removed from Chrome Island on the East Coast of Vancouver Island when the Coast Guard modernized the light there. The Port Alberni Lighthouse is equipped with a beacon, which is turned on during the summer season, though it can't be left on at night because it disturbs the neighbors.

Chrome Island Lighthouse was established in 1891 at the eastern entrance to Baynes Sound, just off the southern tip of Denman Island. The first light there was situated atop the keepers dwelling, but was later replaced by a wooden tower and then in 1922 by a skeletal tower with an enclosed lantern room. The present concrete tower on Chrome Island was erected in 1989, and the lantern from the decommissioned skeletal tower was donated to the Port Alberni Maritime Heritage Society.

The Port Alberni Lighthouse contains displays on the lighthouses of British Columbia and their keepers along with a variety of other material relating to local maritime history. The story of the heroine Minnie Patterson of Cape Beale Lighthouse is told in the lighthouse, and in 2011 an engraved silver tray awarded to her by the Government of Canada and a teapot sent to her by the officers and crew of the coastal steamer SS Queen City were on display at the lighthouse.

For a larger map of Port Alberni Lighthouse, click the lighthouse in the above map.

The lighthouse is known as Port Alberni's Maritime Discovery Centre and houses a museum on local maritime history.