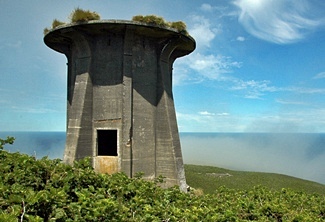 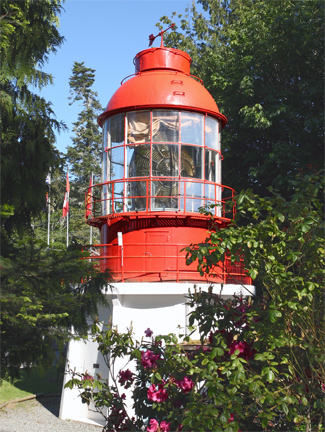 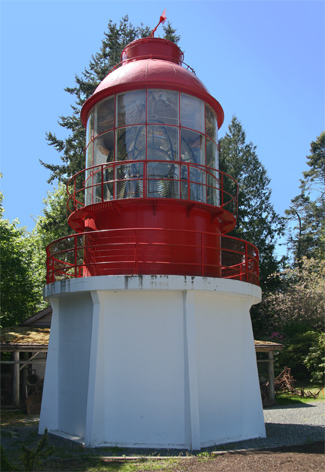 Triangle Island, named on account of the jagged reefs that surround it in a three-sided geometric form, is a cone-shaped rock, jutting out of the water like a mountain crag pushed up from the depths of the Pacific. Situated at the southern side of the entrance to Queen Charlotte Sound, twenty-nine miles offshore from the northwest tip of Vancouver Island, Triangle Island seemed like a natural place for a lighthouse, and in 1909 a roadway was blasted from the shore to the islands lofty peak, where a reinforced concrete lighthouse and a wireless telegraph station were built over the course of the next year. The forty-six-foot tower was surmounted by a circular lantern room that housed a powerful first-order Fresnel lens. When H.C. McKilleeen, a surveyor for the marine department, returned to Victoria after selecting the site for the lighthouse, he confidently reported:

We laid out the site at the summit of Triangle Island 650 feet above the sea, for a powerful first order light, which will ultimately develop into one of the most important of all lighthouses on this coast and with the expected great development of steamship traffic on the Pacific will become a leading light which will be first picked up by the steamship captains and will given them their bearings whether they are bound to Puget Sound or Prince Rupert. I have not worked out the distance at which the light will be visible but it will be seen for fifty miles at least.

Perched atop the slopes of Triangle Island, the keepers and wireless operators had little protection from the nearly constant winds blowing off the Pacific Ocean. An article in The Daily Colonist described conditions when hurricane force winds, not an uncommon occurrence at the station, struck the summit in 1912:

Even though lifelines were stretched from house to house the lightkeepers assistant was blown down and sustained a badly sprained ankle. Buildings teetered back and forth upon their foundations and threatened at any minute to roll over and cascade into the raging sea 680 feet below. Those in the houses were seasick form the motion. Glass appeared to bulge inwards with the terrific force. The biting wind forced its way through walls and prevented any fires being lighted. The strength of two men was required to push each door open. Men whose duties took them outside even had extreme difficult in crawling from on building to another flat upon their stomachs.

Six brick and iron chimneys were sheared off as if by some giant knife. A heavily built shed next to the lighthouse left its moorings, rolled end over end, and tumbled into the furious sea like a paper bag in a breeze. The ensuing hours were harrowing on the lofty rocks. It seemed at any moment their doom was an assured thing. All they could do was to pray and shout words of encouragement to each other above the storms thunderous roar.

After two-and-a-half years at the station, Keeper Davies begged to be transferred to more congenial surroundings. Triangle is very hard on our nerves and a great strain on our constitutions, he wrote the marine agent. The two-year-old dwelling was already unfit for habitation, according to Davies, and it was an utter impossibility to keep a fire, as the residence got smoked out, forcing them to go up to a week at a stretch without a warm meal. Davies request was granted, and Thomas Watkins arrived to replace him.

On October 29, 1918, the Galiano made an emergency supply stop at Triangle Island where the gasoline reserve needed to run the generators was running dangerously low. Sid Elliot, one of the radio operators, was supposed to be relieved, but he received the unwelcome news that his sentence at the lonely outpost had been extended. Jack Neary, the other operator, fared better, as he got to see his brother, who was serving as a radio operator aboard the Galiano.

After supplies had been disgorged onto the beach from the Galiano, Miss Brunton, who had been serving as a housekeeper and cook for the six bachelors that manned the wireless, was shuttled out to the Galiano, and the islands residents were left to haul the supplies up the steep tramway.

The Galiano had to fight days of 110 knot winds and forty-five-foot seas to reach the station, but rather than wait out the storm in a sheltered bay, she headed out into unprotected waters. Ten hours after her departure, the radio operators at Triangle Island, picked up her final transmission: HOLD FULL OF WATER. SEND HELP. A search and rescue was launched at daylight and soon located the body of one crewmember wrapped in a life jacket and an engine room skylight, strong evidence of the vessels fate. A memorial to the thirty-nine crewmembers and one female passenger lost at sea can be visited at the Ross Bay Cemetery in Victoria.

In 1919, the Department of Marine finally acknowledged its folly. The lightkeepers were removed from Triangle Island, and the towers lantern room and lens were dismantled. The radio station, unimpaired by the fog, lasted two more years, but its operators were finally freed from the inhospitable summit in 1921, and the seabirds once again had free reign over Triangle Island.

In early 2004, the Sooke Region Historical Society approached the Canadian Coast guard about acquiring the lantern room from Triangle Island and the first-order Fresnel lens from Estevan Point Lighthouse. The Coast Guard agreed to donate the items, and that August the lantern room was trucked to Sooke from the Coast Guard base in Victoria. The lens followed in March of 2005, and on June 26, 2005, a short concrete tower, topped by the massive lantern and lens, was dedicated on the grounds of the Sooke Region Museum.

For a larger map of Triangle Island Lighthouse, click the lighthouse in the above map.

From downtown Victoria, take Highway 1 west for 12.3 km (7.7 miles), and then take Exit 14 and proceed south on Highway 14 (Veterans Memorial Highway) for 3.4 km (2.1 miles). From Veterans Memorial Highway, turn right onto Sooke Road (also Highway 14) and drive west for 20.4 km (12.8 miles), and you will see the lighthouse on your right at the intersection of Sooke Road and Phillips Road. Please note that a curtain is drawn around the lens outside of museum hours and that it is necessary to call Sooke Region Museum in advance if you would like to go inside the tower.