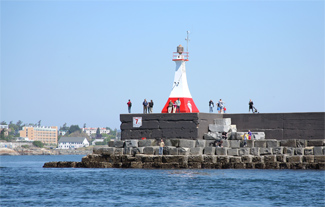 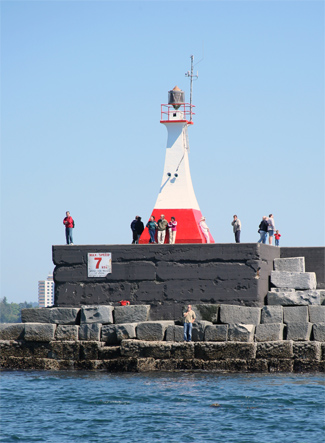 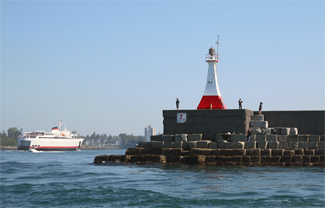 A 1914-1915 appropriation of $1,100,000 provided the initial funding for the construction by the Department of Public Works of the breakwater and two concrete piers at Ogden Point. The rubble mound breakwater has a length of 2,500 feet and is capped with granite blocks and a concrete superstructure. The two concrete piers were originally about 800 feet long and 250 feet wide, with a clearance between them of 300 feet.

Ogden Point was named after Peter Skene Ogden (1793  1854), a fur trader and explorer employed by the Hudson Bay Company. Roughly 10,000 granite blocks, weighing together over a million tons, were quarried at Hardy Island and shipped to Victoria for use in the breakwater. Completed in 1916, Ogden Point Breakwater was marked the following year by a square, white pyramidal concrete tower that displayed an occulting white light at a height of forty feet above high water. Messrs. Parfitt Brothers erected the tower at a contract price of $1,655, and an unwatched acetylene beacon originally provided the light.

An electrically operated fog alarm was installed on the breakwater in 1919, and in 1926 a cable was laid to supply the needed electricity from shore.

Over the years, the piers at Ogden Point, which were serviced by railway at one time, have been home to a grain terminal, a fish processing and cold storage plant, and a ferry terminal. Various lumber companies also shipped their goods from the piers. Today, a heliport and horse-drawn carriages operate from the piers, but the most visible customers are the mammoth cruise ships that regularly call at the port during the summer months. Cruise ships log over 200 visits to Ogden Point each year, bringing over 400,000 visitors to picturesque Victoria.

For a larger map of Ogden Point Breakwater Lighthouse, click the lighthouse in the above map.

Take Highway 1 (Douglas Street) to downtown Victoria and continue past the harbor area until Douglas Street ends. Turn right onto Dallas Road and drive 1.4 km (0.9 miles) where you will see the cruise ship terminal and where you can park and walk the breakwater out to the light.