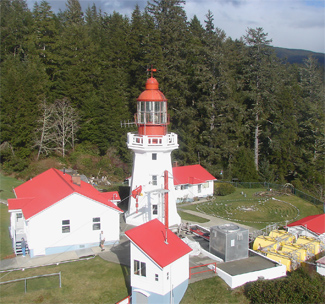 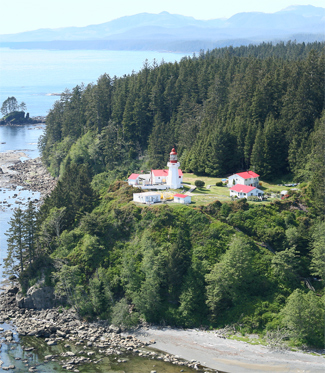 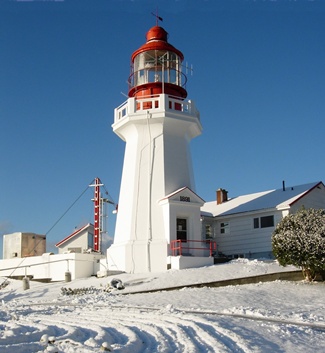 On January 11, 1896, Phil Daykin, the lightkeeper at Carmanah Point, gathered a few supplies and set out along the old telegraph trail, a trek he had taken countless times. The day before, the tug Tyee had signaled that it had rescued thirteen survivors of the shipwrecked Janet Cowan and that there might be others stranded somewhere between Pachena Bay and Carmanah Point.

Tree after tree lay across the trail, brought down by recent winter gales which had also dismantled the telegraph line, breaking Daykins link with Cape Beale and Victoria. He found them, nine of the ships crew, huddled in an abandoned cabin, and brought them back to Carmanah, where he and his family sheltered and fed them until they were picked up by the Princess Louise.

Looking for wreckage and victims was a part of daily life for the Daykins, hunkered down on a corner of the Pacific Graveyard.

Sand and gravel are rare along the coast between Cape Beale and Carmanah Point, the sea breaking directly against the cliffs. The Seattle Times reported in 1908, Wreckage is piled high on every beach and in every cove, mostly so battered and splintered, so worn and polished that its origin and former shape cannot be distinguished. But imbedded in the most of it are bolts and spikes, bars and nails, eaten with rust, betokening that once it was part of some gallant ship. The outlying reefs hold in crevice and fissure fathoms of rusty cable. Nearly every point, reef and beach of that disastrous coast bears the name or tradition of some wreck. Many of them unknown and unrecorded.

Captain George Richards, surveying the Vancouver Island coast aboard the HMS Plumper on October 23, 1858, recommended that a lighthouse be built on Point Bonilla to mark the northern entrance to the Strait of Juan de Fuca and serve as a landfall light for vessels arriving from China and Japan. A lighthouse at Cape Flattery, marking the southern entrance in the United States, had been built the previous year, and with a pair of lights bracketing the strait, it would not be overshot. Thirty years and countless shipwrecks later the political muscle of the Canadian Pacific Railway (CPR) finally brought that recommendation to fruition.

In August 1887, W.C. Van Horn of the CPR, wrote George Foster, minister of Marine and Fisheries, complaining that the SS Port Augusta inbound from Yokohama, Japan had wasted two days waiting for the fog to clear before it could find its way into the Strait. Foster immediately responded, and approval was given to build a lighthouse and fog signal at Point Bonilla.

Manuel Quimper, in 1790, gave the name Bonilla, meaning high and bold, to the current Carmanah Point, but in 1846, the Admiralty surveyors misapplied the name to the next point eastward, which is a lowland with shallow waters extending some distance seaward. Confusion over the point would come once again, when construction of the lighthouse began in 1890 under a contract let to George H. Frost of Nanaimo.

Building supplies were offloaded during a period of heavy fog and hand carried up the steep cliffs. When the fog cleared, the crew found, much to their dismay that they were standing on Carmanah Point looking out at Point Bonilla, which lay two miles to the east. Rather than go to all the trouble of moving the supplies, they elected instead to build the lighthouse right where they were.

When the rainy season set in with its westerly gales, landing additional materials became nearly impossible, and the work ceased until the following year. The original Carmanah Point Lighthouse was a forty-six foot tower with an attached dwelling, both painted white with the lantern surmounting the tower painted red. A fog alarm building was also constructed at the site, immediately seaward of and a little lower than the tower. The total expenditure for the building of the station was $15,220.89.

The light, which was 173 feet above high water and visible for nineteen miles, was first lit on September 15, 1891 by William Phillip Daykin, and it had a distinctive signature of three white flashes each minute.

In addition to its navigational aids, Carmanah Point also served as a traffic control center. Flags were first used to communicate with offshore vessels, and then in 1896, a steam whistle, separate from the fog alarm, was established so messages could be exchanged via Morse code even in foggy conditions. Using the stations telegraph, the lightkeeper could then relay important messages and notifications of ship arrivals to Victoria.

Due to heavy winter storms, the telegraph line was often down, a sticking point with Daykin. The Victoria Daily Colonist reported on Thursday, January 13, 1898:

Mr. Daykin, the Carmanah Point lightkeeper, has lost faith in the telegraph services. The wire has been down for 21 days and although there are good prospects of it soon going up again in view of the linemen working industriously, Mr. Daykin has decided to no longer place entire dependence on it. When he returns home he will take with him a number of carrier pigeons belonging to Mr. W. McKeon, which when he gets any news of importance at a time of disabled telegraph line he will home for Victoria. It is thought in time of shipwreck the usefulness of this scheme will be demonstrated.

Daykin, who was known for using expletives freely and downing a bottle of Scotch whiskey each day, began his assignment at Carmanah Point on April 17, 1891, bringing with him his wife, five sons, and invalid mother. His time on Carmanah was peppered not only with witnessing firsthand the tragedy of shipwrecks but also his own personal grief brought on by living in a harsh land. By the time he left Carmanah, twenty-one years and two months later, he had lost his wife to complications from surgery, two of his sons, his oldest, Ted, who never returned from a hunting trip, and William, who fell from the tramway car to the rocks below while hauling supplies from the tender, his mother, who died in 1906, and his own health from crippling arthritis and mercury poisoning.

After begging for a reassignment for nearly ten years, Daykin was finally transferred in 1912 to MacLaughlin Point (Berens Island) near Victoria, with his second wife Anna. He died there four years later.

Daykins replacement at Carmanah, George Woodley, only lasted six weeks before demanding to be taken back to civilization. Daykins son Robert took over from Woodley and served for five years until 1917.

The light station has changed greatly since Daykins time. In 1909, the fixed white dioptric seventh-order light was replaced with a fifth-order dioptric apparatus illuminated by petroleum vapor fuel burned under an incandescent mantle. 1910 brought a three-inch duplicate diaphone plant powered by two twelve-horsepower engines, along with a new fog alarm building. New dwellings were erected in 1917 and again in 1948 and 1957. The current tower, an eleven-metre (thirty-six foot) octagonal reinforced concrete structure was erected in 1922 by J. Charlesworth of Hodgson, King & Marble under a $30,000 contract. The lantern room and Fresnel lens, a third-order lens manufactured in Paris by Barbier, Benard & Turenne, were transferred from the old tower to its successor, and the lens remained in use until the light station was electrified in the late 1960s. According to a resident near the station, the lens was broken up and thrown over the bank south of the tower, though one fragment remains at the station.

It would be a rare sight today to see a shipwrecked sailor walking along the old telegraph trail, but thousands of hikers from around the world test their mettle in the footsteps of those historic victims on what is now known as the West Coast Trail.

And while the structure of the station has changed, the hospitality and kindness shown by the keepers to those in distress has remained the same. The current keeper, Jerry Etzkorn and his sons have helped countless adventurers with drinking water, alerts on local hazards, and first aid, including broken bones, hypothermia, a cougar-attack survivor and even a spooked hiker who crawled out of his tent to discover a dead body on the beach. Just a part of daily life at Carmanah Point.

For a larger map of Carmanah Point Lighthouse, click the lighthouse in the above map.


The large labyrinth located adjacent to Carmanah Point Lighthouse was created in 1997 by Janet Etzkorn, wife of Keeper Jerry Etzkorn. Janet had lost her father in 1996 and a nephew in 1995, and the labyrinth was a tool to understand their deaths. Using dolomite lime poured from a big plastic pitcher, Janet and her sister formed twelve concentric circles, the largest having a diameter of fifty-one feet, and then put in the radial segments to form the turns. Lunations and "treasures" have been added to the labyrinth over the years making it even more unique and attractive.