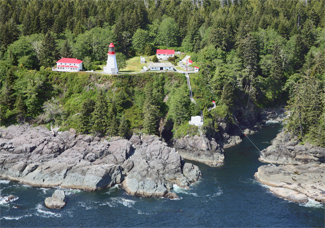 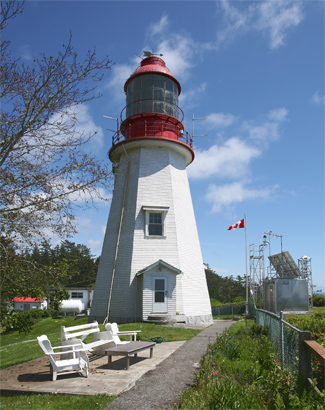 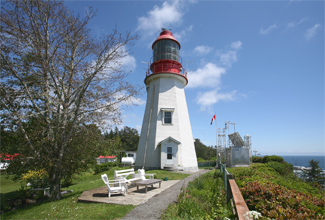 Pachena: foam on the rocks. A fitting name for a point where hundred foot cliffs meet an often tempestuous sea. Originally named Beghadoss Point, after the Becherdass-Ambiadass which shipwrecked there in 1879, the point received its current name in 1907 when the lighthouse was completed. An anglicized version of a Nitinaht name, Pachena represents both the character of the place and the First Nation Pacheedaht Tribe.

The seas surrounding Pachena Point are littered with the wreckage of scores of ships. Each with its own harrowing tale.

There was no choice but to abandon the Janet Cowan, a barque en route from South Africa to Vancouver, after she crashed into the rocks near Pachena Point at 1:30 a.m. during a wild winter storm on New Years Day, 1896. Her twenty-seven crewmen inched their way to shore using rope lines and a bosuns chair. Captain Thompson, the last to leave the ship, lost his grip on the line, flipping the chair, and had to be drug head-down through the surf the rest of the way to shore.

With some suffering from hypothermia and snow falling from the skies, nine of the crew set off in search of help, while the others remained at the shoreline hoping to signal a passing ship. Camped on a bluff overlooking the shipwreck, the eighteen crewmen watchfully waited through eleven stormy, cold, bleak days during which five of them, including the captain, died.

The bluff top survivors were finally rescued by the American tug Tyee on January 11. A Tyee crewman recounted, A sight met [our] gaze that will not be forgotten for years to come. Seated about a fire were 13 men all wearing an expression of utter helplessness and misery. The nine other men reached a cabin along the telegraph trail and were rescued by Phil Daykin, the lightkeeper of Carmanah, who set off on foot along the trail after being telegraphed by the Tyee.

The old telegraph trail, established in 1890 to link Victoria to Bamfield, Cape Beale and Carmanah, was rough at best. Winter storms often brought down the line and washed out the trail. After the wreck of the Janet Cowan, Ottawa talked about adding a lighthouse and developing the trail into a life-saving system, but no action was taken until one of the worst maritime disasters in modern history occurred on January 22, 1906, with the sinking of the passenger ship Valencia.

Captain Oscar Marcus Johnson, neglecting to account for the current, turned into what he thought was the mouth of the Juan de Fuca Strait only to end up hard aground on rocks near Pachena Point.

One survivor recalled, Screams of men, women and children mingled in awful chorus with the shriek of the wind, dash of the rain, and roar of the breakers. As the passengers rushed on deck, they were carried away in bunches by the huge waves that seemed as high as the ships mastheads. The ship began to break up almost at once and the women and children were lashed to the rigging above the reach of the sea. It was a pitiful sight to see frail women, wearing only night dresses, with bare feet on the frozen ratlines, trying to shield children in their arms from the icy wind and rain.

Of the 160 passengers and crew, 133 lost their lives. No women or children were counted among the survivors.

After a prompt hearing on the tragedy, the plan to develop the life saving system was begun in earnest. Marine Agent William P. Anderson wrote of the proposal, it is desirable to draw attention to the very great natural difficulties to be overcome; difficulties that can scarcely be realized by anyone who has not personally had experience of the shore to be protected. The rugged front of this section almost defies description. Rocky ledges rise abruptly into densely wooded mountains with a tangle of underbrush that is practically impenetrable, and the shoreline is cut by deep ravines that prevent progress along the shore; thus approach from landward as well as from seaward is practically impossible.

Construction of Pachena Point Lighthouse commenced later that year under the superintendence of Mr. George H. Frost, with most of the materials and supplies being brought in by ship. The work was often delayed by storms that lasted for weeks, undermining the construction site and causing a landslide in February 1907 that carried away the partially built tower. The crew salvaged what they could and started over again.

The lighthouse, an octagonal wooden tower with sloping sides, was built to a height of thirty-eight feet nine inches high from its base to the lantern deck. In addition to the lighthouse, a double dwelling was also constructed along with a square fog alarm building. John S. Richardson, Pachenas first lightkeeper, lit a temporary life-saving beam, in the form of a lantern on a gas tank, on September 1, 1907.

Richardson, a bachelor, did not stay long at the station. His sister, who worked as an assistant, was overcome with depression from the isolation, and in November 1908, jumped off the cliff to her death. Grief stricken, Richardson could not bear to remain at Pachena Point, but would later serve at nearby Cape Beale.

Work on the lifesaving trail began on June 21, 1907 at the Bamfield end. Sixty workmen used handsaws and horse-drawn equipment to cut through the impenetrable forest, following the old telegraph line. By November, when work was suspended for the year, they had cut through twenty-two miles. Twenty bridges were constructed that year over streams and gulches along a route that passed through swamps, thick underbrush and fallen timber. When completed to Carmanah in 1912, the trail was twelve-feet-wide from Bamfield to Shelter Bight, the sight of the Valencia tragedy, and four-feet-wide on to Carmanah. Along its route were shelters stocked with lifesaving supplies and maps to guide victims to safety. The total cost for the trail was over $175,000.

It didnt take long before the system was tested, as the Soquel smashed into Seabird Rocks just west of Pachena Point in January 1909. Upon seeing a fire lit by the crew on an offshore ledge, the lightkeeper at Pachena Point telegraphed for help. All aboard the Soquel were saved, except for the captains wife and baby who were crushed when the vessels mast snapped.

In 1909, a lantern room and first-order Fresnel lens, manufactured by Chance Brothers of England, were installed atop the wooden tower. The priceless lens, which revolved on a bath of mercury to produce a double flash every 7.44 seconds, remains behind curtains in the lantern room today.

In addition to the lighthouse keepers, the station was also home to linemen associated with the telegraph system. In 1907, a wireless station was built on the point, and a direction-finding antenna was added in 1923. The little community used the base of the lighthouse as a schoolroom for the children on weekdays, and as a dance hall on the weekends.

The vital role of the lighthouse was proven during World War II. After the shelling of Estevan Lighthouse in June 1942, the lights along the West Coast were ordered extinguished, and their signature white and red towers were painted over in camouflage grey-green. On April 1, 1943, the community thought the war had come to Pachena when they heard the pounding of deck guns and saw star-shells ripping through the night sky. The source of the salvo was soon discovered to be the crew of the Russian ship SS Uzbekistan, which had made the classic mistake of missing the Juan de Fuca Strait and ramming into the rocks two miles east of the point. While there was no loss of life, had the light been shining, the wreck would have undoubtedly been avoided. The West Coast lights were reinstated eight days later.

The radio station equipment and personnel were moved to Spring Island in 1950, and after the war, with more advanced marine navigational equipment and air rescue, the life saving trail became less critical. Trail maintenance was discontinued, and it fell into disrepair until Parks Canada redeveloped it in the 1970s. Today it is known as the West Coast Trail, and its seventy-seven kilometres are considered one of North Americas most challenging hikes.

Hikers walk in the footsteps of shipwreck victims, slogging through temperate rain forest and rugged coastline past remnants of historic shipwrecks. Pachena Point Lighthouse, an oasis along the trail, is now a Recognized Heritage Building and the only remaining wooden lighthouse on the West Coast. The magnificent Fresnel lens was put to rest in 1997, when a four-metre pole with a much dimmer light was installed seaward of the tower.

In 2010, the Pachena community numbered just two, a husband/wife lightkeeper team, though maintenance workers for the West Coast Trail did spend an occasional night at the station. Hikers from all over the world have stopped by Pachena Point in recent years including descendants of the Valencia victims and those who spent their childhood at the station. Pachenas keepers continue to play a vital role in helping the injured and distressed, whether on land or sea, in a landscape that dwarfs all human endeavor.

A major restoration of Pachena Point Lighthouse began in the fall of 2015. As part of this work, the lantern room was jacked up off the wooden tower, so that repairs such as installing a new main wooden beam in the lighthouse could be carried out. By the end of April 2016, the scaffolding had been taken down, revealing an immaculate red-and-white lighthouse.

For a larger map of Pachena Point Lighthouse, click the lighthouse in the above map.