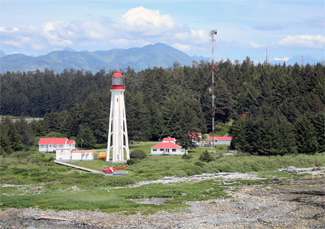 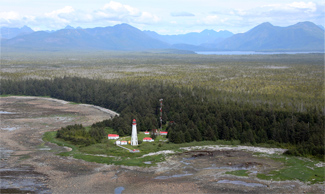 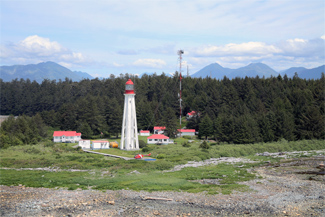 Situated halfway up the west coast of Vancouver Island, Estevan Point is a remote location of wind, sand, and boulders, bordered on one side by the vast Pacific Ocean and the other by a sea of trees.

Situated at the southwest extremity of Estevan Point, at Hole-in-the Wall, is one of the most dramatic lighthouses of the Canadian west coast. Stiffened by eight flying buttresses and built using Colonel William Patrick Andersons design, the tower stands 102 feet tall and has often been described as a rocket poised for take-off.

The point, part of the Hesquiat Peninsula, was named Punta San Esteban by Juan Perez on August 8, 1774 as he journeyed to Nootka Sound. Captain James Cook renamed it Breakers Point in 1778, and this name was used by the English explorers, but charts since 1848 have used Estevan Point.

The west coast of Vancouver Island was only lit by two lighthouses in the nineteenth century, despite heavy marine traffic. The tragic wreck of the Valencia in 1906 near Pachena Point, spurred the Canadian government to provide more aids to navigation for the region, and in 1907, approval for a light station at Estevan Point was given. Construction of a light, fog alarm, and wireless telegraph station commenced under the charge of Thomas N. Tubman with a workforce of about ten men.

With no safe landing at Estevan Point, all supplies were offloaded five miles away at the First Nation Village of Hesquiat. The workmen hacked a trail through dense forest, bridging ravines and rocks, and laid track for a horse-drawn tramway. In November 1908, the combination of a high tide and a winter gale carried away twenty-five yards of track, and made another 200 yards useless. A.L. Gray, the officer in charge, ordered the men to pack supplies on their backs and in wheelbarrows. The rain did not let up, and Alfred Nelson, who took over from Gray, wrote a few months later that the weather had been simply awful . . . Well, we went to work and screened about 20 yards of sand and then the horse got sick so we could not haul it away and now the high tide and wind the last month washed it all back to the sea.

Not only did the workmen endure the storms of the west coast winter, but they barely survived on meager food. One workman wrote that one of the gang had shot a wild bull which provided ten days of fresh meat, but then began a period of salt meat, day after day, morning, noon, and evening.

By 1908, the fog alarm building, double-dwelling for the lightkeepers, and the wireless telegraph station had been finished. The five-inch diaphone fog alarm plant was installed in 1909, and the tower was completed late that year. Using a first-order Fresnel lens, built by Chance Bros. of England, the light began service in February 1910. The lens had a focal plane of 127 feet above sea level and produced three white flashes in quick succession every ten seconds.

Colonel Andersons design became known worldwide, prompting Fredrick Talbot, in his 1913 book, Lightships and Lighthouses, to declare the design, the last word in lighthouse building. Talbot goes on to describe the location at the time the lighthouse went into service: The surroundings of this station are most romantic. Landing anywhere in its vicinity is extremely difficult and dangerous, and the engineer had to select a point about two miles distant for this purpose. From this place a road and tramway have been laid through a grand primeval forest, such as is to be found only upon Vancouver Island, wherein roams a drove of magnificent wild cattle.

Upon this scene came the first keeper, Otto Buckholz, a veteran sealer who had helped with the construction of the lighthouse. Somehow, Buckholz and Mr. Luckovitch, the storekeeper at Hesquiat came into a disagreement. The Daily Colonist reported the following:

While Captain Otto Buckholtz  a well-known mariner who hunted seals, took steamers through Arctic ice to land Argonauts first at Cape Nome and made many notable voyages, and of late has tended the new lighthouse at Estevan Point  is peacefully looking after his lanterns on the wreck-littered island coast, some of his neighbors at Hesquiat are seeking to have him pent in a dungeon deep, or at least ordered to pay unto HM, his heirs and assigns forever, a money fine in punishment for a dire offense. They charge the lightkeeper with having shot a cow. Mrs. Antone Luckovitch, wife of the storekeeper at Hesquiat, and her daughter, who arrived here on the last trip of Tees received a telegram yesterday from the West Coast storekeeper which stated laconically: The cow is shot. Forthwith the ladies hurried to the Superintendent of provincial police and asked that the law be brought into place at once and that the body and person of Captain Buckholtz be seized forthwith. But have you any evidence that he shot the cow asked the police. Sure, said the ladies in unison. It must be him for he had threatened to do it. Meanwhile, the law waits while further investigation is made of the fate of the West Coast cow.

Jens Peter Jensen, the third keeper of the light, was on duty when just after midnight, on Friday, December 6, 1918, a magnitude seven earthquake struck off the west coast of Vancouver Island. At Estevan Point Lighthouse, mercury sloshed out of the lens table, parts of the glass lens were smashed, and the steel reinforced concrete tower cracked for its full length in several places. The light was temporarily put out of commission until enough new mercury could be added to facilitate the rotation of the light.

Keeper Jensen wrote to headquarters, Upon present conditions with unusual weather and earthquakes find that I will have to be releaved [sic] either for a trip or for good, do not care which.

The wireless station located at Estevan became the busiest and had the greatest coverage of any Canadian station on the west coast. On January 4, 1925, it was in contact with the Sa Mukura as it arrived in New Zealand, the longest distance recorded for two-way communication at the time. It was common for it to be in contact with vessels arriving at Australia and Japan, and the ability to reach out over tremendous distances on the medium and high radio frequencies was described as magical. By 1939, at the outbreak of the World War II, the radio station was one of the most important in the North Pacific.

Perhaps the reputation of the wireless station was what led Estevan Point Lighthouse to be the only aid to navigation in Canada to encounter shell fire during World War II. Edward T. Redford, then chief wireless operator at Estevan Point, reported the scene that occurred on June 20, 1942:

The submarine surfaced about two miles offshore and was plainly visible. Shelling commenced at approximately 9:40 p.m. and continued for about 40 minutes. The first shells landed on the beach about 100 yards in front of the lighthouse. Mr. Lally, who was the light keeper at the time, immediately put out the light. The sub apparently then raised its sights, for from then on the shells went overhead. Approximately 25 shells were fired and, except for a few buildings hit by shell fragments, no damage was caused either to the lighthouse or radio station. With the exception of the men on shift, who tapped out word of the shelling to Pacific Command, all others gave a hand getting the women and children away from the settlement. The submarine pulled out on the surface and everyone could see and hear the diesel engines quite clearly. While naturally there was some nervousness, everyone, including the women and children, took the whole incident in their stride, then spent the following day souvenir hunting.

Controversy has surrounded the incident ever since. Japanese sailors confessed that their submarine had attacked Estevan lighthouse. However, some allege that the attack came not from a Japanese submarine but from an American or Canadian cruiser in an effort to gain Canadian public support for the war effort and to push forward conscription legislation.

Light station personnel and First Nation members quickly located shells from the attack so they could be removed, but Assistant Keeper Don Weedens wife Linda found a stray, unexploded shell from the incident while she was out walking in the woods in 1973.

The radio station remained in operation until 1979, and the first-order Fresnel lens was replaced by an AGA PRB-21 beacon around the same time. The Sooke Region Museum acquired the Fresnel lens in 2004 and mounted it in the Triangle Island lantern room on its property.

Estevan Point Lighthouse still sends forth its beam of light and is tended by the watchful care of a resident lightkeeper. Speaking of the isolation at the point in 1997, Keeper David Edgington said, People say keepers are all nuts, but thats what we say about people who choose to live in the city.

For a larger map of Estevan Point Lighthouse, click the lighthouse in the above map.

Estevan Point Lighthouse is most easily seen from the air. Though there are no developed trails in Hesquiat Peninsula Provincial Park, each year several hardy souls are dropped off at Escalante Point. After hiking 50 km (31 miles) around Hesquiat Peninsula, the trekkers are picked up at Boat Basin. Options for accessing the park are a Water Taxi and Air Nootka from Gold River and Tofino Air from Tofino.