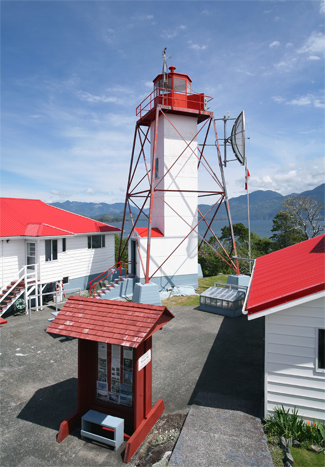 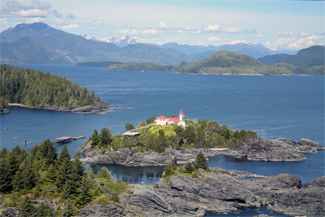 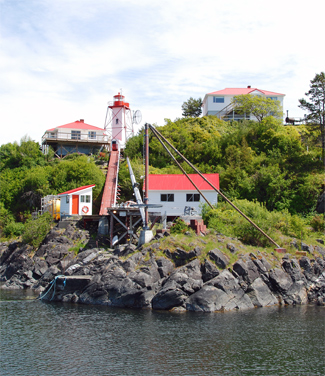 Aboard the Uchuck III, heading west from Gold River, you sense each mile along the Muchalat Channel toward Friendly Cove is taking you further back in time, until you enter an era when there was only water, trees, and rocks.

In 1778, Captain James Cook and his crew aboard the Resolution became the first Europeans to land in current day British Columbia. Standing on the deck of his flagship, Captain Cook asked the welcoming Mowachaht what they called the place. Thinking that he was asking for a sheltered anchorage, they answered, Nootka-satl which roughly translated means to go around. The name stuck.

Due to the abundance of the coveted sea otter, Nootka Sound became a hotly contested prize between the English and Spanish. Friendly Cove, the summer home of Chief Maquinna and the Mowachaht, was where the Spanish built a fort in 1789 and where in 1792 Captain George Vancouver and Don Juan Francisco de la Bodega y Quadra attempted to negotiate possession of Nootka Sound.

Within twenty years, the British and Spanish had moved on, much to the relief of the sea otter, then on the brink of extinction.

On December 7, 1905, Captain Davidson and the crew of the King David spotted land and what they thought was the light at Cape Beale. After drifting northward for three days in a dense fog, they found themselves in a precarious position, stuck in the middle of Bajo Reef near Nootka Sound. Their vessel snagged on two big knuckles of rock when its anchor slipped, and the ship had to be abandoned. Taking to lifeboats, the crew was able to haul themselves and some provisions to a shingle beach, where they found an abandoned Indian camp.

Not realizing how far north they had drifted, they sent off a lifeboat with six men, including the Chief Officer, to try to reach the life station at Cape Beale. The six were never heard from again.

After being marooned for thirty-three days, the shipwrecked men were about to launch another lifeboat toward Cape Beale, when they were spotted by the crew of the Queen City, outbound from Nootka Sound. Their camp had been a hundred miles from Cape Beale, but just eight miles from Friendly Cove.

In January 1906, the same month the crew of the King David was rescued, Herbert Smith, the storekeeper at Friendly Cove, established a light at the entrance to Nootka Sound to assist mariners. Three years later, a petition was sent to Victoria, signed by many settlers and others involved in the shipping interests of the West Coast of Vancouver Island, humbling praying for a light at Yuqout Point to mark Nootka Sound.

Ottawa obliged, and in 1910, construction began on a lighthouse atop San Rafael Island, the middle and largest of the St. Miguel group of islands lying off the entrance to Friendly Cove. The finished lighthouse measured thirty-seven feet tall from the base of its square dwelling to the top of the octagonal lantern centered on the structures hipped roof. On March 15, 1911, Herbert Smith, the storekeeper turned lighthouse keeper, first exhibited the new light, produced by a fourth-order lens at a focal plane of 108 feet. Smith had emigrated from England with his eldest son and in 1912 requested leave to return to England to bring back his wife and the rest of his family. His twenty-two-year-old son was left in charge of the light during his absence.

The cold, clammy weather at Friendly Cove wreaked havoc on Smiths wife, and within a few years of her arrival, rheumatism had made her a confirmed invalid. Smith petitioned for a transfer and happily accepted an appointment to Cape Mudge, where his daughter would be able to attend school. His friend, William Taylor took over the light on October 18, 1918.

At midnight on December 6, 1918, the Nootka Lighthouse shook violently, when a magnitude 6.9 earthquake struck just off the coast. The lighthouse sustained only minor damage, but one month later, Taylor had had enough. In his resignation, he wrote:

My wife has contracted Rheumatism since being here owing to the dampness, we have had so many severe storms that it has been necessary to mop the bedroom floor during the night, and move the bed to the far corner of the room to escape the water. Since the Earthquake my Wife is nervous each time there is a storm as the building shakes . . . I have no desire to cripple my wife, as Smith did his, if Smith had been honest about the conditions of things he would never have got me to relieve him.

Finding a replacement was no easy task. Taylor tried in vain for weeks, until authorities convinced Patrick Foley, a former keeper at St. Marys Lighthouse in Newfoundland, to take the appointment. Foley resigned a few months later after a month-long illness, and Arthur Marks, a local, took over. Marks hung in for eight years, until he retired in 1927 at age 60.

A diaphone fog alarm was added to the station in 1927, replacing a hand horn that the keepers had sounded in response to a vessels signal. In 1958, new lighthouses, built using the same plans, were erected at Nootka and Cape Beale. These thirty-two-foot, steel, skeletal towers have a square, central column constructed around a staircase that provides access to the lantern room. The horizontal, wooden slatwork originally found on the tower at Nootka has been removed but is still present at Cape Beale.

Tom Fish took charge of Nootka Light in January 1929. Just five months later his hand went through the derrick winchs main gear, resulting in the amputation of two of his fingers. He stayed on and worked diligently until August 12, 1935, when his wife Annie found him unconscious in the garden, having suffered a severe stroke. Annie helped their son Gilbert keep the light until the following month, when she took her husband to Point Atkinson Lighthouse, where their eldest daughter, a trained nurse, lived with her husband, Keeper Ernie Dawe. Toms health was improving at Point Atkinson, until he contracted pneumonia on Christmas Day. He died May 29, 1936. Annie wrote to the Marine Agent, I am rather tired after my long battle with death. Am taking his ashes to Nootka and committing them to the sea in front of the home he loved.

Ed and Pat Kidder also developed a fondness for this timeless spot during their thirty-three years as keepers at Nootka. Ed and Pat were high school sweethearts in Nanaimo, but the pair was separated when Pats father became keeper at Entrance Island, just offshore from the city. Missing his girlfriend, Ed would often drive to the wharf and flash his headlights toward Entrance Island so Pat would know he was thinking about her. Shortly after finishing high school, the Kidders began their forty-two-year lightkeeping career at Gallows Point in Nanaimo Harbor.

Known for helping those in need and their love for each other, Ed and Pat had one rescue they will never forget. On January 10, 1989, Pat received a desperate Mayday call over the radio. Ed and his son Dean quickly alerted the Coast Guard and then initiated a search in their own boat. They soon came upon a clam boat with its windows closed. After climbing aboard and entering the cabin, they discovered two Coleman stoves, a Coleman heater, and a Vietnamese family of six suffering from severe carbon monoxide poisoning. Ed and Dean helped them to shore, where they were revived and then evacuated by a Coast Guard helicopter.

Of helping those in distress, Ed remarked, It wasnt a matter of heroics. It was a matter of being human.

Nootka lightstation, nestled on the outer edge of the world is an isolated spot. The keepers occasionally see ragged hikers from the Nootka trail or passengers from the Uchuck III, but it is mostly a life of solitude.

The renowned British Columbia artist, Emily Carr, visited the lighthouse in 1929 and described the west coast outpost as a strange wild perch on a nosegay of rocks, bunched with trees, spiced with wildflowers.

For a larger map of Nootka Lighthouse, click the lighthouse in the above map.

Friendly Cove, located adjacent to Nootka Lighthouse, is accessible via Uchuck III, a converted minesweeper, during the summer. A Water Taxi and Air Nootka also provide service between Gold River and Friendly Cove.


In 1778, Captain Cook was the first European to set foot on what is now British Columbia when his two ships, Resolution and Discovery, visited an inlet on the western coast of Vancouver Island. On account of the warm reception he received from the natives, Cook named the place Friendly Cove. The crew of the Boston didnt receive quiet the same treatment when they stopped at Friendly Cove in March of 1803.

John Salter, captain of the Boston gave Maquina, the chief of the Nootka Indians, a double-barreled gun, and the following day the chief returned to the Boston with several wild ducks he had shot along with the gun, which the chief had broken. Maquina said the gun was bad, which offended Salter, and Salter in turn offended the chief.

Maquina returned the following day with several of his men seeking revenge for his maltreatment and, after being allowed aboard the Boston, massacred its crew. Out of the ships twenty-seven crewmen, only two survived, John Jewitt and John Thompson, who were both below decks at the time of the attack. Jewitt and Thompson were held captive for twenty-eight months before being rescued by the brig Lydia in the summer of 1805.

Jewitt kept a journal during his time with the Nootkas, and in 1815 published a book titled A Narrative of the Adventures and Sufferings of John R. Jewitt. The book is now known as White Slaves of the Nootka.

Ray Williams, a descendant of Maquinas tribe, still lives at Friendly Cover during the summer. His welcome to the cove is friendly, but you will be asked to pay at least $10/person as a landing fee.