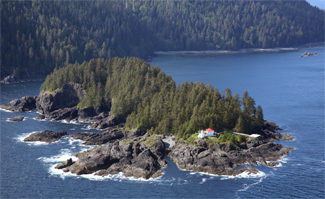 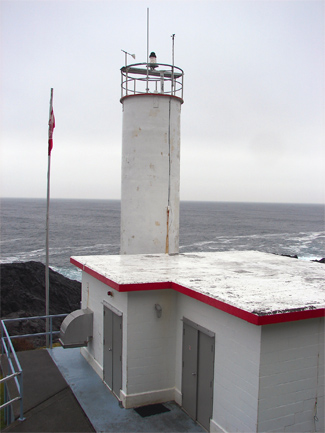 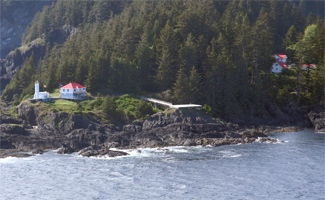 Near the northern end of Vancouver Island, Quatsino Sound cuts nearly across the island before splitting into three inlets that run east, south, and northeast. Tucked just inside the northern entrance to the sound is twenty-five-acre Kains Island, which was set aside by the Dominion Government as a lighthouse site on June 29, 1905. Kains Island was formerly known as Entrance Island but was renamed around 1898 to avoid confusion with Entrance Island off Nanaimo.

In 1904, the British Columbia Board of Trade asked the Department of Marine to establish a light at the entrance to Quatsino Sound to support the sawmills and mining industries that operated on its shores. As a temporary measure, a thirty-one-day Wigham light was placed on the southeast end of Kains Island in 1907, and G. H. Jackson was paid $300 a year to keep an eye on it. This seventh-order light had a focal plane of ninety feet and was mounted atop a small, enclosed, wooden tower built on an open-frame platform. The cost of establishing the light, excluding the illuminating apparatus, was $699.26.

Work on a permanent lighthouse began in 1910 using day labour under the direction of H.C. Killeen, with local Siwash Indians being hired to transport building materials to the island. A square, two-storey, wooden dwelling with an octagonal iron lantern rising from the middle of its hipped roof was finished that December, and Nels C. Nelson became the islands first resident keeper. Keeper Nelson lived on the remote island for five years, and one reminder of this period survives, a grave. Walter Peterson paid a visit to his sister and brother-in-law in 1913 and drowned on December 19, when his skiff capsized offshore. Formerly marked by a white, wooden cross, Petersons grave now has a stone monument, which records that the Copenhagen-born man was just twenty when he perished.

James Sadler was hired as the next keeper and arrived at the station with a one-year-old child. Catherine, his wife, had just given birth to their second child and remained at Quatsino village until she had recovered sufficiently to make the journey out to Kains Island. Shortly after delivering the couples third child, Keeper Sadler set off in the stations skiff to hail a passing vessel, as their supplies were running perilously low. It took three attempts to get the skiff beyond the breakers, and when this feat was accomplished, a log struck the boat, turning it over. Sadler barely managed to make it to shore and haul himself up to the lighthouse, and when his wife discovered his foolhardy act, she became delirious.

After a six-month drought, mail finally arrived at the lighthouse on September 5, 1918. Instead of finding the hoped-for letter announcing their requested transfer to Green Island, the couple received the dreaded news that World War I had claimed Catherines younger brother. Already stretched to the breaking point, Catherine snapped. Keeper Sadler recalled the subsequent state of his wife.

Sometimes she would begin screaming and calling for help. She repeatedly talked to herself and often recalled the time I was nearly drowned when the skiff overturned.

Her mind sometimes went back to her home in the Old Country, to her girlhood days in Stirling, Scotland. I was forced to tie her to the bed-posts at times, fastening her hands above her head. When she was free and I was not watching her, she would tear books to pieces and throw plates and tableware on the floor.

Once I just caught her as she was about to leap over the verandah. At the time she appeared to see a vision of her father and she was calling to him. I couldnt get her to eat. Goats milk, half a cup at a time, was all she would take. The children languished also from lack of nourishment, especially the little ones.

Keeper Sadler flew the stations ensign upside down, a sign of distress, and anxiously watched for a passing vessel. On the eighth day, Sadler spotted a whaler entering the sound and dashed to his hand foghorn to squeeze out a few, quick bursts. The exertion proved too much, and Sadler collapsed near the shore. Fortunately, a sailor with a telescope and a keen eye spotted the inverted flag, and the boat altered course. After witnessing the fragile state of the family, the whalers steamed to Port Alice and returned with a doctor. Catherine was taken to Port Alice with her youngest two children, and the doctor telegraphed Victoria, informing the marine agent of the situation and requesting aid be sent to the lighthouse.

Gordon Halkett, superintendent of the provinces lights, arrived a week later, and took charge of the station for two days so Sadler could visit his wife. Sadler signed papers to have his wife committed to an insane asylum in New Westminster, made arrangements for his children, and then returned briefly to the station before submitting his resignation. Upon reaching Victoria, Keeper Sadler shared his story with the Colonist, which published his account in a story entitled Locked from the World on Northern Island. Halkett authored a piece refuting Sadlers claims that his pay was insufficient to support a family, but he had trouble finding anyone to accept the assignment at that rate, and the salary at Quatsino was soon raised from $540 to $876.

After a string of temporary keepers, it was James Quinn, a seventy-year-old former sailor who agreed to accept the position for the increased wage. Though Quinn kept a good light, he was prone to rambling, inaccurate statements, and after Halkett visited the station in October 1921, he reported, I believe it is only a matter of time before he will be unable to look after himself.

Alfred Dickenson, the next keeper of the light, saw his salary increase to $1,100, but that was only because a fog alarm that required additional work was erected at the station in 1924. Keeper Dickenson and his wife initially reported that the island was almost paradise, with songbirds so tame that we can nearly pick them up and deer that brought their fawn into the yard. There is no excuse for sane healthy people being lonely at this station, Dickenson concluded.

By April 1925, Dickenson had changed his mind, and he asked for leave from the island as his wife had not seen another woman in nearly a year. Keeper Dickenson could go out in his boat and talk to the halibut fishermen and the mailman who came twice a month, but his wife had no such interaction and was starting to get restless. That fall, the couple was transferred to Capilano Lighthouse in Vancouver harbour, just a stones throw from civilization.

Sydney Warren had been out of work for six months and his wife was expecting their seventh child, when he heard about the job opening on Kains Island. The marine agent was a bit leery to send another family to the station, but Warren was an engineer and promised to keep the equipment in fine shape. Warren was given the position and soon sailed north with his six young daughters. Jessie, his wife, arrived six months later with their infant son, and soon began work on a large garden. The family also raised chicken and rabbits to supplement the supplies brought by the Estevan. One year, Halkett noted the family had canned forty pounds of green peas harvested from their garden and grew almost everything offered by a vegetable truck.

Five years of nearly idyllic life on the island came abruptly to an end on October 23, 1929. Keeper Warren was rowing out to meet the mail boat, when a wave swamped his skiff and tossed him overboard. With the added weight of his wet clothing, the heavy-set keeper quickly sank. Horrified, Jessie and her daughters hollered for the mailman to help, and then Doris swam out to try to save her father. Doris managed to bring him to the surface just in time to be picked up by the mail boat. Keeper Warren was taken ashore, where vain attempts were made in to revive him. The family went to Quatsino for the funeral then returned to look after the light until a replacement keeper could be found. The Estevan arrived on October 30 and took the family and their belongings away from the island with its now tainted memories.

A white, circular tower replaced the wooden lighthouse on Kains Island in 1977. Modern keepers continue to live in two dwellings at the station.

Located on the southeast end of Kains Island just off the west coast of Vancouver Island at the entrance to Quatsino Sound.
Latitude: 50.441194, Longitude: -128.032444

For a larger map of Quatsino (Kains Island) Lighthouse, click the lighthouse in the above map.

Quatsino Lighthouse can be accessed by kayak or boat from Winter Harbour, which is reached via two hours of driving on good logging roads from Port Hardy. A quicker option by boat would be to launch at Coal Harbour.