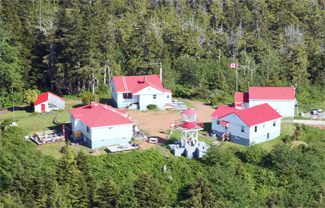 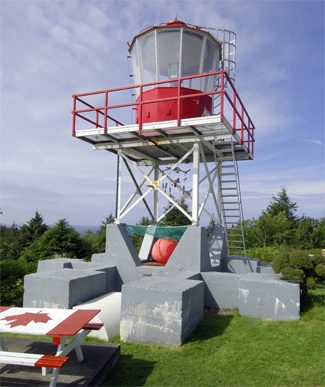 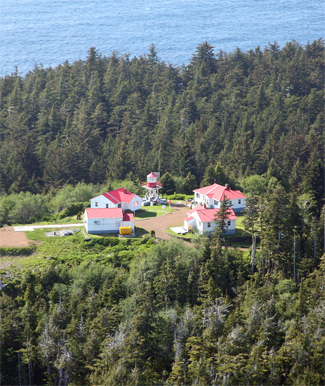 Cape Scott, the extreme northwestern point of Vancouver Island, is a 150-metre-high promontory linked to the island by a low sandy neck, roughly 200 metres wide. In 1786, James Strange led a fur trading expedition to the western shore of Vancouver Island using two vessels: the Captain Cook under command of Henry Lawrie and the Experiment captained by John Guise. Strange named the northwest tip of Vancouver Island Cape Scott in honor of David Scott, a Bombay merchant who had backed the adventure, while the bay to the south of the capes sandy neck received the name Guise Bay and the area on the opposite side of the neck was called Experiment Bight.

A string of five islands, known as the Scott Islands, extend westward from Cape Scott. Cox Island, the easternmost and largest of the group, is five miles from the cape, while the outermost, Triangle Island, lies twenty-nine miles offshore.

Situated at the southern side of the entrance to Queen Charlotte Sound, Triangle Island seemed like a natural place for a lighthouse, and in 1909 a roadway was blasted from the shore to the islands lofty peak, where a reinforced concrete lighthouse and a wireless telegraph station were built over the course of the next year. The forty-six-foot tower was surmounted by a circular lantern room that housed a powerful first-order Fresnel lens.

James W. Davies, who had previously served at Scarlett Point and Egg Island, landed on Triangle Island in 1910 with his wife and three daughters to take charge of the light. It was soon evident that the islands 700-foot summit was a poor location for a lighthouse as during one year, the keepers recorded 240 days when fog, mist or low cloud cover obscured the light.

In 1919 the Department of Marine finally acknowledge its folly. The lightkeepers were removed from Triangle Island, and the towers lantern room and lens were dismantled and transferred to Estevan Point. The radio station, unimpaired by the fog, lasted two more years, but its operators were finally freed from the inhospitable outpost in 1921, and the seabirds once again had free rein over Triangle Island.

The northwest tip of Vancouver Island was dark for just a few years, as in 1927 an unwatched light, a wooden mast fitted with a red lantern, was established on Cape Scott. By this time, the first white settlers at Cape Scott, a group of Danes from the upper plains states led by Rasmus Hansen, had already come and gone. These hardy pioneers arrived at this remote corner of Vancouver Island in 1897 to establish an ethnically homogenous community and planned to subsist on fishing until a road, promised by the government, would allow them to take their beef and dairy products to market. The road was never built, and by 1907, most of the settlers had relocated elsewhere.

In the 1950s, after obtaining land and water rights from the Provincial Government of British Columbia, the Aluminum Company of Canada (Alcan) undertook one of the more ambitious Canadian engineering projects of the 20th century. Kenney Dam was built across the Nechako River, and a 16-kilometre-long tunnel was bored under Mt. Dubose to transport the captured water to a generating plant at Kemano. From there, a transmission line was strung to carry the electricity over eighty kilometres to Kitmat, where a power-hungry aluminum smelter was established. In addition, Alcan had to plan and build the community of Kitmat from scratch for its employees and construct a deep sea terminal to export its product.

The increase in ocean going vessels along the northwest coast due to the completion of the Alcan smelter prompted construction of the final three manned lighthouses in British Columbia. Stations at Cape Scott and Chatham Point were completed in 1959, and one at Bonilla Island followed in 1960.

During World War II, the Royal Canadian Air Force erected a secret radar installation on Cape Scott to detect Japanese aircraft. The radar station, staffed by roughly fifty men, consisted of two sites: the radar operations center and a camp. The radar equipment was situated near the tip of the cape and was connected by a makeshift road to the sleeping quarters, mess hall, sick bay, and other buildings located in the woods on the other side of the sandy neck.

The radar station was abandoned in 1945, after the conflict was over, allowing the builders of the Cape Scott Lighthouse to use the structures left on site. The concrete foundation for the former radar tower was selected as the base for the light tower, and the old radar shack, where operators sat for hours in darkness staring at their small screens, is now home to two diesel generators that power the light.

Three keeper's dwelling were constructed near the tower in 1959 by Turner Contracting Co., who also built a fog alarm building with annex on the very tip of the cape, a half-kilometre from the lighthouse. The fog alarm had to be accessed by an elevated walkway and a suspension bridge that spanned a surge channel. The first head keeper assigned to Cape Scott was William Gardner, who had to move just a short distance up the coast from his previous station at Kains Island.

In September of 1981, a new tower, equipped with an AGA PRB 21 model, consisting of panels of sealed beams, eight to a panel, replaced the first tower that supported a DCB 36 beacon. Keeper Jerry Etzkorn contributed the following series of pictures that documents the erection of the current tower: 1, 2, 3, 4, 5, 6, 7.

The lightkeepers at Cape Scott have the cape to themselves for most of the year, but are happy to welcome the intrepid hikers that migrate to the area each summer, when the weather is a bit more hospitable. The stretches of long sandy beaches at Cape Scott are a beachcombers paradise, and a few lucky individuals have found prized glass floats that have broken free from Japanese fishing nets and traveled more than 8,000 kilometres across the Pacific Ocean.

During Glen Borgens first three weeks at Cape Scott as keeper, he retrieved three glass balls from the nearby beaches. Most floats take about three years to make their trans-pacific journey, but some have been circling the Pacific for nearly a century, before washing ashore on Cape Scott. The beachcombing here is phenomenal, Borgen says. Low tide is like a Christmas present every day.

For a larger map of Cape Scott Lighthouse, click the lighthouse in the above map.

From Port Hardy, travel west 48 km (30 miles) to Holberg, and then continue another 20.2 km (12.6 miles) to the San Josef Bay and Cape Scott Trail parking lot in Cape Scott Provincial Park. From the parking lot, Cape Scott Trail leads 23.6 km (14.8 miles) north to Cape Scott Lighthouse, which is actually located just outside the park, but the grounds are open to the public.