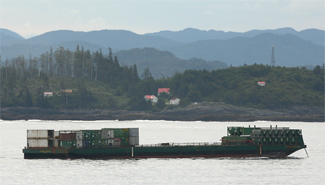 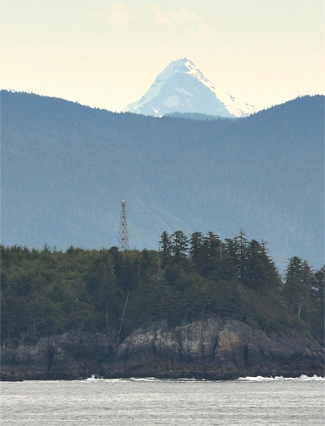 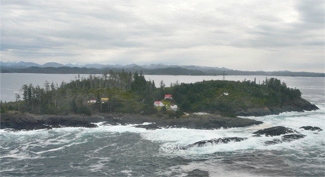 Egg Island lies near the entrance to Fitzhugh Sound from Queen Charlotte Sound and is exposed to the full sweep of the Pacific Ocean. In August 1898, the government steamer Quadra delivered a large force of men to build a lighthouse on an islet off the western shore of Egg Island. The following description of the lighthouse, which commenced operation on October 7, 1898, appeared in the annual report of the Department of Marine:

The lighthouse stands on the summit of the islet attached to the west side of Egg Island, the island having been cleared of trees to receive the building, which is of wood, having a square tower with vertical walls rising from the west corner of the light-keepers dwelling, and surmounted by a polygonal iron lantern. The building is painted white, with the lantern red. Its height, from its base to the vane on the lantern, is 50 feet.

The light is revolving white catoptric light, the flashes attaining their points of greatest brilliancy every 30 seconds. It is elevated 72 feet above high water mark.

The building was erected by days labour, under the supervision of Mr. D. M. Fraser, of Vancouver, and cost $3,601.86. The large iron lantern and illuminating apparatus, formerly in use at Yellow Island, were utilized at this station.

Just weeks before William Brown left to take charge of Egg Island Lighthouse, his wife died, leaving him to raise their two-year-old son. In December 1899, the light on Egg Island was reported out, and the steamer Quadra was sent north from Victoria to investigate. The Victoria Daily Colonist painted the following picture of the station: Penned up in a desolate corner of the world, without communication with civilization for whole months at a time, the position is a most unenviable one; and as the light is not visited by the government steamer except on rare occasions during the year, the possibility of serious trouble occurring to the island hermits is not remote.

The Quadra arrived at Egg Island on Christmas Day and found Keeper Brown too weak to wind up the lights revolving apparatus and barely able to care for his son. Brown reported that he had flown his ensign union down for several days and though several steamers passed, and one even came in very close and blew its whistle, not one would send a boat, in the cause of humanity, to make any enquiries as to the signal of distress. Brown and his son were taken to Victoria for medical attention, and a temporary keeper, brought north on the Quadra, was placed in charge of the light.

In May 1904, another distress signal was raised at Egg Island, this time by Robert Scarlett, the lights second permanent keeper. When the signal was reported, the Marine Department dispatched the dominion cruiser Kestrel from Port Simpson to the island. After arriving at Egg Island, Captain Newcombe waded ashore in breakers and found that Keeper Scarlett simply wanted to send some eggs to market, and since freshness was the principal virtue of eggs, he had wanted a steamer at once. Captain Newcombe purchased the keepers eggs, relieved that nothing serious was wrong at the station.

Just five months later, there was a serious problem at the station, and Keeper Scarlett would have given anything for a few extra eggs. The steamer Quadras regular supply trip was delayed over a month, and when it did arrive at Egg Island on November 20, 1901, the Scarletts were in a state of starvation. We were short rations for over a Month, Keeper Scarlett wrote to the Marine Agent, and if it had not been for what we raised in the Garden and our hens and Goats, we would have had to raised the Flag of Distress or Starve.

It wasnt long before the precarious location of Egg Island Lighthouse was evident. A breakwater was built to protect it in 1900, but when this proved insufficient, the lighthouse was moved sixty-four feet to the extreme summit of the islet and placed atop a substantial concrete foundation in 1903. This work was done by A.O. Roy, with the assistance of the crew of the Quadra and cost $1,612.

In 1906, a rectangular wooden structure was built 100 feet north of the lighthouse to house a diaphone fog alarm, operated with air compressed by an oil engine. The signal commenced operation on August 1, 1906 and sounded a five-second blast each minute during thick or foggy weather.

Keeper William Hartin wrote to the Marine Agent in September 1919, requesting to be relieved at once as his wife had gone crazy. Having no female contact and receiving mail only four times a year had led to her breakdown. In 1930, Keeper Arnold Moran, who had been raised at an isolated station, decided to resign after seven years at Egg Island so his son could be educated and his wife could enjoy the benefits of more social interaction. In a letter to the Minister of Marine and Fisheries, Keeper Moran detailed the motivation for his resignation:

I found that the cruel isolation of Egg Island affected my wifes health. It is no light thing, Sir, for a woman to be cut off entirely from all social and religious contacts; to be immured in what is virtually a prison during the term of her husbands service. Should she be blamed for trying to induce me to seek a position where conditions of life are more human?

Arnold Moran purchased a poultry farm in New Westminister, and his brother Tom took his place on Egg Island. On February 9, 1934, the Newington called at Egg Island, and Keeper Moran rowed out and requested permission to take his sick wife to town for medical attention. Captain Ormiston asked James Flewin, his seventeen-year-old mess boy, to stay at Egg Island with Assistant Keeper Dan MacDonald until Keeper Moran returned. A few weeks later, Captain Dixon of the Union Steamship Catalla noticed Egg Island Light was out. A lifeboat was promptly lowered, and the ships chief officer went ashore and found the station deserted. Though no bodies were ever found, it was theorized that MacDonald and Flewin went out fishing and drowned. The Newington returned to Egg Island on March 13 and set the light in operation.

In 1948, Robert Wilkins moved his wife Ada Marie and nine-year-old son Dennis to Egg Island from Green Island Lighthouse. On November second of that year, the Wilkins listened to the stunning U.S. election results that had Truman beating Dewey before retiring to bed. At 2 a.m. the next morning, Dennis was awakened by his mother, who told him to get dressed NOW! and come downstairs. A few minutes before, the sea had broken through a window in the Wilkins downstairs bedroom and given them a good dousing. As the sunroom on the south side of the lighthouse and the walkway on the east had been washed away, Keeper Wilkins had to break the kitchen window on the north side of the lighthouse to get his family over to the fog signal building.

When it was evident that the sea had previously flooded the fog signal building, Keeper Wilkins took his family across the damaged footbridge to the main part of the island, which was higher in elevation. The sea sounded like a raging waterfall, and it soon started to rain marble-sized hailstones that stung like bees through the familys wet clothing.

With his family safe, Keeper Wilkins went back to the bridge to check on the light and witnessed a large wave pick the lighthouse up off its foundation and send it crashing down through the footbridge and into the ravine. The trio moved into an old chicken coop and over the next several days subsisted on a pet rabbit, and a tin of soup, a tin of Prem, and an unbroken egg recovered from the ruins of the lighthouse. On the fifth day, the fishing boat Sunny Boy was seen circling the island, and the family launched the stations boat and rowed out to it. While surprised to learn that anyone had survived the destruction of the lighthouse, the crew willingly fed the Wilkenses and took them to the hospital at Bella Bella.

Robert Wilkins returned to Egg Island the next year as part of the construction crew charged with rebuilding the lighthouse, but his days as a keeper were over. The replacement lighthouse, combination light tower and dwelling, was wisely built of concrete.

Laurie Dupuis, the keeper after Robert Wilkins, brought his wife Peggy and fourteen-year-old stepson Stanley to Egg Island. At first, Peggy was captured by the beauty of her new surroundings. In an article for the Vancouver Sun, she wrote:

The view of the sea on three sides is unsurpassingly lovely and to watch the sun sink into the horizon over the white-capped rollers is a never-to-be-forgotten experience. And just think, no time clock to punch and no bust to catch! If you want to go fishing on a nice day, as soon as routine chores are done, you go; everything else will keep  and then theres always tomorrow.

After two years, the idyllic island life had lost some of its sheen, and the couples relationship started to sour. Peggy had reportedly even threatened to leave Laurie. In April 1901, Peggy went to Vancouver after an acute attack of appendicitis and took Stanley with her. During her absence, Laurie received the following telegram from Peggys ex-husband. I MUST HAVE A PICTURE OF YOU. RECEIVED YOUR LETTER, JUNIOR. GOOD LUCK. Laurie took the telegram to mean Peggy had been corresponding with her ex, when in reality the telegram was referring only to Stanley. Feeling betrayed, Laurie took a gun, went outside, and ended his life.

A few days later, Peggy and Stanley returned to the station and found a stamped envelope addressed to Peggy. When she opened it and read I would sooner die than live without you, Peggy feared the worst. Lauries body was soon located, and after a coffin was procured, the former keeper was laid to rest in Egg Island. Peggy wanted to stay on as keeper, but she was only allowed to serve until a replacement keeper arrived.

In 1963, two single dwellings, a fog alarm building, and storage shed were built on Egg Island proper, instead of the islet on its western side, and a steel tower was placed atop the highest point of the main island for the light. A helicopter landing pad is now located where the earlier lighthouses stood.

Egg Island Lighthouse is best seen from the water and is visible from the ferries that serve the Discovery Coast and Inside Passage from Port Hardy.