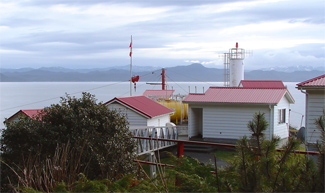 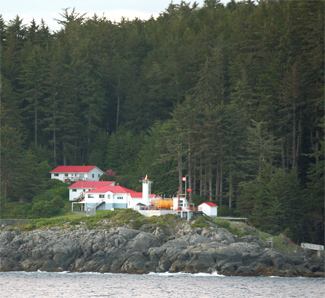 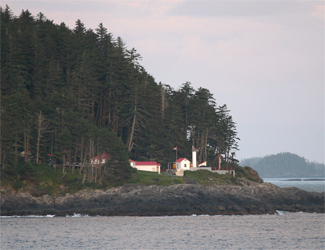 As vessels sail north along the Inside Passage near Port Hardy, they must leave the shelter of Queen Charlotte Strait and venture out into the unprotected waters of Queen Charlotte Sound. Pine Island lies along this transition and is often buffeted by waves from the open ocean. Work on a lighthouse and fog alarm on Pine Island began in 1906 and continued into 1908. The following description of the lighthouse appeared in the annual report of the Department of Marine for 1907:

The lighthouse stands 100 feet back from the extremity of the west point of the island and consists of a square wooden tower, rising from the western corner of a square wooden dwelling and surmounted by a polygonal iron lantern. The tower is 43 feet high from its base to the ventilator on the lantern and the whole building is painted white, with the roof and lantern red. The light is fixed white dioptric of the fifth order, and is visible fourteen miles over an arch of 232 degrees. The fog-alarm will consist of a diaphone, operated with compressed air by an oil engine, and will give one blast of 7 seconds duration every two minutes. The fog-alarm building stands 200 feet northwest of the lighthouse and is a rectangular wooden building, painted white with the roof red.

This work was done by day labour under the foremanship of Mr. Thomas Blair, and the total cost of erecting the building was $21,071.29.

Additional details regarding the completion of the work were published in the report for 1908:

The diaphone plant and machinery purchased last year from the Canadian Fog Signal Company, of Toronto, was installed, and consists of diaphone, operated with air, compressed by an oil engine. A considerable amount of clearing was done around the station as a protection against fire; the work of installing the machinery and clearing the ground being done days labour at a cost of $647.05.

Arthur Gurney was appointed first keeper at Pine Island on the recommendation of William Sloan, his Member of Parliament (MP). Just months after arriving at the station, Gurney wrote Sloan, threatening to quit if his pay wasnt increased. I find it is quite out of the question for me to live on $700 per annum and keep my familythe wages is altogether out in proportion to the amount of work to be performed and to the drawbacks connected with a station like Pine Island. When no raise was forthcoming, Gurney wrote directly to the Minister of the Department of Marine and Fisheries in Ottawa, infuriating the Marine Agent in Victoria.

In February 1909, Gurney tried his luck with another MP, writing: I cannot stay here longer than the beginning of the summer as the two years confinement on this island has broken down my wifes health & I have to get my children educated. In 1910, Gurney thought his escape from Pine Island was a sure thing when the Victoria Liberal Association promised him a transfer to the lighthouse planned for Sheringham Point. Before the station was complete, Prime Minister Wilfrid Laurier and the Liberals lost the election in October 1911, and Francis Shepherd, a Tory MP, now controlled the appointment for Sheringham Point.

Keeper Gurney dispatched his wife to plead their case with Shepherd, and after their tea on April 26, 1912, Anna Gurney was convinced the appointment was theirs. A few weeks later, Gurney wrote to the Marine Agent in Victoria. I have all my personal effects packed and Pine Island Light Station is ready to turn over to the incoming Light Keeper at a minutes notice. I am most anxious to move at your earliest convenience to Sheringham via Victoria. In August, the expectant couple received the crushing news that the keepership of Sheringham Point had been given to someone else. Shortly after unpacking their belongings, the Gurneys learned that they wouldnt have to spend another winter at Pine Island; Ballenas Island was theirs if they wanted it.

Donald McPhee, a bachelor, replaced the Gurneys at Pine Island and soon took out an ad in the Vancouver papers for a housekeeper. A well-educated widow responded and arrived on the island with her two teenagers, Violet and Percival Pike. Within a year, Keeper McPhee had married his housekeeper, and in 1919, the couple transferred to Estevan Point, leaving Pine Island in the hands of Percival Pike and his new bride Mary.

On February 19, 1920, Mary retired to bed, complaining of a slight headache. A few hours later she was wracked by convulsions, slipped into unconsciousness, and gave birth to a baby at 2:30 a.m. When Marys coma stretched into a third day, Percival wired for a doctor, and Mary and the infant were taken to a hospital in Alert Bay. The captain of the vessel that took Mary away reported that the arrangements for looking after Mary at the lighthouse were very bad, prompting the Marine Agent to write a scathing letter to Keeper Pike, demanding to know why the office was not notified of her condition. Apparently, the arrival of the infant came as a complete surprise to Percival, who never detected any change in any way, shape, or form in his wife. Should I have known her ailment, he wrote, I would at once without doubt, taken proper measures for her safety.

When Mary was expecting their second child, she was sent to Alert Bay well in advance of its arrival. All this planning was to no avail however as the baby contracted pneumonia on the boat ride to Pine Island and died shortly thereafter. The master of a steamship that frequently passed the station and would throw off a bundle of newspapers to the isolated couple had the following to say of Mary: She would run that light and she would row her boat into Sushartie Bay and get anything she wanted. Mary was even known to row twenty-two miles to Port Hardy at times, but only when the seas were calm, as landing on rockbound Pine Island could be very dangerous.

Rex P. Brown arrived on Pine Island with in 1957, and in 1963, he received a fifty-dollar award for designing and constructing an extended aerial carriage servicing platform. The platform improved the servicing and maintenance of aerial tramway equipment and was installed at other sites on the West Coast.

In an article printed on Christmas Eve 1966, Keeper Brown explained how he would be spending the holiday at the station with his wife and their two children, aged eight and six. Planning for Christmas started had to start well in advance. Christmas cards had to be purchased a year in advance, and the traditional turkey was ordered in September, so it could be delivered to the island in early December. No visitors could come to the station during the winter as weather conditions made landings risky if not impossible.

Just how bad the seas could be was brought home in February 1967. Gale force winds were blowing as Keeper Brown and his wife retired one evening, but sleep was impossible due to the heavy surf pounding the island. Around 11:30 p.m., they heard chains clanking against the stations fuel tanks and went out to investigate with Assistant Keeper J.P. Lewis. The sea had already broken a window in the engine room, which they patched with plywood, and then returned to the safety of the Browns dwelling to fill out a damage report.

A short while later, a fifty-foot wave crashed onto the islands rocky shore, obliterating the fog signal building, pushing the engine house up to the Browns front step, washing away two 2,000-gallon fuel tanks, and dislodging the radiobeacons antenna from its base. The lighthouse, a square, pyramidal, skeletal affair that had replaced the original lighthouse years earlier was only slightly damaged; a hole had been punctured in the bottom of the sheathing that surrounded the central stairway.

Not knowing if another mountainous wave was speeding toward the island, the Browns fled with their two children and the Lewises into the woods behind the station, where they built a fire and spent the night. A helicopter arrived the next day to survey the damage. The tower was reactivated the next night using an incandescent oil vapor lamp, and the Department of Transport estimated they could have a new foghorn set up within a week. The Browns left Pine Island shortly after the terrifying incident for Victoria where Rex served at the Coast Guard station.

In 2001, the tower that survived the giant wave was replaced by a cylindrical white tower that today displays a flashing red light. The lantern room from the earlier tower sits atop a lighthouse that is part of the Campbell River Maritime Heritage Center. New dwellings have been built farther inland on Pine Island, which now also serves as the point where pilots board vessels arriving from overseas and help direct them safely to port.

For a larger map of Pine Island Lighthouse, click the lighthouse in the above map.

Pine Island Lighthouse is best seen from the water and should be visible from the ferries that serve the Discovery Coast and Inside Passage from Port Hardy. A lantern room, lens, and foghorn used at Pine Island are now located atop the faux lighthouse that is part of Campbell River Maritime Heritage Centre.