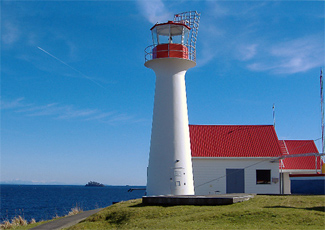 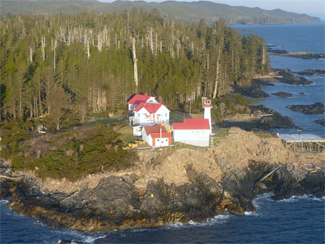 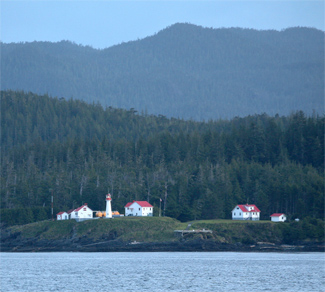 In 1864, Captain George Henry Richards, commander of the survey ships HMS Plumper and HMS Hecate, named Balaklava Island, an island situated roughly twenty-one kilometres (thirteen miles) northwest of Port Hardy, after a Crimean War battle, fought a decade earlier. During the Battle of Balaklava, General James Yorke Scarlett led the Charge of the Heavy Brigade in a rout of a more numerous Russian force. The Charge of the Light Bridage, the subject of the famous poem of the same name by Lord Alfred Tennyson, occurred the same day but led to heavy British casualties. Captain Richards named the northwest tip of Balaklava Island after the courageous General Scarlett. Christie Passage runs between Balaklava Island and neighboring Hurst Island, and the Department of Marine decided Scarlett Point would be an ideal spot for marking the juncture of Christie Passage and Gordon Channel. The following information on the lighthouse appears in the Annual Report of the Department of Marine for 1905:

A lighthouse was erected on Scarlett point, Balaklava island northwest point of the entrance to Christie passage, and was put in operation on April 12,1905.

The lighthouse stands 100 feet back from the water's edge, at the small depression in the eastern extremity of the point. It is a rectangular, wooden building with a hip roof, surmounted by a square, wooden lantern rising from the middle of the roof. The sides of the building and lantern are painted white, and the roofs [sic] red. The lighthouse is 37 feet from its base to the ventilator on the lantern.

The light is a fixed red dioptric light, of the seventh order, elevated 90 feet above high water mark, and visible 10 miles from all points of approach by water.

During the period in which this lighthouse was being built, a temporary fixed white light was shown near the site of the lighthouse.

The building was erected by days' work under the foremanship of Mr. G. Blain, and the amount expended to date has been $7,642.66.

James William Davies, Scarletts Point first keeper, didnt last a year. Next was Theodore Nelson, a bachelor, who was paid an annual salary of $450. On the evening of April 20, 1908, the schooner Clara C., loaded with a cargo of gasoline, exploded off the northern end of Vancouver Island near Cape Scott. The eleven men aboard hastily jumped into two fishing dories and made it to Scarlett Point Lighthouse where they were fed and sheltered by Keeper Nelson until the fishing steamer Celestial Empire picked them up a few days later. Marine Agent James Gaudin thanked Nelson for his humanity and assistance, but after Gaudin was unable to secure him a pay increase, Nelson resigned in September 1908.

Agent Gaudin recommended that William Hunt, who had served briefly as an assistant at Pine Island Lighthouse, be appointed the next keeper at Scarlett Point. Hunt moved his Indian wife and two sons to Scarlett Point in 1908, and over the coming years, the family would grow to include a total of ten boys and a girl. Vivian, one of the middle sons, was paid ten dollars a month to haul mail and supplies between Port Hardy, Scarlett Point, and Pine Island. I used to wait for what looked like a good spell of weather, Vivian recalled, but my father smoked plug tobacco in a pipe. That caused me some trouble. When he ran out of tobacco, I went to Port Hardy no matter what the weather was like. In good weather, with a good tide, I could make the trip in four hours. But sometimes, when it was bad, Id be eight hours getting across.

Jim Davies, the first keeper, didnt have a fog signal so he would go out every once in a while, during periods of poor visibility, and fire off his shotgun. In 1907, a hand-pumped foghorn was given to Keeper Nelson so he could answer steamers fog whistles. A year after Keeper Hunt arrived at Scarlett Point, a fog bell was suspended in a small wooden tower, erected by days labour at a cost of $269.75. According to Vivian Hunt, the big brass bell weighed 1,200 pounds and its striking hammer twenty. There was a weight on a rope, Vivian said, and youd pull the weight up to the ceiling. As it came down, it turned the gears that swung the hammer against the bell. It was good for about half-an-hour, then it would have to be pulled up again.

A diaphone fog alarm was installed in 1915 in a building constructed east of the lighthouse, but that didnt stop a Scandinavian ship from running aground nearby the following year. As Keeper Hunt rowed out to rescue the crew of the ship, which had a gaping hole in its bow and had lost its lifeboat, the captain leaned out over the his ships railing and announced: I know all the rocks around here. And this, pointing to the one that had punctured his bow, is one of them!

Vivian wasnt allowed to go anywhere just to play, as his father thought that was just foolishness, but if he wanted to go somewhere to work, then that was okay. Starting at the age of fifteen, Vivian spent part of the year fishing, logging, and hauling supplies. In 1920, Vivian married Irene Jennings, who was living on Hurst Island, where her grandparents had a homestead. After being caught trying to elope at the age of sixteen, Irene was sent to British Columbia, where her father was working as an engineer in a lumber camp. Vivian built a small home for his bride near Scarlett Point Lighthouse, and there he delivered six of the couples ten children. I had a little book, Vivian said, and it told me all I needed to know to be a midwife.

On February 22, 1930, Vivians brother Tommy set out in rowboat to deliver supplies to nearby settlers. As far as I can make out, a comber must have struck the boat and turned her right over, Keeper Hunt reported to the marine agent. He had his rubber hip boots on when he left here, he had them both off when we found his body next day. Tommys mother grieved his passing, and one day, a few months later, she felt particularly ill and went back to bed. Vivian was sent to retrieve a doctor, but mother passed away while he was still within sight of the station.

On July 21, 1940, the citizens of Port Hardy gathered to see their mayor award the Imperial Service Medal to Keeper Hunt, who had retired at the end of 1939 after having spent over thirty-one years at Scarlett Point. Vivian Hunt took charge of the lighthouse after his fathers retirement, but the Department of Marine sent George Smith to replace him in 1941. Jobs like that were given to veterans, and I wasnt one, Vivian said, so they moved me out to make way for a man who was.

Upon leaving the lighthouse, Vivian moved his family into an old logging camp floathouse, which was pulled up on land given to Vivian by his father. In 1957, Irene left Vivian and returned to Washington, where she married her childhood sweetheart, whose wife had passed away. When my wife left, she told me to get married again, Vivian recalled. I told her, Oh no, 36 years is enough punishment! Vivian kept rowing to and from Scarlett Point until 1979, when his home there was looted and burned to the ground. Homeless at the age of eighty-four, Vivian was forced to move in with friends at Port Hardy, where the following year he declared: They tell me Ill live to be 110. Ill go when God says, Come on now old man

In November 2019, Keeper Ivan Dubinski purchased a virtual lottery ticket at playnow.com that ended up matching all ten numbers and earning him a million dollars. Keeper Dubinski, who has been a keeper for over twenty years, says he will retire soon and give some of the money to his family and use the rest to purchase a home on Vancouver Island.

For a larger map of Scarlett Point Lighthouse, click the lighthouse in the above map.

Scarlett Point Lighthouse is best seen from the water and should be visible from the ferries that serve the Discovery Coast and Inside Passage from Port Hardy.


When Jean Bartle's father was serving as a relief keeper on Scarlett Point around 1973, Vivian Hunt escorted them up a trail that he kept clear with a machete to a small lake, where they witnessed over fifty eagles bathing in the fresh water after feeding in salt water.